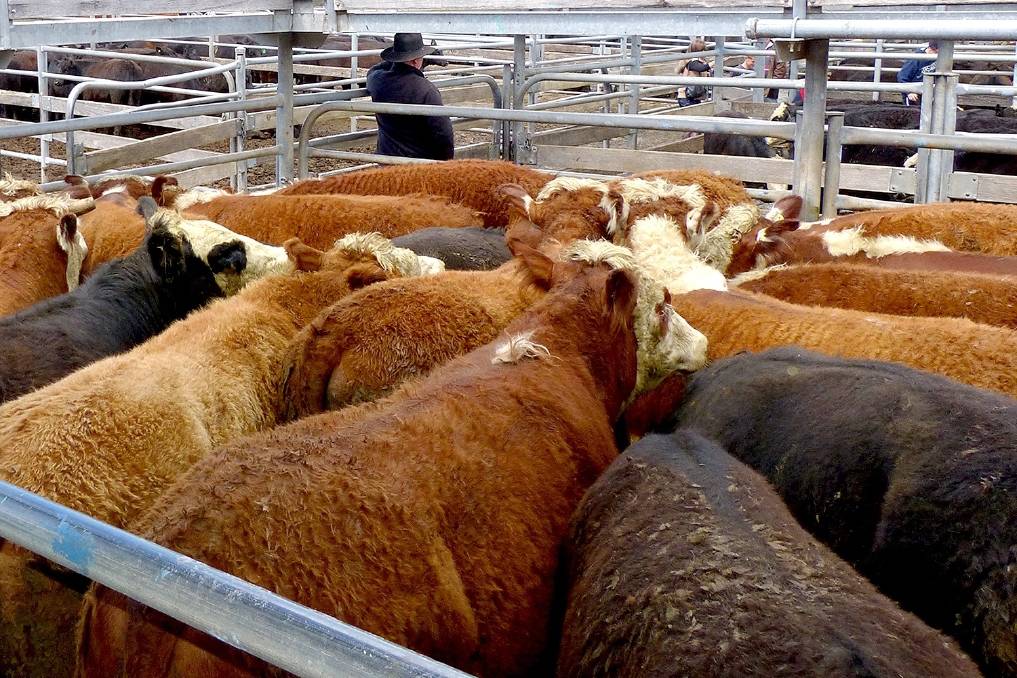 CATTLE buyers hit the brakes on surging cattle prices early this week resulting in a slight dip to the EYCI to 486.5c/kg.

CATTLE buyers hit the brakes on surging cattle prices early this week resulting in a slight dip to the Eastern Young Cattle Indicator (EYCI) to 486.5 cents a kilogram (carcase weight).

Wagga Wagga's Monday cattle market was about 15c/kg cheaper for young well-finished cattle contributing to the EYCI calculation, while sales on the same day at Ballarat and Pakenham in Victoria, Toowoomba in Queensland and Forbes also followed suit to varying degrees.

Warwick in Qld and Inverell were also cheaper on Tuesday.

The rebels to the cheaper trend were pretty much led by NSW markets with Tamworth, Gunnedah and Scone noted standouts and recording individual sale averages above the EYCI.

But even though the Wagga market was significantly cheaper than the week before, it was still about 20c/kg higher than the EYCI on Monday.

Rodwells agent Peter Power, Wagga Wagga, said he expected the market to level out a little in the short term as a few more secondary type stock enter the market.

"It's being driven by the time of year and we are starting to see those wintery type cattle at the sales now, along with the better finished stock which are keeping the market firm," Mr Power said.

His concern was that some of the lighter cattle being offered now would normally be sold from about September to November.

"So come spring time, there's likely to be much tighter supplies than normal," he said.

At the same time the supply of stock entering the market and processed for slaughter in Queensland has been extremely high and helping to keep a lid on values further north.

"Queensland's a big cattle paddock and the better prices are certainly bringing them out of the woodwork," Mr Power said.

Even so, the price gap between the markets in the north compared with those in the south remains unusually wide.

Mecardo analyst Augusto Semmelroth said for several weeks now the price differential between young cattle in the north and south has been as much as 30c/kg, while for heavy steers it's up to 110c/kg.

"That's by far the largest premium (for heavy steers in the south) on record," Mr Semmelroth said.

Last week Mr Semmelroth's analysis indicated that while the EYCI was still quoted below 490c/kg, the average price paid for EYCI cattle in southern yards (Dubbo and south) was already at 511c/kg.

"North of Dubbo, the average price is only 480.75c/kg as lower prices in Queensland yards weigh down on the northern average price," he said.

"On the finished cattle market front, Victoria and NSW saw prices rally again last week, with the heavy steer indicators up 15c/kg to 524c/kg and 9c/kg to 528c/kg.

"In Queensland, on the other hand, prices eased 6c/kg week-on-week to 410c/kg.

"This puts them at a 105c/kg to 110c/kg discount to their southern counterparts."