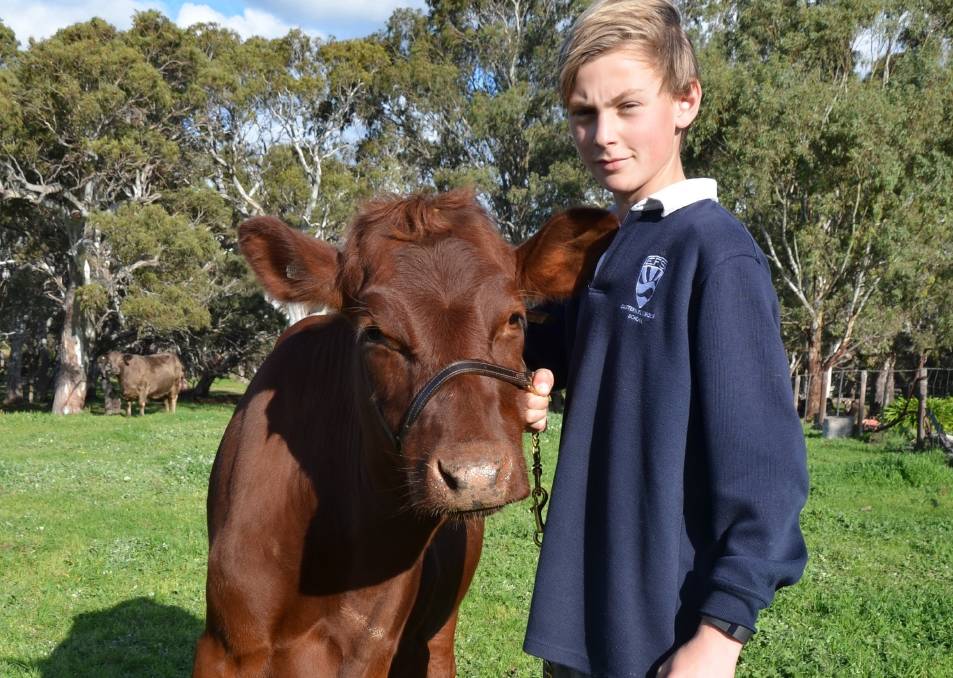 THE Follett name is commonly associated with wine these days but one member of the family is hoping to bring back its association with the dairy industry.

THE Follett name is more commonly associated with quality wine these days but one member of the next generation is hoping to bring back the family's association with the dairy industry - particularly the Illawarra breed.

This year the Bremer View prefix will be on show at the Royal Adelaide Show for the first time since 1991, as new studmaster Tom Follett, 13, Langhorne Creek, restarts a long tradition.

"I've loved cows, since I could walk," Tom said. "Ever since I was little I wanted to be a dairyfarmer."

It follows a long family tradition, with stud Illawarras last shown by Tom's grandfather Ken Follett, who has been a member of the Dairy Cattle and Swine Committee at the show for 30 years, despite leaving the industry in the early 1990s.

"I never mentioned anything to Tom about dairy cattle at all, except he knew I was on the dairy committee," Mr Follett said.

"He took it on himself to study the herd books, and then he almost knew more about our cows than I did myself. He would follow-up cow lines and ask me questions."

Mr Follett said at the show four years ago he came across Tom chatting with several of the established breeders of Illawarras, and his passion was very clear.

The Follett name has been associated with the Illawarra breed for more than 80 years, but it has been linked with dairy for much longer.

It was Mr Follett's father, Len, who started the Bremer View Illawarra stud in 1932.

Mr Follett said the family had combined running the dairy with a vineyard for many years but in the mid 1980s, a discussion on the future of the business led them to focus on a wine and value-adding path, with the first Lake Breeze wine made in 1987.

With an emphasis on winemaking, the stud was dispersed in February 1992.

Tom is restarting the stud slowly, and has two stud heifers and one cow, with another calf due soon, and all three will be shown at the Royal. It began with an offer to Tom from Ian Mueller, Glenbrook Illawarras, Murray Bridge, of a heifer calf, Glenbrook Belle 50.

The calf is the direct descendant of the Belle line, which Mr Follett said was "probably my best and strongest family". From that heifer he bred his first heifer calf, Bremer View Belle 73.