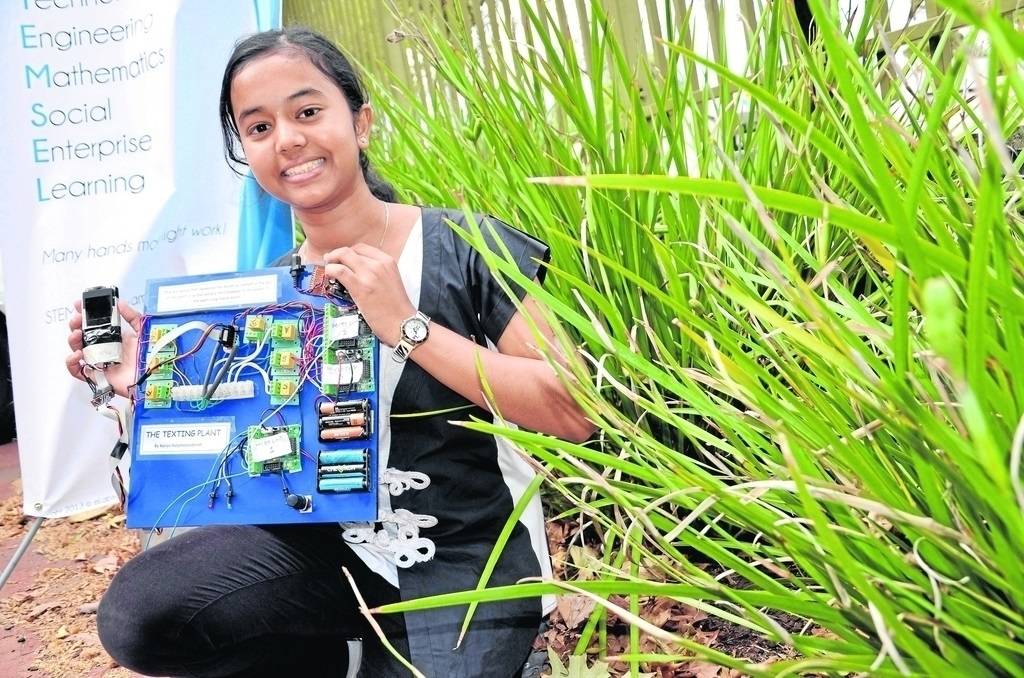 Kaviya Kalyanasundaram and her remote sensor.

A DINNER conversation with her parents was all it took to inspire Mitchell Park teenager Kaviya Kalyanasundaram to invent a remote sensor that can alert farmers to the water needs of plants.

A DINNER conversation with her parents was all it took to inspire Mitchell Park teenager Kaviya Kalyanasundaram to invent a remote sensor that can alert farmers to the water needs of plants.

Her mother, Kavitha Shanmugam, is a horticultural trainer and her father Kalyanasundaram is an agriculture professor at an Indian university.

Kaviya, 14, said she decided to use her skills in electronics to solve this issue. The result was a 'texting plant', which has a device attached to soil near the plant and sends a text message when water levels drop.

Kaviya got involved in electronics through STEMSEL club, joining in Year 5 after a meeting at the Royal Adelaide Show.

She now attends the Australian Science and Mathematics School.

She said the device took about seven months from idea to creation.

It was on display at the 2011 Royal Adelaide Show where it won the Industrial Application section in the electronics competition.

It was also entered in the AMP Tomorrow Fund, a grant opportunity open to all Australians working to make a difference in their chosen field. Kaviya received a $5000 grant to take her texting plant to the next stage.

"I'm now trying to make it with a solar panel, bluetooth connectivity and water-proofing so it can go anywhere," she said.

She estimates there is six more months of work to make these additions and get it commercially ready.

While in southern India in March last year, Kaviya started an international chapter of STEMSEL, which she oversees.