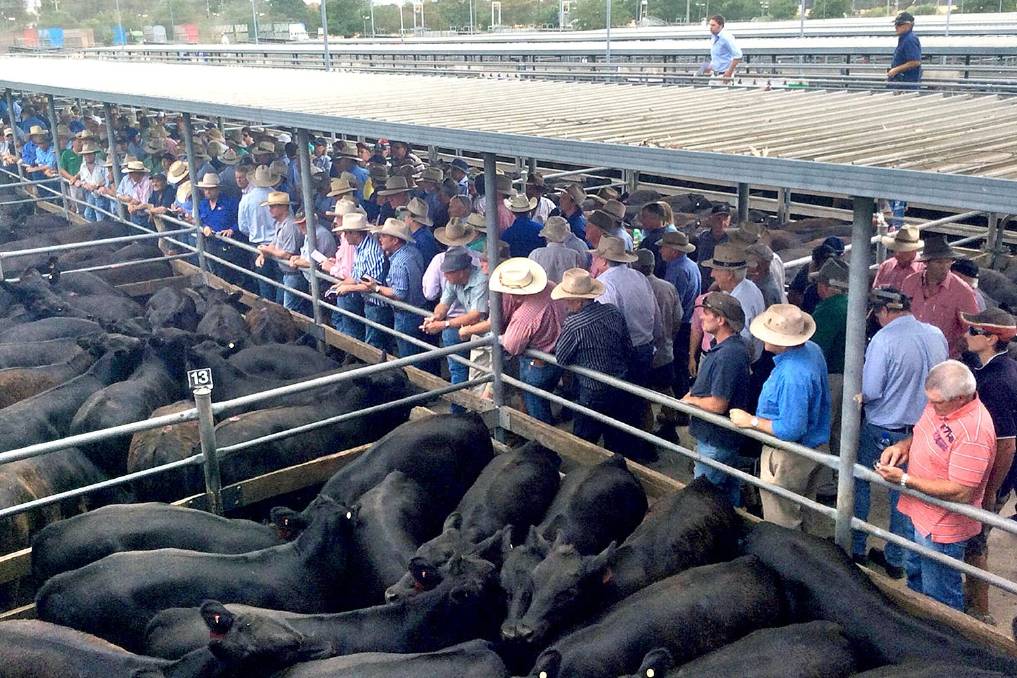 PIVOTAL decisions will be on the agenda for many beef producers after the first 2015 sales delivered a significant price kick.

PIVOTAL pre-autumn marketing, weaning and feeding decisions will be on the agenda for many NSW beef producers in the next few weeks, after the first 2015 livestock sales delivered a significant price kick.

A red hot market kicked of the steer portion of the first day of the Wodonga weaner sales on Thursday, with yearling steers setting the pace, making $1195 (232c a kilogram). The bulk of the weaner steers sold from $720 to $975 with their live weight equivalents ranging mostly from 235c/kg to 260c/kg.

Good Christmas and new year rainfall in many parts have placed producers in a position where they now have useful options in the lead-up to autumn.

Prime sales across the State generally opened dearer pushed up by recent rain and tight yardings, while Victorian weaner sale activity has been unusually strong with northern buyers helping drive prices to highs of $975 a head for weaner steers.

Although not due to be calculated until next week, the Eastern Young Cattle Indicator (EYCI) is expected to start the year much higher than it left 2014.

A quick analysis by Angus Brown from Mecardo revealed just four years in the past 10 when the EYCI opened in January 20 cents a kilogram (carcase weight) higher than its December close.

"Given the rain, this could well happen again with the EYCI at 390c/kg to 400c/kg in the first week of sales," he said.

Cattle demand was clear early this week at Tamworth prime sale where the National Livestock Reporting Service (NLRS) said "restockers were keen to put anything into the paddocks and showed little regard for price".

Medium weight yearlings bought by restockers topped at 246c/kg, while a heavy pen to slaughter returned $980 a head.

Heavy cows and heifers to slaughter sold in excess of $1000.

Yearling steers knocked down to a feedlot topped at 245c/kg at Gunnedah on Tuesday where NLRS estimated the market was as much as 25c/kg dearer, while heavy yearlings soared to $1293 at Forbes and cows made $1443.

Demand at Monday's Wagga Wagga's prime sale was buoyant, lifting most categories by 10c/kg, or more for some well bred lines.

With northern weaner sales looming, the preference among many northern coastal producers appears to be to capitalise on cattle they have been able to retain with the view to offering high quality calves at the specialist February to April sales.

On the Northern Tablelands those who scored rain are also looking at what can be done to efficiently make pre-sale weight recoveries, particularly in yearling steers.

With abattoirs swinging back into action this week and sales now underway, beef consultant Bill Hoffman said the next few weeks would be critical in providing an indication of how the next few months could unfold.

Those with reduced breeder numbers after the past year's dry seasons were also doing the sums on what they could afford to pay for replacements.

"It will be hard to find good lines, but when they are there, they'll make money," he said.

Agents said cattle traders who now had some feed at home were likely to get into the market quickly, particularly if the break in the season looked like continuing and spreading.

North Coast Local Land Services director and Casino district weaner producer Neil Summerville, Sexton- ville, said most nearby beef districts were "still on a knife's edge, but on the right side of the edge at the moment".

General manager Rob Sinnamon said it was good grass-growing rain, but the operation was not fully out of the woods, with dams still to fill and some crops still needing moisture.

Weaner producer Daryl Amos, "Passchendaele", Old Bonalbo, received more than 100mm in several storms from late December, although there was "not a lot of substance in pastures yet".

"But it was the break we were looking for and some dams are half full. We can make plans for autumn."