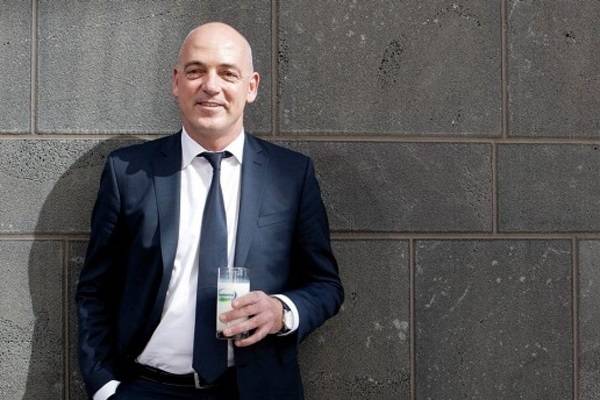 FONTERRA chief executive Theo Spierings says he is positioning the dairy giant to capitalise on the long-term surge in dairy consumption.

FONTERRA chief executive Theo Spierings says he is positioning the dairy giant to capitalise on the long-term surge in dairy consumption as he finalises Fonterra's $700 million joint venture with China's Beingmate and wrestles unprecedented volatility in world markets.

After booming to record highs of about $US5000 a tonne last year, milk powder prices have halved and Fonterra, which generates the bulk of its $NZ18.3 billion ($17.6 billion) in revenue from powders, has been scrambling to cope with the boom and bust.

"We are in volatile times of prices up and down 60 per cent in a year. That is extreme volatility," Mr Spierings told Fairfax Media.

"Russia has been locked up with sanctions. In West Africa, Ebola has had a big impact, because if consumers cannot move, it impacts sales, and events in the Middle East and North Africa have had a big impact. These are key events in three areas that are normally heavy importers of milk."

Alongside the swings in commodity prices and geopolitical unrest, Fonterra – which is owned by its New Zealand farmers – has been hit by food safety scares and backlash from sections of its farmer base, due to the big swings in milk price payments.

It has made for a tough few years for Mr Spierings at the helm of Fonterra, which is the world's biggest dairy exporter, New Zealand's most important company and the second-biggest dairy processor in Australia.

Investors in the Fonterra Shareholders' Fund, which listed in 2012, have also been disappointed as the unit price has performed poorly, dividends have been cut and earnings have been weaker than expected.

"Talking about where the (New Zealand) milk price is, and earnings … people are upset about it," Mr Spierings admitted.

But he is confident "the silent majority" of farmers and most investors understand that market conditions have been extreme and support his strategy to shift sales to higher-value dairy products.

A big part of the strategy is to create "multi-hubs" that connect growing milk pools in New Zealand, Australia, South America and Europe with their highest-value uses.

Mr Spierings said that the Beingmate deal, which will connect Australian milk with Chinese infant nutrition buyers, is a prime example of the multi-hub strategy in action.

'Gone downstream to buy in'

"We are now getting the last parts of the agreement together … we have gone downstream to buy into the No.1 baby food player in China and have put our Anmum brand into their distribution network," he said.

As part of the deal, Fonterra has acquired 18.8 per cent of Beingmate, China's biggest infant formula company.

The joint venture will acquire Fonterra's infant nutrition and milk powder plant at Darnum in Victoria and is set to start distributing product through Beingmate's 80,000 retail outlets in China.

The Darnum plant can produce 50,000 tonnes of infant formula a year and 300 tonnes of milk powder a day.

In recent years, Australia has been a tough market for Fonterra due to intense competition and the power of supermarkets Coles and Woolworths.

But, after consolidating its brand position to focus on core brands such as Mainland, Perfect Italiano, Western Star and Bega Cheese, Mr Spierings said the plan is not to run away from the Australian market but to have the right balance between domestic and export.

'Integrated play from end to end'

"I want an integrated play from end to end in Australia," he said. "We collect milk and the first entry point is cheese, because cheese, whey and nutritionals is our play in Australia."

In producing cheese, whey is created as byproduct, which is then taken to Darnum where it is used to make infant formula.

The Chinese infant formula market is expected to double to $33 billion in five years.

Mr Spierings said that Chinese dairy operators are under a lot of pressure after buying aggressively when drought was buoying dairy commodity prices.

"It is tough times in China at the moment, with Chinese milk prices having followed the global scene. There is a lot of fresh milk around and people are reluctant to take it," Mr Spierings said.

He said the fresh milk price has dropped from 5 renminbi a litre to just 2 renminbi a litre, and after the overstocking in China, a lot of customers are stuck with high-priced inventory in a market with temporary oversupply.

But he is confident in the long-term trend, with global dairy demand tipped to boom to 900 billion litres by 2023 as middle class numbers surge in China, Brazil, Indonesia and India. Globally traded dairy is expected to be just 65 billion litres in 2015.

The number of consumers in those markets is expected to double to 4.2 billion with a middle class of more than 500 million consumers.

"Every five years over the past 20 years, China has doubled its demand for dairy," Mr Spierings said.

"The one-child policy has been softened and more babies are being born, from 18 million a year to 25 million a year. All the long-term dynamics look very good."

The Dutchman is also optimistic that Australia can reverse a decade of dwindling milk production and start growing again from 9 billion litres today back toward 15 billion litres.

But he said it won't happen overnight and can't be done by trying to copy New Zealand.