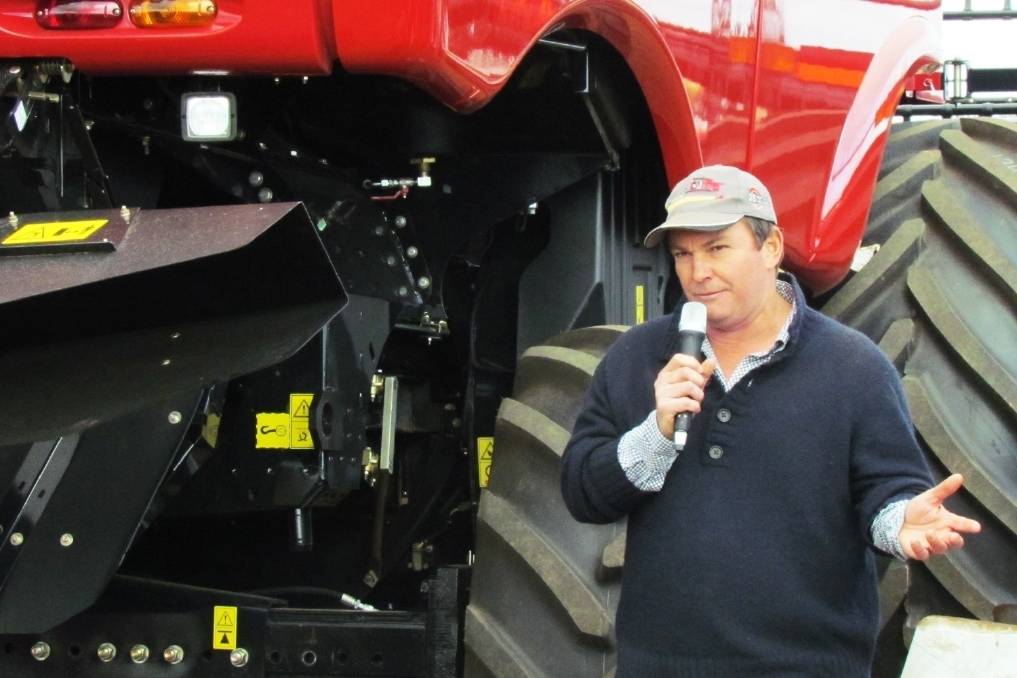 Cameron Warne at the recent Birchip Cropping Group (BCG) main field day speaking on the use of a chaff deck.

ANNUAL ryegrass is public enemy number one for many croppers, but the weed that strikes real fear is broadleaf wild radish.

ANNUAL ryegrass is commonly regarded as public enemy number one for croppers across Australia, but ask many what weed truly strikes fear into them and it is the broadleaf wild radish that is their major concern.

It has a range of resistances to popular and cheap chemicals and its durable seed can lay dormant for up to 10 years.

Cutting down viable wild radish seed has been a big part of the push, mainly led out of Western Australia, towards post-harvest seed management, whether it be chaff carts or the more expensive Harrington Seed Destructor.

Farmers in the Victorian Mallee are experimenting with a concept far more modest, yet effective.

Cameron Warne and Link McClelland spoke at the recent Birchip Cropping Group (BCG) main field day on the use of a chaff deck, which is a simple bolt-on to the header that forms the chaff into a windrow which can then be burnt.

"The major advantage with this system is the cost, it is a lot cheaper than a chaff cart or a seed destructor," Mr Warne said.

He said he had burnt chaff windrows last year and was satisfied with the job, although he said the process of burning the windrows could be relatively laborious.

A group of Wimmera farmers and advisors recently toured the so-called 'radish belt' of WA around Geraldton.

Agritech Rural Dimboola branch manager Darren Jones said the situation in the west, where the radish problem is more advanced, was frightening but also confirmed radish could be controlled.

"There's no doubt it is something they have to put an awful lot of work into, but equally, with a mix of management techniques, the problem can slowly be brought under control."

Mr Jones said there was resistance to Group B herbicides (imis and sulfonylureas), along with Group I (phenoxys) and C (simazine / atrazine).

"They were putting out massive rates of atrazine and it was like the paddock hadn't been sprayed."

He said techniques such as soil inversion had been used, both for weed control and to improve the sandy soils of the region, but added it was expensive and required big machinery to implement.

Antwerp farmer Nathan Albrecht said methods such as windrow burning appeared to have a future, while he said other means of weed control, such as out-competing the plant through heavy sowing rates, were also being used by WA farmers to beat the weed.

Cereals are being sown at 100 kilograms a hectare and on 17-centimetre spacings as part of this plan.

Mr Jones said in terms of herbicide management, it was critical that full rates were applied and that chemistries were rotated.

He advocated strategies like the double knock to ensure resistance does not become a problem.