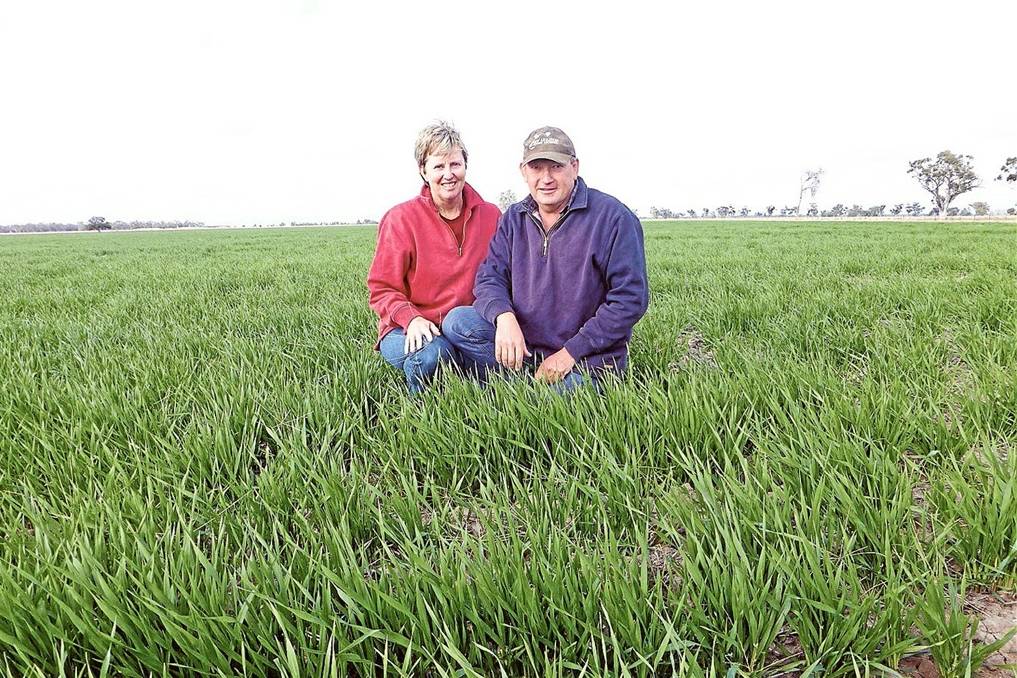 Jenny and Craig Bradley, “New Armatree”, Armatree, recently checking their Hindmarsh barley for issues like weeds, current soil moisture level and possible need for extra nitrogen. Craig Bradley stresses the importance of having a good knowledge of all these issues when making post emergence nitrogen decisions.

CROP and pasture fertiliser decisions, commonly representing the most costly farm input, for Central West farmers Craig and Jenny Bradley, “New Armatree”, Armatree, are based on best available science, a sound appreciation of risk, as well as knowledge of individual paddock fertility and crop yield expectation.

CROP and pasture fertiliser decisions, commonly representing the most costly farm input, for Central West farmers Craig and Jenny Bradley, “New Armatree”, Armatree, are based on best available science, a sound appreciation of risk, as well as knowledge of individual paddock fertility and crop yield expectation.

Mr Bradley, until 15 years ago an agronomist with Incitec, worked closely with farmers refining fertiliser strategies based on best science.

On their 1450-hectare properties, with about 450ha cropped annually, and lucerne and native grasses sharing the remaining area, with 1400 merino ewes and a 250-head Border Leicester stud, rotations are very important with productive legumes supplying a major part of the Bradleys’ crop nitrogen needs.

While rotations are not fixed and instead altered according to factors like seasonal situations, in general wheat is followed by chickpeas or lupins, which is followed by wheat and perhaps then a barley crop, before sowing down to a four-or-so year lucerne phase.

In their 525-millimetre average rainfall environment, with moderate summer dominance, for reliability, lucerne is sown on its own in the year following cropping with annuals.

Craig Bradley said legume crops and pastures in the rotation supplied most of the cereal crops’ nitrogen needs.

However they would add extra post sowing nitrogen to the last cereal in the rotation via urea or liquid nitrogen if their reckoning indicated a likely high yielding year. Predicting this could be problematic but it was helped by knowledge of soil moisture level.

Accurate forecasts were also important to assist with post sowing nitrogen use.

Soils are variable across the properties, with lime used to correct surface acidity in some areas and gypsum to correct sodicity in others.

Overall phosphorus was initially low to moderate across the various soils and 50 to 80 kilogram a hectare MAP has been used with the rate depending on soil tests.

The most important feature of their farming operation is “farming soil moisture”.

What they mean by this is they save every drop of rainfall that can be saved in the fallow period.

Prompt fallow weed control is vital even if it means more sprays and stubble retention is vital.

While stock are allowed to graze stubbles, it’s never at the expense of prior weed control or losing too much stubble.

The only cultivation practised is at the end of the lucerne phase.

Production of prime lamb is a major part of the business and depends on well-managed pastures.

Mrs Bradley stressed lucerne and native pastures, which contain a variety of winter legumes, were regularly rotated and rested (flexible rotational grazing) and good ground cover levels were maintained to ensure rainfall was not lost in heavy rainfall events.

A drought lot was used when necessary and soil deficiencies were addressed where required.

Bob Freebairn is an agricultural consultant based at Coonabarabran. Email robert.freebairn@bigpond.com or contact 0428 752 149.