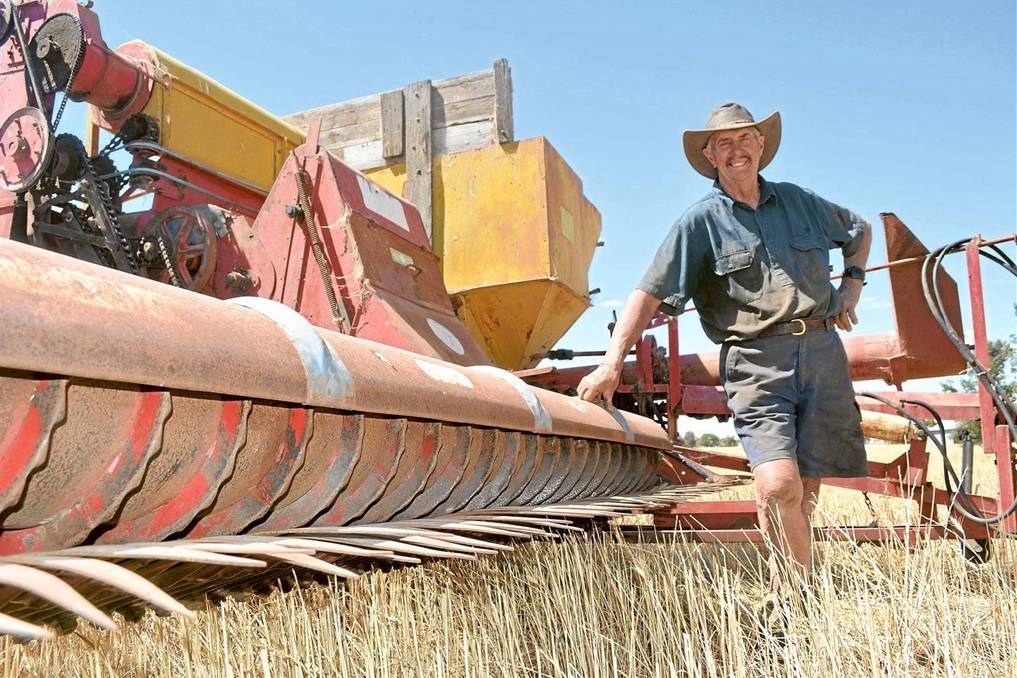 WITHOUT the mod-cons of speedos and the like, gauging the speed of a vintage header is more or less an estimate, give or take.

WITHOUT the mod-cons of speedos and the like, gauging the speed of a vintage header is more or less an estimate, give or take.

“A bit over walking pace” is the rate Pleasant Hills farmer Kerry Pietsch, “Warrangong”, stripped his 2013 crop, between Wagga Wagga and Albury, but he wouldn’t have it any other way.

Looking across the paddock as Kerry demonstrated his vintage Horwood Bagshaw header it all seemed so simple – no gauges or gadgets or modern distractions, just the wind in his hair and wide open spaces.

A self-confessed fanatic of all things old-fashioned, Kerry has an extensive collection of vintage headers - 20 of them to be exact.

He happily snubs the modern day “luxury” header for those of the golden era.

“I have a fascination with old machinery,” said Kerry, pictured with his vintage Horwood Bagshaw header.

“I love to source old harvesters and restore them – there’s not many things that can beat me.”

Kerry said most of his collection had been bought privately although there had been some rare ?nds at clearing sales.

His love of vintage stemmed from his childhood, he said.

“My father was a very good blacksmith and I learnt a lot from him and by watching other people,” Kerry said.

One machine Kerry holds close to his heart is a 1935 Sunshine harvester – owned originally by his father many years ago.

“There were seven boys in dad’s family and they bought two auto headers brand new and shipped them by rail.

“Off the top of my head I’d guess they paid about 400 pounds for one back then.”

Having such a large collection comes at a price though – on top of the cost of sourcing spare parts there is also the matter of storing the headers.

“I keep putting up sheds to feed the habit, but I’m getting very fussy at the moment because I’m getting short of space,” he said.

Then there’s running the machines.

Even though they poke along at a quarter of the speed, fuel ef?ciency isn’t on the “pro” list for the headers Kerry uses.

“You put a gallon (4.5 litres) of fuel in them and it doesn’t go very far before the unit is coughing and spluttering and she’s empty,” he laughed.

“Fuel consumption is terrible – if it’s not diesel it’s unbelievable.”

In a bid to open the eyes of young men and women across the region Kerry and his wife Jan will showcase the vintage collection on February 9.

“I woke up in the middle of the night and decided I was going to hold a harvest day so locals can see them in action,” Kerry said.

“I’d say 90 per cent of young people wouldn’t have seen any old headers at all, especially not in working order.”

The display will span from horsedrawn, power-take-off (PTO) and self-propelled machines, such as a 1907 Sunshine harvester, to the most modern of Kerry’s collection, a Claas 79.

Demonstrations of scythe cutting and threshing by hand, and sheaf making will kick off the morning.

The Warrangong Vintage Harvest day will be held at “Warrangong”.

Header enthusiast Tom McDonnell will talk throughout the vintage harvest day and locals and out-of-towners are welcomed to come and see the headers on display.

Stalls, souvenirs, food and drinks will also be available.

As a ?nale to the day, a large modern header will work alongside its vintage cousin.

Kerry said the machines exhibited were open to the elements, rich in history and each had a unique story to tell.

“It’s a once in a lifetime opportunity to see history recreated in front of you – it gives you a real appreciation for how previous generations farmed as well,” Kerry said.

Gates open at 8am for a 9am start.

Warrangong is 90km from Wagga.

Follow the road to Lockhart, turn left to Albury, travel 23km to Thomas Lane, turn left and follow the signs.

From Albury, go through Jindera to Walbundrie, then another 30km to Thomas Lane, turn right for 4km, follow the signs.