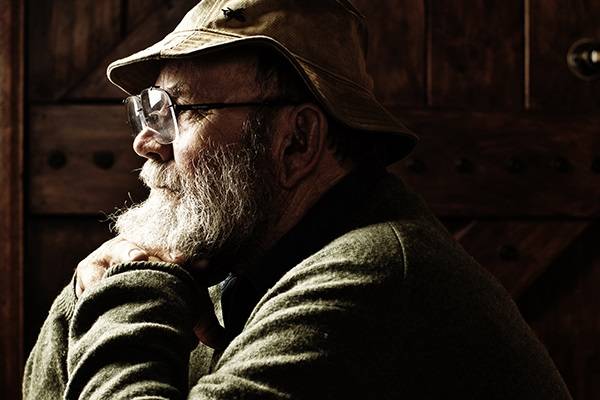 ON A refrigerator door in Tom Brinkworth’s home office a magnet bears the Churchillian words: Never, Never, Never Give Up.

ON A refrigerator door in Tom Brinkworth’s home office - a farmer's kitchen with skillets and meat hooks, cleavers and boning knives, venison chunks and homilies about life and work, and shelves crowded with sauce bottles and condiments - a magnet bears the Churchillian words: Never, Never, Never Give Up.

Whatever else anyone might say about the enigmatic 76-year-old, no one could ever accuse him of giving up, certainly when it comes to accumulating land.

And when asked if that acquisition of land become an obsession, Brinkworth laughs.

Tom Brinkworth, Watervalley Station, 50 kilometres west of Kingston in South Australia, controls one million hectares of agricultural land across 99 properties in his home State and NSW.

Judging by highlighted maps of south-eastern Queensland on his table, he isn't planning on slowing down either.

"Every year we have to run so much faster to stand still," he says and while he won't be drawn on his net worth, he says he is “comfortable”.

“I’m worth more than ten dollars,” he says modestly. On a simple calculation, his assets - including property, livestock and machinery - would exceed $200 million.

He runs 350,000 sheep, 80,000 cattle, produces large quantities of stock feed, has five large cattle trucks on the road permanently ferrying his stock between properties and market, and is constantly on the move himself.

What drives him to acquire more land at an age when most men of his vintage are contemplating retirement? Especially if they have suffered, as Brinkworth has, a heart attack, followed by a double bypass and a stroke.

"There are only two things I know for sure: either you're going forwards or backwards; you can't stand still," he says.

There is a sign on the kitchen door that tells you a lot about Tom Brinkworth's world view.

"The home is superior to the State," it reads.

If a man's home is his castle, Brinkworth's is his fortress against an intrusive state that might presume to poke its nose into his land use methods, his scheme to relocate water on his wetland properties (he has constructed a 27-kilometre ditch on the scale of the Suez Canal to siphon saline water from agricultural land to wetland areas), and his alleged mistreatment of animals.

South Australian court records tell their own story of Brinkworth's brushes with the law. Brinkworth has won and lost his share, including a settlement in the case that caused him more grief than all others, when he was accused, along with his wife Pat, of animal cruelty by the RSPCA.

The action was described in the Adelaide Advertiser as one of the biggest cases of alleged animal cruelty in the State's history, relating to the deaths of hundreds of livestock during the drought of 2006-2007.

Brinkworth denies allegations of willful neglect – he says he was dealing with the worst drought in the State's history.

"Drought can kill your spirits," he says.

"You wonder if (it) will ever end." He deflects questions about the circumstances under which the case was settled out of court, citing a confidentiality agreement after it emerged an RSPCA employee had tampered with evidence.

He might have continued in relative obscurity beyond his home state but his 2012 purchase of the historic 80,000-hectare Uardry Station near Hay in NSW for about $28 million attracted plenty of attention.

Uardry was, if not pre-eminent in the breeding of Australian stud Merinos, ranked in the top five, with a history that includes bloodlines associated with the iconic Hallmark ram, grand champion at the Sydney Royal Easter Show in 1932.

However, within weeks of the purchase, Brinkworth sold the station's birthright in a dispersal sale of 18,000 stud Merinos.

He insists he had an open mind on the sale of the stud but when he calculated the costs after assuming control he concluded retaining it was simply not economic.

Was there also an element in Brinkworth's decision of sticking a finger in the eye of the Merino establishment? He is dismissive of those born, as he put it, with a "golden spoon in their mouths".

Asked whether he would describe himself as a "ruthless pragmatist", he replies: "I've got an awful determination."

Brinkworth recalls his start in business when his father, an Elder Smith and Company stock and station agent who became a chicken farmer, gave him 100 chooks.

By 19, he had taken a loan guaranteed by his father from the local bank to buy five acres at Gawler, north of Adelaide, for a poultry farm and pig pens.

Before long, he had run out of space and secured another 20 acres in the same district.

By the 1960s, his piggery had grown to 5000 pigs - one of the biggest in the southern hemisphere. He would leave home at 3.30 in the morning and get home after dark.

"The harder you work, the more luck you have," he says.

He sold out to finance a move into cattle and sheep farming on a large scale and by this stage had bought land between Kingston and Keith in South Australia's south-east, having added to his holdings in the district over the years.

This area of the state is now the Brinkworth family seat. Elder son Ben, 46, manages his own cropping property and lives nearby, as does younger son Angas, 32. A daughter, Annabel, lives in Adelaide.

"I used to think I was doing it for my family - but it was never for the family, it was for myself."

At which point his wife Pat interjects.

"You're a workaholic. You can't stop."