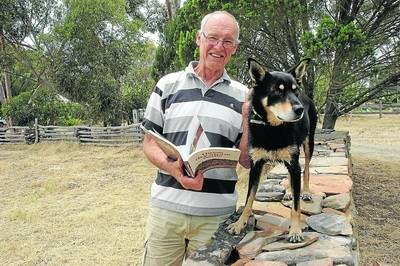 A QUESTION asked by visiting Japanese tourists helped prompt Bruce Munday's decision to write a book on the history of dry-stone walls in South Australia.

A QUESTION asked by visiting Japanese tourists helped prompt Bruce Munday's decision to write a book on the history of dry-stone walls in South Australia.

After taking the tourists to visit Malcolm Linke's property at Keyneton in the Adelaide Hills, one of them asked Bruce – a communications consultant – who had built the stone wall on Malcolm's property?

"I felt inadequate that I couldn't answer his question," Bruce said.

"Afterwards I rang the National Trust and found out no-one else had written a book on the history of stone walls, so I decided to."

"The book is as much about the people as the stone walls," he said.

Bruce has worked on several AusAID projects overseas including visits to countries such as Cambodia and Laos, and runs a 121-hectare cattle property with his wife Kristin.

He now has several other books on the go, but jokingly refuses to say what they are about, or when he expects them to be finished.

"This was just fun for me – a hobby, but it became quite a serious hobby in the end," he said. "I even built a stone wall as part of the process."

He became interested in stone walls and their history after seeing a neighbour pushing down an old stone wall with a front-end loader on a property next door.

"I asked him why he was doing it, and he said because it was old," he said.

A holiday to Cusco, Peru, in South America, which included a trip to historic Machu Picchu, provided further inspiration.

"They have these beautiful stone walls there, but no-one knows how or why they were built, as no written records remain," he said.

"Machu Picchu in particular is intriguing."

While the earliest types of fences in South Australia were post-and-rail, or brush, stone walls were built in abundance from the 1850s onwards, after the Victorian goldrush and the discovery of other minerals, such as copper, encouraged many shepherds to leave their flocks in search of greater riches.

At the time a greater number of farms also began to be located in closer proximity to one another – which meant fencing was soon an essential requirement to stop stock from straying onto neighbouring land.

Bruce says that during this period wire was "prohibitively expensive" and difficult to work with, being 1-centimetre thick.

After a visit to the Upper North by South Australian surveyor-general George Goyder during the 1860s drought, when few pastoral leases were fenced, meaning stock had ruined much of the land around remaining watercourses and dams, Goyder called for producers to fence their properties with either post-and-rail, post-and-wire, brush or stone.