“THERE is a war taking place in Australia, and the warring sides are more unevenly matched than any David and Goliath cliché can convey” – Sharyn Munro, Richland, Wasteland. 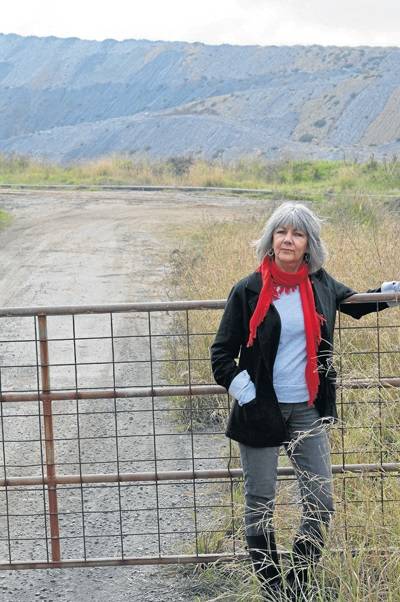 “THERE is a war taking place in Australia, and the warring sides are more unevenly matched than any David and Goliath cliché can convey” – Sharyn Munro, Richland, Wasteland.

APPALLED at what she saw as the unfettered invasion of the Hunter Valley by mining and coal seam gas (CSG) extraction, writer Sharyn Munro set out across Australia armed with a tape recorder to ?nd out what was happening elsewhere.

Sharyn lives in a mud-brick solar-powered cabin in the Upper Hunter, but visiting her daughter and grand-children near Singleton through time, she observed rising levels of thick smog.

“People think it’s the weather,” she says, gesturing to the orange haze across the valley from our meeting place at Camberwell church.

“But it’s not, it clears at about 11am. It’s ?ne dust particulates in the air, over 30,000 times the norm. Every two years new federal pollutant inventory ?gures came out and it’s gone up and I started to get seriously concerned that people in Singleton and Muswellbrook were being treated as collateral damage and only the wishes of corporate coal were being paid any attention,” she said.

“I thought it was so wrong, so unfair and I felt ashamed that this was what we were becoming – in retrospect, that was the genesis of the book.”

Sharyn’s third book is the result of her journey to other mining regions. Called “Richland, Wastleland: How coal is killing Australia”, it looks at impacts of open cut and underground mining, land clearing, loss of agricultural land and water, and the rise of the coal seam gas industry across Australia.

“Knowing the heartbreak of people here in Camberwell, just north of Singleton, I thought it is the human voices that might touch the hearts of ordinary Australians, rather than the facts on health, water and loss of farmland.”

Sharyn says mining companies and the governments that back them have vast public relations resources to put their side of the story forward and she aimed to “unashamedly give voice to the other side, whose plight has been ignored, downplayed, or dismissed”.

Her publisher provided a limited travel budget and she set out for Queensland and Western Australia in an attempt to paint a national picture in a two-year process.

“I was not prepared for the amount of heartbreak out there. It really broke me. People were being ignored, their dreams shattered,” she said.

Mining expansion on pastoral country in Queensland was rapidly growing.

“They are all really big properties – it is not strategic cropping land, but you know, a lot of Australians eat meat,” she said.

Sharyn is not con?dent the NSW government’s much anticipated strategic regional land use policy will resolve simmering issues State wide.

Having participated in community forums, she believes Planning Minister Brad Hazzard and a phalanx of bureaucrats have, in some instances, given little more than lip-service to those who have spoken up.

“I sat through the last government’s attempt at this, and this one is no better, it is just rebadged – the exclusions don’t apply to exploration, and there is all of this heartache and stress.

“You have to be on your toes the whole time in case something sneaky comes up under the radar.”

She believes her journey proved that at present in Australia, coal is unstoppable and unaccountable in its advance.

She also devotes a chapter to “the new frontiers” – the Latrobe Valley and beyond.

“I just think this is not the Australia we want to be and I don’t think other Australians would think that either, but they just don’t know,” she said.

Sharyn is the author of The Woman on the Mountain and Mountain Tails as well as a blog.