AMONG the thicket of New Zealand's perennial debate on 1080, pest control and TB reduction, the latent, multi-million dollar potential of the possum fur industry can go unnoticed. Shay Williamson is an 18-year-old entrepreneurial grafter from the Bay of Plenty who earns between $50,000-$60,000 a year recovering possums by hand, in an industry that is offered no financial incentives or subsidies for making inroads into our premiere pest. 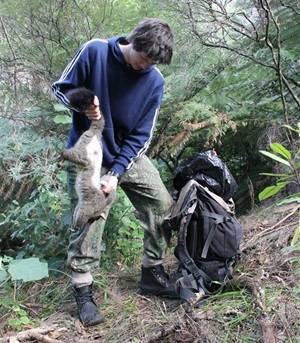 Shay Williamson, 18, of Matata, Bay of Plenty, NZ, has recovered over 10,000 possums in the last two years.

AMONG the thicket of New Zealand's perennial debate on 1080, pest control and TB reduction, the latent, multi-million dollar potential of the possum fur industry can go unnoticed.

Shay Williamson is an 18-year-old entrepreneurial grafter from the Bay of Plenty who earns between $50,000-$60,000 a year recovering possums by hand, in an industry that is offered no financial incentives or subsidies for making inroads into our premiere pest.

"Most of those possums I've taken out of the Ureweras. You get a block in there. My block is pretty inaccessible. It takes a day to walk in and I usually stay in there for about two weeks at a time. You try and pick good weather.

"I run about 160 traps at a time. I use lure: flour and sugar and stuff like that. If I can, I usually pre-feed a line. I usually just chuck heaps of pre-feed out along a big ridge or something. So basically possums just follow it along eating it and then you go back a couple of days later and set your traps with the same lure. That works pretty well."

Shay has been plucking possums full-time since he was 16; in the past two years he estimates he has knocked-off more than 10,000 of the pests.

"One of the facts that is constantly overlooked is that possums are worth a lot of money. I can pull around 5kg of possum fur a day off my trap lines, which is worth over $600 at the current price.

"Per kilo, possum fur is worth more than sheep wool and cow's milk put together. The fact that the possum fur industry is still thriving after all the efforts to poison and demonise them is a testament to how valuable the product really is."

Since this teenager is making way in excess of the average wage, why aren't more people doing likewise?

"It's pretty hard work and I think a lot of it is the knowledge. I mean, I did a lot of hunting and stuff, and Dad did a lot of possuming when he was my age, so I had the knowledge of being able to find my way around in the bush anyway.

"But I think that's probably the main thing: if people got taught all that stuff and if they only got a bit of help - free traps or something to start them off.

"Possums provide a massive resource that is truly unique to New Zealand. In my mind there's no reason why the possum industry can't co-exist with the farming industry. But if the Animal Health Board really believes that possums are a TB problem then they should be spending some money on teaching people how to trap properly and encourage fur recovery.

"Once enough people had the skills and the means to make a living from these animals there would be no need for publicly-funded operations that waste possums. If you want an alternative to 1080 then that's it.

"It doesn't really make sense in them saying, 'It doesn't work. You can't get the numbers down,' because this is all conservation land and there are still people working in there, recovering the fur and making good money at the same time as they're using 1080."

Shay's father, Bob Williamson, adds: "There's no encouragement to help clean up a block where most of these possums are found - in huge big bush areas. It takes a certain person to get off their bum and walk for six hours to get to their block and get started. But there's no help from DoC and I guess that's why there's not a lot of people getting stuck into it."

That lack of help from DoC is exemplified by choppers - flying in vital supplies or transporting possum hunters - not being permitted to land in many conservation blocks or not allowing hunters to cut their own tracks while, at the same time, ceasing to maintain many established DoC tracks. Shay claimed his block by walking into the DoC office at Murapara. "They've basically got a big map with all the blocks marked out on them, and you just pick one. If nobody is in there you just put your name on the block and go in there and do it."

There is no cost to reserve such a DoC block and, naturally, Shay never sees another human being during his fortnight in there. He's invested in a mountain radio as well as a GPS and topographical maps, and will typically shoot both plentiful pig and deer for meals.

As for possum, his two companion dogs thrive on the meat while Shay has no hesitation in partaking himself.

"It's probably similar to chicken - maybe a bit darker. You could put it in a chicken burger or something, and no one would know the difference."

Plucking in excess of 5000 possums per year would put Shay in the "gun" category; it would be safer to assume half that figure for most hunters out there.

"I'm constantly trying different things. That's really what you've got to do because each area is different as well. Where I am now hasn't been touched for about 25 years, so the possums are pretty easy to catch anyway.

Much like a word snake, Shay will shift the fruitless traps to the end of his line and continue on that linear loop about the massive block.

Dawson Furs Ltd in Whakatane buys all of Shay's pluckings. Recovering up to 5kg a day, he currently fetches $125/kg, though that price has fluctuated between $105 and $145/kg over the past two years. The only notable start-up costs are traps, each coming in around $15.

While some state bodies guesstimate 60 million to 70 million possums running wild through the land, others closer to the coalface consider the tally to be not even half that.

"There are no real facts behind that estimate," Shay counters.

"I don't think anyone has any idea how many there are in New Zealand. They don't do much monitoring really."