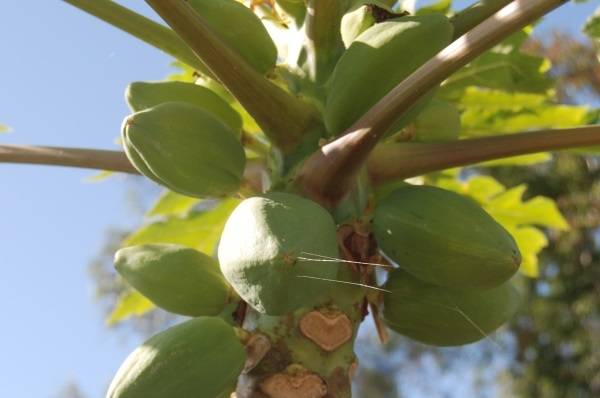 PAPAYA Australia, the national body which encompasses both yellow and red-fleshed papaya varieties, is in for a bumper record crop of red papaya and yellow papaw this year.

PAPAYA Australia, the national body which encompasses both yellow and red-fleshed papaya varieties, is in for a bumper record crop of red papaya and yellow papaw this year.

The existing record of about 1.3 million cartons, set in 2010-2011, is expected to be shattered by this year's anticipated record production of the red and yellow-fleshed fruit.

Papaya Australia president Gerard Kath said that there are three reasons behind the exceptionally big yield this year.

He explained that there was a distinct lack of a damaging wet season this year, resulting in minimal tree losses and additionally, trees are in good health, thereby producing at their maximum yield.

"The third reason is because of the past five years, the economics of growing papaya has been good. This has meant that there has been an influx of new growers who have entered the industry in the past 12 months," Mr Kath said.

It is not difficult for new growers to get into papaya production, as there is not a huge capital expenditure; therefore, there are a lot of growers who are constantly entering and leaving the industry, depending on the economics of it.

Originally, the papaw industry started with the yellow-fleshed line of papaw being the staple variety.

The approximate current annual yellow production is 500-600,000 cartons, with the industry based on the yellow-fleshed variety until 15 to 20 years ago.

The Australian industry has now chosen to say that its industry is unique and as a result, refer to the product as yellow papaw (sometimes also spelt paw paw) and red papaya.

Introduced about 25 years ago, Hawaiian Solo Red was one of the first ever varieties of red papaya and is the most commonly grown variety in the world.

It has a much sweeter and better flavour than yellow papaw (flavour being what you taste, and sweetness being the sugar content of the fruit).

Of the world's papaya production about 70-80 per cent is Hawaiian Solo Red based.

Manu migrants to Australia are very familiar with the Hawaiian Solo Red, resulting in a strong consumer demand for it.

It is important to note that red-fleshed and yellow-fleshed varieties of papaw/papaya can be both round and pear shaped.

It is a popular fruit and therefore the biggest market by far is fresh consumption.

Most of the product is eaten as fresh fruit, being also ideal for inclusion in fruit salads, for use as a breakfast fruit and as one of the highlight ingredients in canapes. The fresh green fruit is used in Asian cookery to make salads.

However, the processing sections of this industry are also experiencing increasing demand for purees for tropical fruit juice tetra packs (ripe juice) and produce going into chutney (green fruit).

The seeds can also be used as a pepper substitute.

Ripe fruit is also supplied to pharmaceutical companies, with one well-known example being Lucas Papaw Ointment, which is produced in Brisbane.

Also of particular interest is the papain enzyme which is found in papaws/papaya.

Papain has documented pharmaceutical and health benefits, as well as being a possible cancer preventative and having treatment qualities.

The leaf is able to be brewed in a tea for cancer treatments and has been used to help treat cancers of the stomach and digestive tract.

Papaya is a tropical tree best suited to tropical conditions; however, the trees do not like too much wet or cyclones, as plantations are stressed too much.

Under good conditions, the coast (Daintree to Innisfail to Cardwell) has preferable growing conditions for nine to 10 months of the year.

Papaya likes a more constant environment with regards to rainfall and wind, and because it has these attributes, the Mareeba area offers a more controlled environment to work with.

The length of time from planting to production differs between the coast and the Atherton Tableland, with the coast being nine to 10 months and the tableland being 10 to 11 months.

This is the typical growing pattern for the tableland.

The tree is grown for one year and then the crop is harvested for the next two years.

As the tree gets taller its fruit quality and yield decreases, the economics of retaining the tree must be considered.

Papaws grow fast and die fast. By the third year only half of the plantation is left.

There are about 100 to 150 growers of papaw and papaya nationally. The industry produces about 50pc of yellow-fleshed fruit and 50pc of red-fleshed fruit.

About 95pc of the national crop comes from coastal regions (Cardwell, Mossman, Daintree, Babinda, Innisfail and Tully) and the tableland Mareeba.

Innisfail (on the coast) hit its peak in domination as a production area five to 15 years ago.

More than 60pc of production comes from the tableland and 40 to 45pc from the coast.

Production is increasing in the Mareeba area, with the industry having been established 25 to 30 years ago.

There are now about 15 growers in the Mareeba area.

Mr Kath's Lecker Farming produces about 7400 cartons/hectare over the life of the crop.

Year one is spent growing the crop, with year two achieving 4900 cartons/ha and year three, 2500 cartons/ha.

National Crop figures for yield vary from three to nine cartons per tree per year.

The main yellow papaw grown is the 1B Hybrid with Hybrid-13 being more coastal.

The bulk of production of red papaya is RB1 and RB2.

However, the biggest influencing factor on yield is the season and not the variety selected.

Prices have been buoyant on the back of two cyclones (Larry and Yasi) and prices have remained high.

Some yellow fruit is currently being sold for $8 to $10/carton, which is below the cost of production.

Mr Kath has been president of Papaya Australia since 2006. He is 45 years old and has been growing papaws since the age of 10 when he assisted on his parents' farm in Gympie. He came to the tableland from Gympie 17 years ago in 1995.

A second-generation farmer, he conducts his farming enterprise, Lecker Farming, which he started in 2002, on 280 hectares.

Of the total farm area, 35ha to 40ha is now under papaya.

When asked why he originally grew red papaya he said: "I went into reds as it's the area for growth in the industry".

He began growing red papaya about five years ago.

On his farm he currently produces about 70pc yellow papaw and 30pc red papaya.

"Every industry and every business goes through cycles - they go through buoyant periods and tough periods," he said.

He said he believed that even though prices were buoyant, his "gut feeling" was that the industry will be in for a tough period in the short-term.

The same thing happened in 1999 after Cyclone Rona and when tobacco was being phased out on the tableland.

There was a big influx of new growers resulting in overproduction and low prices.

"There is industry breeding work that is currently being done which will allow for the release of new varieties in the coming years," Mr Kath said.

"There is a great scope for expansion in the industry for growers who are committed to growing quality fruit if we do it right."