LAST week's release of the draft Murray Darling Plan has reignited a long-standing dream for many to transport significant amounts of water from northern Australia to the south. 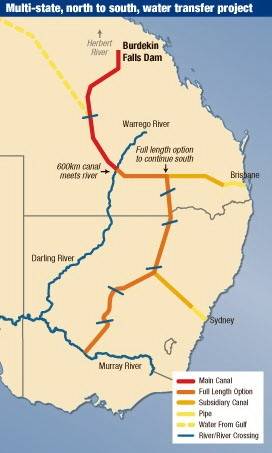 LAST week's release of the draft Murray Darling Plan has reignited a long-standing dream for many to transport significant amounts of water from northern Australia to the south.

T. Bowring & Associates chief executive officer Terry Bowring, New South Wales, says the Federal Government could spend $3.7b to install a 600-kilometre lined canal from north-east Queensland to the Warrego River and into the Darling River.

He says this would divert about one third of the 12,000 gigalitres of mean annual flows to the sea from the Burdekin and Herbert rivers, resulting in about 3500gL after evaporation for use in the MDB each year.

Acknowledging its expense - although his other option is a full-length canal system travelling 2000km to the River Murray - Mr Bowring claims it could be paid back in 20 years by selling the water.

He said city water users could be charged more than irrigators - "a common practice in America".

Mr Bowring also said pumping stations that would run at a yearly cost of $35 million for the 600km canal could benefit from advances in solar energy creation that would reduce costs into the future.

"To maximise opportunities to expand agriculture, we need to be looking at the potential to store and transfer large volumes of water from our northern high-rainfall areas to southern regions where a temperate climate suits a wider range of agriculture," he said.

Water Industry Alliance chief executive Andy Roberts says similar projects proposed in the past have usually been considered infeasible because of capital costs and the expenses involved in pumping large volumes of water from north to south.

"But that doesn't necessarily mean there never could be a project of this type," he said.

"Given the potential benefits that are suggested - environmental, social and economical - it may be worth this project being checked in greater detail to see if it meets the many other criteria that would be required by the very large amount of potential stakeholders."

University of Adelaide-Environment Institute professor Mike Young said he was familiar with this scheme and others like it, but such proposals had not stacked up under government assessments in the past.

"One needs to work out what is lost from the opportunity to use the water up north, and the impact that schemes like this have on marine ecosystems and fisheries," Prof Young said.

Land Access and Management Services operations director Peter Rayner says his own company's project could add an extra 4000gL of water to the basin each year through a 1800km pipeline from the Western Australia's north-west.

He said it would divert water from the Ord River and pipe it across to the Adelaide-Darwin rail line in the Northern Territory, following the line south before detouring south-east to the Murray Darling system.

"From a financial and engineering perspective, we believe it is both feasible and realistic - all it needs is agreement from the major interest groups to throw their collective support behind the proposal to take it to the next level," Mr Rayner said.

"It might well turn out to be a 'pipedream' - we don't believe so - but until it is thoroughly investigated and explored, no one can accurately say whether it is or isn't."

Mr Rayner is collaborating with SA independent MP Geoff Brock who is mustering support for the pipeline at a political level.