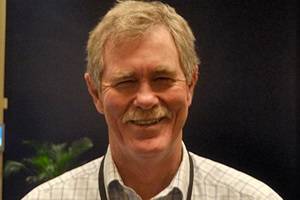 Mr Upton will stay connected with the cattle industry after retirement with his wife Chris running a seedstock herd and small commercial beef cattle herd on 730 hectares north of Armidale.

He spent the first 20 years of his career as a Livestock Officer with the NSW Department of Agriculture at various offices in NSW.

While with the Department he spent time on AACo’s Wrotham Park cattle stating near Chillagoe in North Queensland.

“I have worked within the industry and I very much enjoy interacting with breeders and producers.”

His final appointment with the Department was as Special Livestock Officer Beef Cattle Breeding.

Through the years Mr Upton was a private consultant to the beef industry in various roles in Armidale and lectured at the University of New England (UNE).

Mr Upton was a graduate from the University of New South Wales on a Department of Agriculture cadetship.

Since 1992 he has been an extension specialist and consultant at the Animal Genetics and Breeding Unit (AGBU), UNE, where he was responsible for extension of the use of AGBU products including BREEDPLAN and BreedObject.

Mr Upton was in charge of on-farm research projects responsible for introducing new technologies to the beef industry such as real time ultrasound for measurement of eye muscle area, fat and marbling.

He was responsible for the implementation of the breeding and measurement of progeny of some 350 sires across 30 herds from seven different breeds in southern and northern Australia.

“We have really improved data collection in BREEDPLAN with the design of commercial progeny test programs for individual herds and the Shorthorn Society through the Durham Research Project,” he said.

Mr Upton will be busy working on his farm but will keep a watchful eye for development at the Beef CRC.