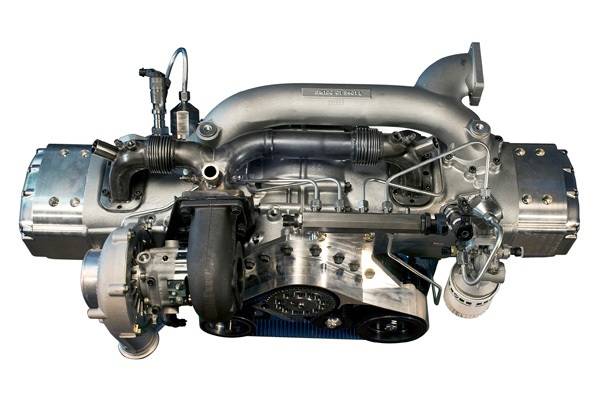 The "Commer knocker" engine is back, re-thought and upgraded with 21st Century technology, and ready to make finite reserves of fossil fuel go further.

The "Commer knocker" engine is back, re-thought and upgraded with 21st Century technology, and ready to make finite reserves of fossil fuel go further.

Although it has long passed on to curiousity value, the Commer TS3 engine which powered Commer trucks of the Fifties and Sixties with a distinctive knocking beat was once a familiar sound around saleyards and grain silos.

The configuration that gave the Commer its knock, involving two pistons running in opposition to each other in the same cylinder, has been re-invented for the 21st Century technology to produce an engine its inventors say can radically reduce fossil fuel consumption and running costs.

EcoMotors, a research and development company based in Michigan, US, claim that its Opposed-Piston Opposed-Cylinder (opoc) engine offers fuel efficiency 15-60 per cent better than conventional engines now on the market.

The opoc engine also produces just 30 per cent of the emissions of conventional engines, EcoMotors claims, and has half the moving parts, operates with 40 per cent less friction and is "fuel agnostic"—it can run on any liquid fuel.

Like the Commer TS3, the opoc uses two pistons in the same cylinder. In operation, the pistons travel from opposite ends of the cylinder to meet in the middle, where combustion takes place, forcing the pistons back towards the cylinder ends in a two-stroke cycle.

(High-speed two strokes are not noted for torque, but in response to an emailed question, an EcoMotors spokeman said that "the unique qualities of the opoc architecture and cycle are expected to result in an excellent torque profile and dyno testing to date are [sic] consistent with that".

The opoc's cylinders are arranged in the horizontally-opposed configuration used by Subaru and Porsche, driving through one crankshaft, so that a four-cylinder, eight-piston opoc unit looks superfically like the "boxer" engines of these manufacturers.

But instead of producing a single four-cylinder engine in which all cylinders fire all the time, EcoMotors splits its engines into two-cylinder modules, mated by an electronic clutch.

When the clutch is engaged between two modules, all four cylinders are driving the crankshaft. Disengaging the clutch allows one module to be switched off—for instance, in creeping city traffic—so that the vehicle is powered by only two thrifty cylinders while power requirements are low.

Demand more power, and the clutch re-connects the modules, with the power of the live module cranking the startup of the second.

EcoMotors has also re-thought the role of the turbocharger.

The opoc turbocharger is hooked up to an electric motor, which is used to force air into the cylinders from startup, preventing the "turbo lag" that affects exhaust-driven turbo systems.

When the engine is operating at enough RPM to drive the turbo with exhaust gas, the electric motor reverts to being a generator that produces electricity.

EcoMotors says that these concepts have been developed over eight years, and prototypes have done hundreds of hours of dyno time.

The big challenge is to get the engine off the dyno and into vehicles.

That's now looking a lot more likely, thanks to recent agreements that EcoMotors has signed with Navistar International and the Zhongding Holding Group, "both of which should result in market specific prototypes in the near future", the EcoMotors spokesman said.

"Development continues apace and opoc engines continue to build dynomometer time and improve on all aspects of the design. Commercial production could be up in 18 months but no manufacturer has committed to a production timeline as of today."

EcoMotors last year said it was working towards putting a 100 miles-per- gallon (2.8 litres per 100 km) passenger vehicle on the road in 2011.

This week, though, the company told Rural Press that "a prototype vehicle is not available at this time".