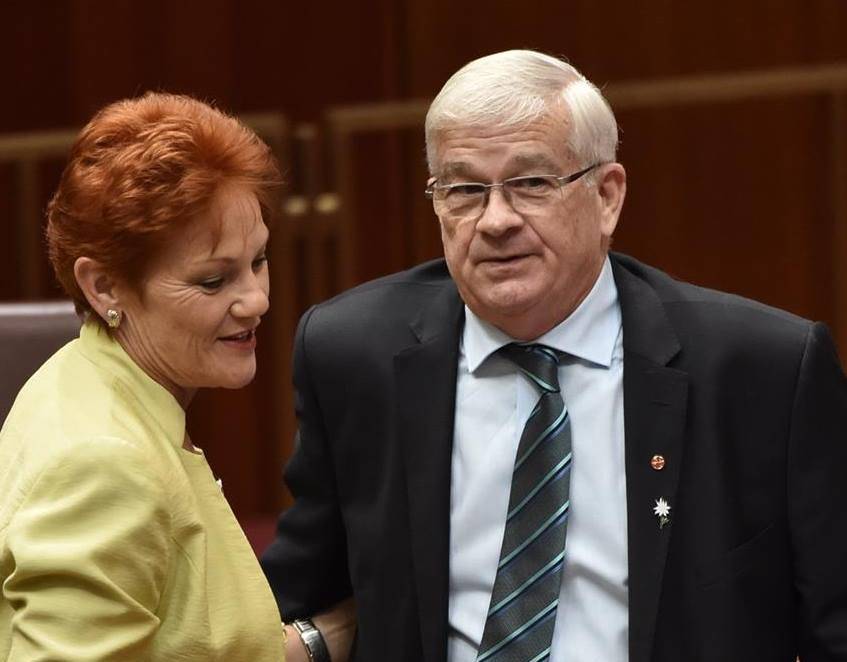 In a direct email reply to Mr Culleton, Mr Burston vented anger at the escalation of controversial events since the federal election, leading to his former colleague quitting the party and also being declared bankrupt before Christmas by the Federal Court.

That bankruptcy decision led Senate President Stephen Parry to provide official notification to the WA Governor General this week, of a vacancy in the state’s representation.

He’s also written to other members and Mr Culleton informing them he’d formally received notification from the court of Justice Barker’s sequestration order and that the former Williams farmer had also been recorded as an undischarged bankrupt on the National Personal Insolvency Index.

Senator Parry’s letter said Section 45 of the Constitution provided that a member or Senator’s place ‘thereupon’ becomes vacant if they’re subject to any of the disabilities mentioned in Section 44, which includes being an undischarged bankrupt.

“It is a necessary and automatic consequence of the declaration of bankruptcy of a serving Senator, that his place as a Senator becomes vacant,” he said.

But Mr Culleton also wrote to other Senators seeking support for his move to try and recall the Upper House to use its powers to try and fight the court’s judgment against him, which Senator Parry also rejected.

However, that email correspondence ignited a forthright response from the normally reserved Mr Burston.

“I do not agree with your continual criticism of our court system just because you are a continual loser in it,” he wrote back to Mr Culleton.

“Given that you will no longer be a Senator from Friday and therefore of little relevance I will give this email very little consideration.

“You have unfortunately (learned) the hard way that it is not all about you but about those you represent which is the ultimate privilege.

“I will continue to be a servant of the people who elected, not me, but a One Nation Senator who will never desert the principles we stand for, unlike you.

Mr Burston confirmed the email exchange to Fairfax Agricultural Media and said he disagreed with Mr Culleton’s request to use the Senate’s powers to try and help fight his bankruptcy charge, given a separation of powers existed between the court and parliament which should be respected.

He said Senator Parry was on solid legal ground in writing the letter to confirm Mr Culleton’s official disqualification and also in refusing his former colleague’s request to recall parliament.

“Rodney thinks that as Senators we are Gods and we can do anything we like but that’s not the case,” he said.

Mr Burston said he and Mr Culleton initially “struck up a rapport” after last year’s federal election, where One Nation returned to national prominence by winning four Senators including founder and leader Pauline Hanson in Queensland.

But he said he had trouble dealing with Mr Culleton’s inconsistencies and inability to take sound political and personal advice.

“He’s a nice guy and I tried to give him advice but he’d just argue black was white,” he said.

Mr Burston said he wrote to Mr Culleton ahead of him appearing in the High Court before Christmas - to deal with a matter referred by the Senate regarding his eligibility for election - urging him to accept the government’s offer of legal representation but it was ignored.

“I’m glad to get rid of him – he’s been like a five year old run amok.

“I hope we can get some consistency with his replacement and make a fresh start with someone who brings a new perspective and pays their bills and doesn’t deny what is fact.”

The High Court matter dealing with Mr Culleton’s election eligibility stems from a larceny charge he was convicted on, in absence, by a NSW Court.

He was awaiting sentencing for that charge when he signed his candidate nomination form for One Nation earlier this year, which carried a penalty of up to 12-months jail.

It resulted from the alleged theft of a tow-truck key during an incident in 2014 over a vehicle repossession attempt at Guyra in NSW, connected to the ex-farmer’s horse feed business.

But the original conviction was annulled after last year’s federal poll and Mr Culleton then pleaded guilty to the charge in August and no conviction was recorded against him.

Mr Culleton is also facing court in WA over an alleged car theft linked to an incident on a Cuballing property in the WA Wheatbelt in March 2015, where bank appointed receivers had their vehicle surrounded by bales of hay and the tires were let down, during a thwarted foreclosure proceeding.

Last week, Mr Culleton was also involved in an altercation outside the Magistrates Court in WA, where he’d been dealing with Violence Restraining Oder matters involving him and his wife Ioanna, against former anti-banking crusaders and one-time associates, Frank Bertola and Bruce Bell.

The incident saw Mr Culleton fall over and taken to hospital assess injuries sustained during an attempt by former WA Liberal Upper House member Anthony Fel’s to serve documents relating to a creditors’ petition for about $4 million, pushed by Mr Bertola who was a long-time grain and sheep farmer at Bremer Bay.

Mr Culleton said his election wasn’t a “bad thing” because he provided real life experiences of, “showing the courts for what they are” especially in challenging the banks to stand up for farmers being pursued for unfair debts.

“Many people have been made bankrupt and even some of the best men in the country have been bankrupt,” he said.

Mr Culleton said the cost of ongoing litigation had been an issue for him but he’d tried to deal with his various legal matters individually, when they surfaced.

“I’ve had them snapping at me like bloody magpies out in an open field and some I’ve just had to let clip me and deal with it further down the track,” he said.

“I have to be able to put in a management plan so I (can) fight it, outside of a pub fight.

“You never win a pub fight - you’ve got too many coming at you - so I’ve got to use strategy and make sure that (I can) pacify, as I get the results, as I go through.”

Mr Culleton said being referred to the High Court without notice was a major set-back given he was also dealing with the bankruptcy matter pursued by his former farm-neighbour Dick Lester, to reclaim a $280,000 debt over a grain and property lease and potential sale deal, dating back to late 2009.

“I had everything set for Dick Lester (but) had to divert funds to deal with that (High Court matter) which was unexpected so you’ve got to give me credit where credit’s due,” he said.

“Anyone can walk through the front door of a pub and go to the bar and have a beer but if there’s a couple in there that might have had a little too much to drink and come over, well anyone can come and pick a fight with you.

“There are many reasons why they might pick a fight but at the moment I’m a public figure and people see that as a way of getting the attention.

“That’s just the way it is and I have to accept that but so long as I’m true to myself and my family, I soldier on because I have to do the right thing, despite how ugly it gets.”

Mr Culleton quit One Nation to become an independent before Christmas after falling out with Senator Hanson but claimed his actual election wasn’t entirely due to the party’s strong brand but a “double edged sword”.

“There are people who would never have voted for One Nation if I didn’t run,” he said.

“I don’t reckon One Nation would be in parliament without Rodney Culleton.

“The whole thing was a joint effort and we certainly ran home strong in the country areas, where it clearly shows we have more support for country people and farmers.”

Mr Culleton said he didn’t want to waste his time serving on parliamentary committees “that are just going to get churned up in political nonsense”.

He said he was elected to “deal with the real issues” including pushing a Royal Commission into banking to investigate the ANZ Bank’s sale of the Landmark loans book - which he blames for the loss of his farm at Williams and setbacks to his various business ventures - while pushing issues related to the courts and legal system and a bigger slice of the GST pie for WA.

“If I go for the head of the snake and fix up the main issues then all else becomes a beneficiary,” he said.

“Going for the head of the snake - that’s what I’ve done - and that’s why I’m copping a flogging but I’m prepared to get in there and aim high.”

One Nation is currently hoping the High Court’s ultimate ruling will allow them to fill Mr Culleton’s vacancy with an appointment, rather than return to an election.