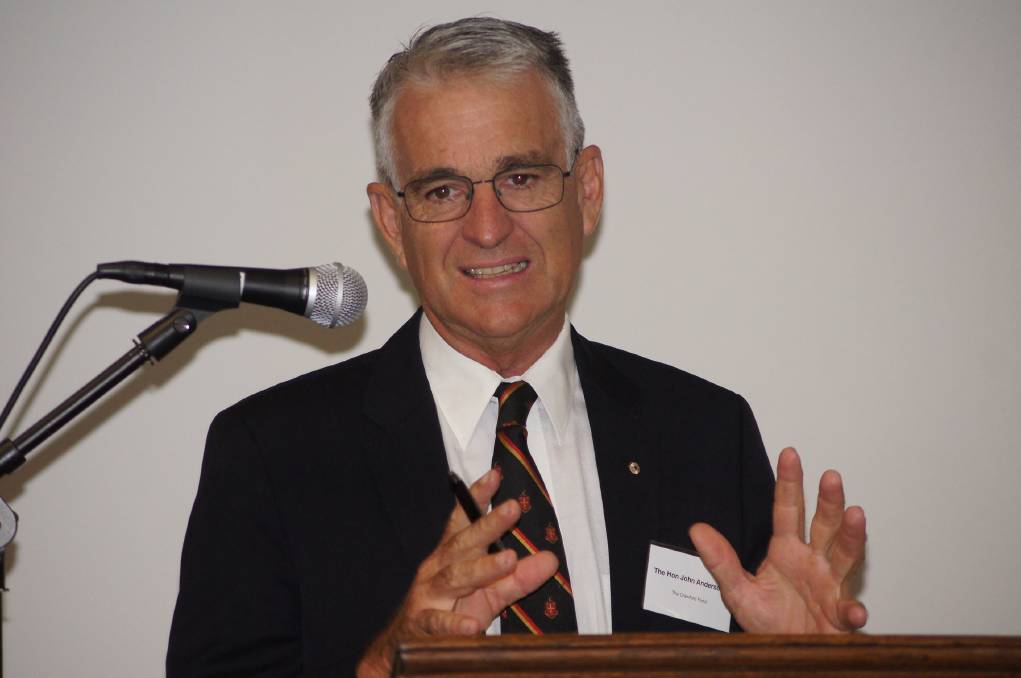 FAKE news is an ever-present danger for Australian agriculture that hinders access to scientifically approved Genetically Modified wheat varieties, while prompting emotive debates like the current one on energy affordability.

In an interview with Fairfax Agricultural Media, Mr Anderson - an inter-generational farmer from Gunnedah in NSW - also urged Australia’s farm industry leaders to engage politicians in response to the current political stoush on energy affordability and security, ignited by power blackouts in South Australia, given its significant threat to farm viability.

Mr Anderson is also co-patron of the Agricultural Biotechnology Council of Australia and said despite GM wheat varieties being foreshadowed for commercialisation in seven to 10 years, that time-frame was closing but progress had “stalled”, despite advanced science.

“But I believe we need to get it moving again - we really need to,” he said.

“There’s no suggestion of Frankenstein-foods here in Australia but we have drought resistant wheats for example, developed by the WA Department of Agriculture and Food that are being sat on, for ideological reasons, which to me makes no sense at all.”

Asked how it was possible to move forward with the development of GM wheat and what needed to change, Mr Anderson said that was “a deep philosophical question”.

“These sound like big words but it is true,” he said.

“Western Society needs to make up its mind whether it’s going to become irrational and abandon the age of reason, or whether we’re going to commit ourselves to calm, reasoned science.

“If we’re talking about fake news now, there’s plenty of fake news when it comes to the use of science in agriculture and indeed in energy policy.

“No sector of the Australian economy is more dependent on energy than agriculture but we are headed into the greatest mess on energy in this country that you could ever imagine and yet calmed reason is being swamped by emotion and hype.

“That’s not the Australian way.

“As an eminent Australian scientist commented in London the other day, which I read on the internet, we need to be careful that the age of reason, which has given us such tremendously prosperous societies, is not allowed to close-off.

“We’ve got to get away from this business of having two sets of facts, and choosing one that suits us, and start going for the real facts; whether it’s energy policy or biotechnology or the use of glyphosate, whatever it is.”

“I’d be one of those farmers who would say that banning glyphosate is based on emotion and it would be immensely damaging,” he said.

“I mean fancy environmentalists being in a position where they’re actually closing something down - for no sound reason at all - like the use of glyphosate, in a way that would result in an outcome I’d have thought was an anathema for greens.

“We’ll all have to go back to using a heap more fossil fuel, driving big heavy tractors around ploughing country up - but that’s not the sort of thing we want.

“We need to be cool-headed and respond to the science which is what the Crawford Fund is all about and what biotechnology is all about, and make calm, reasoned, rational decisions and not be so driven by emotions.”

Asked where US President Donald Trump fitted into the fake news, post-truth political equation and the potential impacts his administration could have on global agricultural trends, Mr Anderson said he was unsure what direction it would take.

“We don’t know how that administration’s going to unfold and I’m not sure that they really know - that’s the really frightening thing - but we do hope they find their feet quickly,” he said.

But he said the biggest immediate threat to global agriculture was that the Americans were “plainly now going to enjoy an era of cheap energy”.

“Now there is no bigger input cost, in its various parts, for Australian farmers than energy, whether it’s fuel, fertiliser, chemicals or diesel and transport,” he said.

“The reality is energy prices will be a killer in an era of low grain prices.

“If there’s one thing we need to do urgently, and I would encourage the National Farmers’ Federation and other groups to do it, is to really engage the government on energy policy.

“I’d be interested in their perspectives and they may see things that I don’t see, but I would have thought that this is a very important policy area for our farm groups to start focussing on, because the warning signs are all there.

“The huge furore we’ve seen in South Australia recently is just the tip of the iceberg.

“It’s very obvious energy policy and energy security is going to be huge in Australia because we’re importing it all.

“Not many people know this but during the recent Queensland floods it was a sensitive time for harvesting and so forth but the east coast of Australia got down to almost running out of diesel.

Mr Anderson said the US was about to enter an era of cheap energy due to its “extraordinary exposure” to unconventional gas supplies and oil production which also meant cheaper input costs for local farmers.

“For the first time since 1970 the US have an expanding energy and oil base and its cheap and it looks like it’s just going to get cheaper and in fact in a funny way Australia are great beneficiaries,” he said.

“If not for the shale gas revolution and condensate in America today, we would be paying a heck of a lot more for our fuel at the bowser; never mind on the farm.

“But in the mean-time we’ve got a very serious issue about access to primary source materials for inputs like fertiliser and chemicals and the irony is we are buying a lot of this stuff from our direct competitors.”