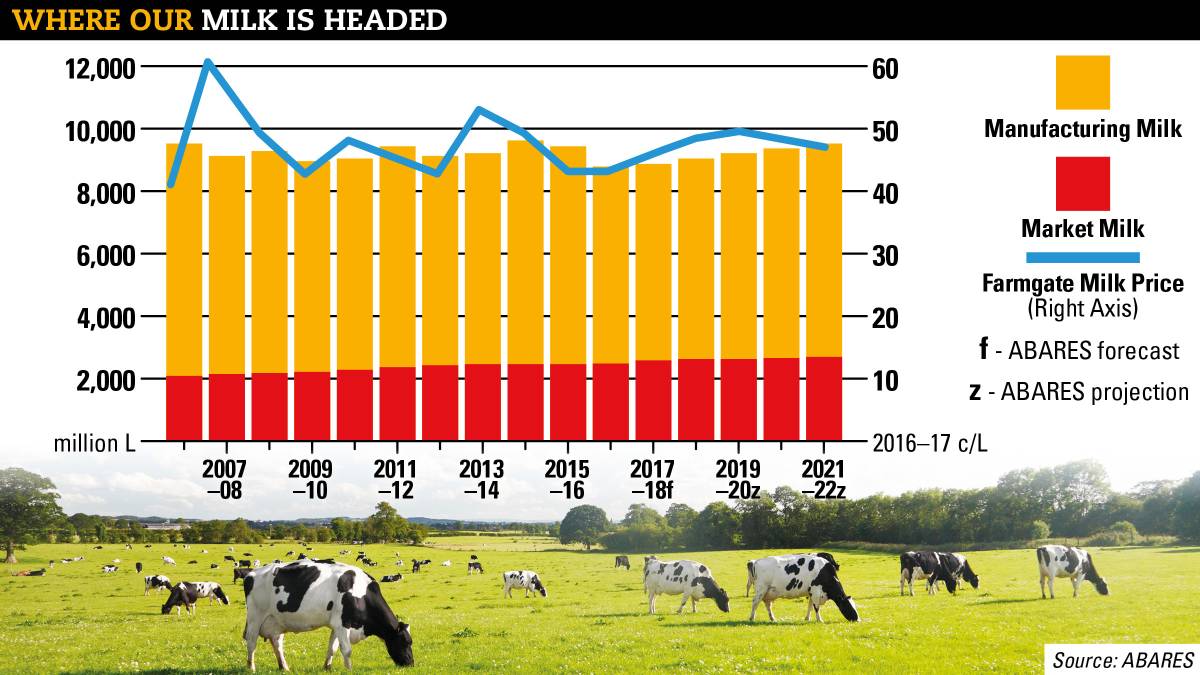 THE big declines in Australian milk production should turn the corner in the next financial year courtesy of improving farmgate milk prices, the trend towards low-cost grain and concentrate feeds and yield improvements.

Fodder to fuel milk price lifts for the next three seasons will come from the growing taste for dairy in Asia, the Middle East and North Africa, where both populations and incomes are on the rise.

Reduced turn-off in key dairy countries including New Zealand and the European Union and the re-opening of the Russian market will also contribute upward pressure on world dairy prices.

This is the outlook from Australia’s senior economists, whose dairy forecasts paint a much-welcome dab of optimism for the milk production game in Australia at long last.

In this financial year, world prices for cheese are forecast to lift by 14 per cent, for skim milk powder by 16pc, butter by 31pc and whole milk powder 37pc.

That trend will continue out to 2019-20 before global production catches up to cause a leveling effect.

The big mover and shaker is the Russian Federation, expected to resume importing dairy products from major exporters next year.

Before it implemented the trade embargo in 2014, Russia was the largest importer of cheese and butter.

ABARES says imports will not return immediately to those levels but Russia will certainly contribute to growing demand for global dairy.

Improvements in export returns should flow through to a lift in farmgate prices for Australian producers this financial year of around 2pc.

The good news is that is expected to continue to a 7pc rise in 2017-18, assuming a slight depreciation in the Australian dollar and the forecast higher world prices.

Reflecting those rises, our milk production, which has been in decline and will finish this season 7pc down, should start to lift.

ABARES experts have it at a 2pc recovery in 2017-18 to 9 billion litres and over the medium term rising consistently to 9.6b litres.