PRICE and seasonal momentum has propelled the Australian lamb and sheep industry into a sharp flock rebuilding phase.

PRICE and seasonal momentum has propelled the Australian lamb and sheep industry into a sharp flock rebuilding phase.

The flock recovery has been triggered by producers and processors who have reined-in turn-off and slaughter volumes of recent years, driven by unprecedented prices and excellent spring seasons in most areas of Australia which has caused low supply.

Yardings between July and December 2016 were 24 per cent lower year-on-year for sheep and 4pc lower for lambs.

The reduced slaughter and strong restocker demand stimulated a dramatic national flock rebuild this financial year, which Australian Bureau of Agriculture Resource Economics and Sciences (ABARES) expect will increase from 73.6 million head in 2016–17 to 83m head by 2021–22. 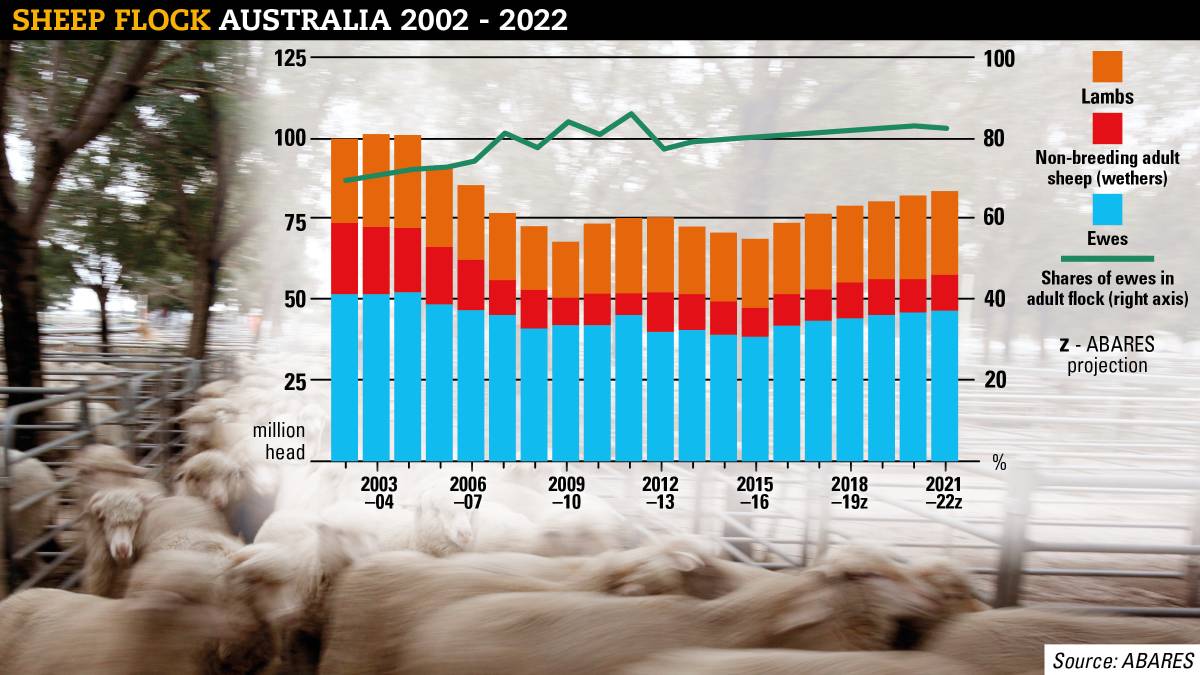 The national flock is forecast to increase by 7pc to about 73.6 million head by June 2017.

Restocker demand and strong exports will continue to fuel saleyard prices which are forecast to jump 3pc to average 600 cents a kilogram for lamb in 2017-18, following a 10pc increase this financial year.

Strong demand for breeding ewes to aid the flock rebuild is influencing a 20pc rise in value this financial year to 380c/kg, followed by a further 4pc rise to 395c/kg in 2017-18.

The retention of sheep for breeding will impact sheep slaughter and mutton availability, which are both expected to plummet by 20pc in 2016-17 to 6.5m head and 158,000 tonnes respectively.

The upside of recovering flock in the long term is growth in sheep slaughter to about 7.1m head, and mutton production is projected to increase to 171,000 tonnes.

However, prices are expected to react to the increase numbers and turn-off eventually, with sheep prices projected to decline gradually to 329c/kg in 2021–22.

Saleyard prices are also projected to decline in response to the increase in lamb supply, softening to 507c/kg in 2021–22, according to ABARES Outlook report released today.

While higher carcase weights have softened the blow of lower lamb slaughter, throughput is expected to drop 3.2pc in 2016-17 to 22.4m head and lamb production down 2.5pc to 503,000 tonnes.

Reflecting the expanding national, lamb slaughter and production is forecast to rebound 1pc to 22.6m and 507,000 tonnes respectively in 2021-22.

A slight recovery on the volume of lamb exports is expected in 2017–18, combined with a further 3pc rise in lamb export earnings.

The United States will remain the country’s largest single-country market for lamb, despite a 12pc tumble in lamb exports in the first half of 2016–17 as a result of weaker US economic growth and lower Australian supplies.

Economists’ eyes are on the burgeoning Middle East market which has been a major growth market for Australian sheep meat exports over the past decade in response to growing incomes, an expanding middle class and large expatriate populations.

Reflecting lower oil revenues in some Middle Eastern countries, combined with lower supplies of Australian lamb, exports are forecast to fall 2pc to 66,000 tonnes, before rising 5pc the following year.

While Australian exports to China face competition from local sheep meat supplies and New Zealand lamb, dry conditions in NZ is forecast to buoy lamb exports by a consecutive 3pc to 45,000 tonnes in 2017–18. T

While Australia’s main competitor, New Zealand, is the world’s largest exporter of sheep meat due to competitive import quotas and tariff deals, sheep meat production and exports have been in decline over the past decade.

Despite the projected decline in NZ exports to the European Union, Australian sheep meat producers will be unable to increase exports to the region given the EU quota limitations and large out-of-quota tariffs.

Live sheep exports have enjoyed moderate trade growth recently, a reaction of sheep availability, competition for sheep from the meat-processing sector will stymie live exports growth over the next two years.

Over the medium term, live sheep exports are projected to continue to increase slowly and reach 2.3m head in 2021–22 as the supply of live sheep available for export grows.​