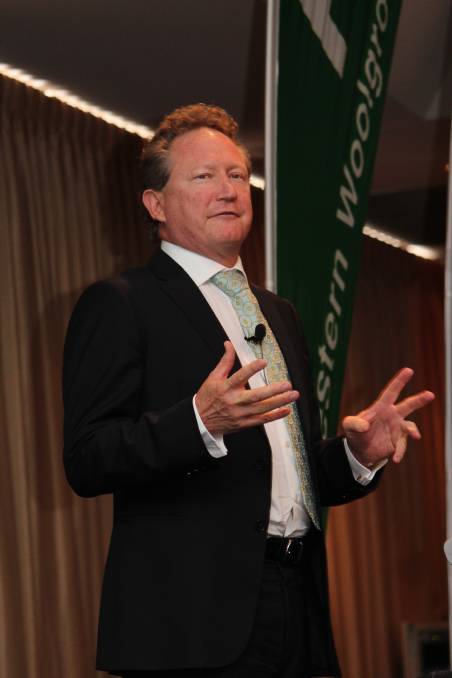 “I'm pleased to announce with the Premier that China agreed to expand opportunities for our meat exporters.

“Australia is the only country in the world with this market access.

“Australian chilled beef exports to China are already worth $400 million a year and more companies will also be eligible to export frozen beef.

“Total beef exports, overall, are worth around $1b dollars a year.

Mr Forrest was also in Canberra today where he was signing other high level agribusiness deals with China, driven through his role leading the ASA100 group that involves industry leaders from both countries.

the ASA100 aims to bring together expertise from both countries to improve branding and marketing of Australian farm produce to help turbo-charge economic gains achieved through tariff cuts delivered via the Australia-China Free Trade Agreement.

He said it would help drive significant growth for the Australian farming and Australian food processing sectors and help Australia to, “lift itself as a value adder of farming products which are exceptional”.

“We’ve worked very hard at ASA100 to have all of Australian beef to be accepted into China and remove the non-tariff barrier of frozen only which was harming Australia.”

Mr Forrest conceded Australia had exported chilled beef to China prior to the announcement but only on a “very small basis, with a very select few”.

“And sometimes people questioned why them and not everyone else; is their factional plays or favours done?” he said.

Mr Forrest said after today’s announcement he trusted the Australian government would “move quickly to meet our side of the bargain” which was to encourage beef exporters to meet the standards required locally, “and I think we certainly will”.

The Minderoo chair said his subsidiary company, Harvey Beef, was one of Australia’s oldest and largest beef processors and would “immediately step up to the plate” to move forward with the new beef arrangements into China.

“And I’ll be encouraging all Australian beef producers to do the same thing,” he said.

“Now that we can export chilled beef to China, it means Australia can really compete as a food supplier, as opposed to just a live animal supplier.”

“With the China-Australia free trade agreement we've further increased those economic opportunities and we are already seeing excellent uptake with more than 85 per cent of eligible goods accessing lower tariffs in both directions,” he said.

“We can see the results for our farmers, small businesses and industries.

“In 2016 wine exports to China were up 38pc to $470 million - fresh oranges up 46pc, and Chinese imports of Australian lobster quadrupled.

“China's transition to an economy that is more led by consumers, consumption, is an enormous opportunity for Australian exporters, for Australian businesses, in every field.”

Mr Forrest said Minderoo had also made a commitment to work with JD.com to enhance food distribution with the Chinese partner guaranteeing to source and supply Australian product to consumers which provided a “real competitive advantage in China”.

“We don’t want our products getting ripped off by cheap look-a-likes,” Mr Forrest said adding an agreement had also been signed on a $500m food fund during this week’s trade talks.

He said the deal with the Minderoo Food Group and JD.com would “really accelerate the effectiveness of e-marketing and e-commerce of Australian agricultural produce into China, to put Australia on the leading edge of that commercial battlefield which obviously involves the rest of the global food world”.

“It will really help put Australia at the forefront and that’s what I’m aiming for, for every single Australian farmer,” he said.

“To make Australian farm exports more efficient into Chin and to keep a sustained demand and therefore market for all Australian agricultural produce.

“The very reason why I started the ASA100 was to bring a cohesive vision to the Australian faring industry, to stop the huge loss of our youth and our daughters and sons leaving the sector because it’s just seen as an old world, an old technology sector.

“But we need to turn that sentiment around and say it’s not old world it’s very much new world and the future of our country and every daughter or son of a farming family should look at this industry with confidence, as a future career.”