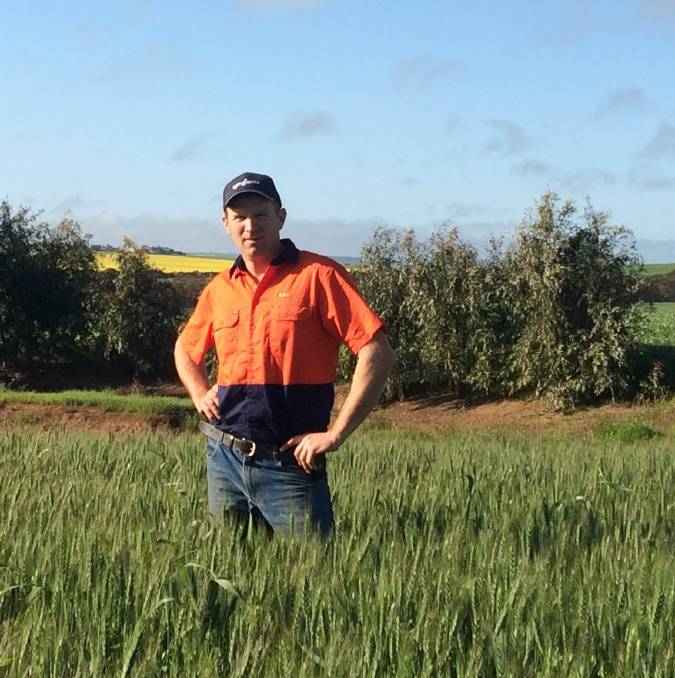 Eyre Peninsula farmer Randall Wilksch is committed to sustainability and improving soil health on his land.

FARMERS often say their motivation is to leave the land in better condition than they found it.

Randall Wilksch, who is involved in the business together with his parents Max and Julie and brother Jordy, said a key element of the business is a commitment to improving soil condition across the farm, spread across multiple blocks in varying rainfall zones and soil types.

“As part of our drive to leave the land in a better place we place a lot of emphasis on soil monitoring,” he said.

“We have done extensive mapping across our properties, including EM 38, gamma radiometric and yield mapping images.

“The aim is to try and pick up the poorer soil types and from there try to come up with a strategy to improve them.”

Mr Wilksch said techniques included clay spreading and delving on the family’s sandier country had been used since the 1990s, but added delving had a role to play on other soil types.

“We’ve got areas of buckshot gravel and light loam over clay at one of our blocks and we’re finding basically the same system as clay delving on sandy ground is proving effective with just some minor tweaking.”

“Delving with a gravelly top soil just requires you to bring up a bit less clay than you do on sand.” 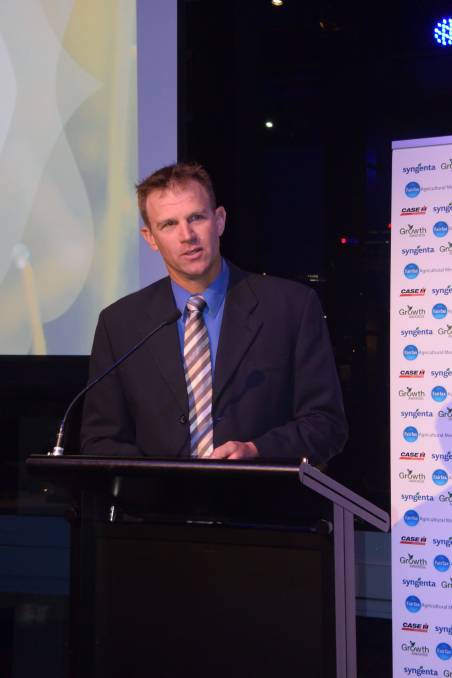 It is this commitment to improving the farm that saw Randall take out one of Syngenta’s prized Growth Awards last year in the sustainability category.

The 2016 Growth Awards winners will this month head off to Europe where they will visit leading research facilities in England, along with a trip to the United Kingdom’s major arable field day.

Back at home, Wilksch Ag’s two blocks are situated at Yeelanna, north of Cummins and Karkoo, around 20 kilometres further north.

It is not a large distance to travel, but Mr Wilksch said there were big differences operationally, which the team, including employees Matt Haylock and Fred Gerver, had learnt to respect.

“The rainfall is 420mm at Yeelanna and 370mm at Karkoo and the soil type is also markedly different.”

“At Yeelanna we have red-brown loam and some buckshot gravel over clay, while it is a lot sandier at Karkoo, with some of the ground non-wetting sands.”

Yield-wise, the business targets very different averages from each property.

“At the southern block, we’d like to average four tonnes to the hectare, but at Karkoo we target a little less than 3t/ha.”

The business produces wheat, canola and pulse crops, along with a smaller amount of barley.

“My father Max was one of the first farmers to bring pulses to the Eyre Peninsula in the 1970s growing lupins and field peas, so we have a long history with them,” Mr Wilksch said.

Today, he said lentils were the major pulse crop.

“Lentils, together with wheat, have tended to be our best performing crop in terms of gross margins in recent years.”

He said the changing landscape in terms of pricing and herbicide meant the dynamics had altered in a traditional wheat producing area.

“In the old days, pulses used to be grown primarily as a break crop, a chance to clean up ryegrass with an application of clethodim (herbicide).”

“Now you can go out with products like Boxer Gold and get really good weed control in your cereals.”

“Combined with the pricing structure at present, it has changed the way we look at our crops, although wheat is still a strong performer when we get a season like last year with good spring rainfall.”

Along with pioneering pulse crops in their areas, the Wilkschs were also early adopters of continuous cropping.

Mr Wilksch said the system had remained profitable, but said constant work was required to keep the ball rolling.

“We’ve had to work hard to not lose productivity, not to let the system run the soil down.”

“We’ve had to work hard to not lose productivity, not to let the system run the soil down.” - Randall Wilksch

He said the family was comfortable managing herbicide resistance, but said maintaining fertility was a challenge.

“We do a lot of fertility mapping and we always variable rate our phosphorus at a rate above replacement.

“In terms of nitrogen, around 50kg/ha of urea goes on upfront on average in the cereals and there is then scope for in-season applications.”

While top-dressing provides some flexibility, he said spending decisions were still made before crop yield was locked in.

“I’m not a big believer in long-term forecasts and we are still in a position where we’ve taken our position in terms of nitrogen application in July/August,  well before we have any certainty on yield.”

To manage risk he said the farm utilised an extensive network of soil moisture probes.

“The probes show us what we have underneath it, we combine that with historical data and gut feel about what the season holds to make our fertiliser decisions.”

In contrast, he said herbicide management, whilst challenging, could be managed.

“We first recorded herbicide resistance back in 1985, it’s something we have dealt with for a long time.

“To manage it appropriately, we’ve been diligent in rotating herbicides and we’ve also gone back into burning – doing narrow windrow burning over the last few years.

“We seem to have cut weed seed numbers down as a result.”

He said a multi-pronged spraying attack was required to stop weed seed set.

“We try to get a spray in at both ends of the season, whether that be a crop-topping in canola or whatever, and we also like to use a double knock strategy at sowing time, which is a good way of keeping resistance in check.”

“We have issues with ryegrass, but we feel we can manage it, based on what we have seen elsewhere radish is a bigger problem.”

But the Wilksch Ag team has a novel, if onerous solution.

“Each year for the last few years all of us on the farm had spent time hand roguing wild radish from problem patches.

“Just around flowering, when it is easy to spot, everyone working on the farm spends a couple of hours a day pulling up radish.”

It may be laborious, but Mr Wilksch said at this stage it appeared the drastic solution had helped.

“At this stage we seem to be staying on top of it, and we’ve worked out the cost at $5.60 a hectare, so it is cost effective compared to herbicide.”

In terms of sowing, Mr Wilksch said the family was happy to plant dry.

“We think getting the crop up and about is the critical thing in our environment.

“Weed management is important, but we feel getting a strong and competitive crop up early can play a big role in terms of crop plants outcompeting weeds.”

The cropping system has been no-till for a long time, with a recent focus on controlled traffic on three metre centres.

“We’ve stuck with a tined machine because of its flexibility, we did research into disc seeders, but you lose the ability to use some herbicides, especially cost effective options such as trifluralin.

“Along with that, we don’t believe we you would be able to plant some of our country with a disc seeder.”

Spraying is done with a Case IH Patriot.

“We’ve been very pleased with the Aim Command technology on the Case sprayer,” Mr Wilksch said.

Spreading, a critical component of the farm business, is done using a Bredel spreader, capable of handling all major fertiliser groups.

“The spreader is also doing a great job.”

The total cropping program is over 3650ha.

The story Sustainability more than a buzzword for Syngenta Growth Award winner first appeared on The Land.