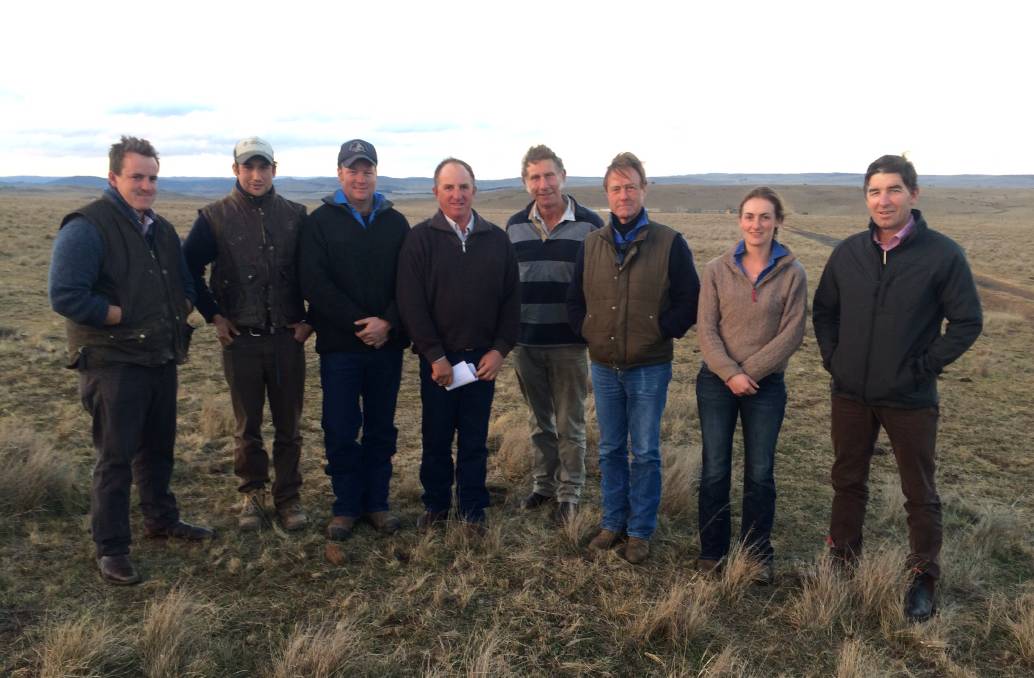 FARMERS in the NSW Monaro region have raised concerns about regulatory over-reach on native vegetation management.

FARMERS in the NSW Monaro region have had their concerns momentarily eased and a potential revolt averted, over a red and green-tape double-whammy restricting their land management options.

Monaro graziers Richard Taylor and Mike Green spoke to Fairfax Agricultural Media after a meeting was held with other farmers from the Monaro region on Tuesday night to address their concerns about the escalating regulatory regime.

Mr Green has represented NSWFarmers during ongoing and delicate negotiations with the NSW government in recent years ahead of the upcoming repeal of the state’s Native Vegetation on August 25 to be replaced by a new Biodiversity Act.

Mr Taylor is the biggest landholder in the region and has also been at the centre of the creeping regulatory imposition and prepared to raise a political fight if the new laws turned draconian.

But Mr Taylor said the meeting on a farm near Cooma resolved six core outcomes that the local farmers would now continue pushing for, to protect their property rights in the face of potentially perverse environmental outcomes inherent in new or changed regulations.

Ahead of the meeting, they sought clarifications from NSW Primary Industries and Regional Water Minister Niall Blair’s office on the devil in the detail of how native grasslands would be mapped and managed, in the new Biodiversity Act.

Mr Taylor said after assessing the information provided by Mr Blair’s office on how that mapping would work, in conjunction with inspections by the NSW Office of Environment and Heritage (OEH), the mood of landholders at the meeting, who operate farms in the grasslands dominated region, had calmed somewhat.

“We’re very frustrated – but that’s tempered by the fact we’ve made good progress in the last week, modifying the code, but clearly it’s a huge over reach in red tape,” he said.

“In the situation as it stood two days ago, for 80 per cent of the Monaro, we could not spray out a paddock - which is a very routine farming practice - without government authorisation.

“We’d have to get a government officer to come in here and certify if we could do that and that’s on 80pc of our country - not 20pc or 30pc.

“That’s the great majority of our landholding so if that’s not over regulation, I don’t know what is.”

Mr Blair has said the NSW government is aware of farmers’ concerns with the accuracy of the proposed regulatory maps and has committed to delaying their activation until they had broader stakeholder support.

Mr Taylor said the minister’s office had confirmed in the past few days that the mapping wouldn’t be implemented until at least the second quarter of 2018 and “then only until landholders are confident that the maps are accurate”.

But he said top of the list of the farmer’s six demands was to see “strict criteria” in terms of what would activate the mapping and how accuracy was defined.

“In our view the mapping’s not accurate until it can determine the botanical composition of the pastures,” he said.

Mr Taylor said second on the demand list was to define the legislation’s projected outcome and what the government was actually trying to achieve, in terms of the proportion of land managed on the Monaro for conservation, rather than agriculture use.

“Will agriculture become a second priority?” he said.

Mr Taylor said farmers in the region had also learned of the south-east grasslands being listed under the federal Environment Protection and Biodiversity Conservation Act (EPBC Act) in April last year “but there was zero awareness of it down here”.

“We know ignorance is no defence but I do feel they have a moral and ethical obligation to tell people when they enact a listing like that and people are potentially in breach,” he said.

Mr Green said the actuality of the “front line” in what farmers did on their land was not being reflected in the new state legislation.

“I’ve been seeing draft mapping for about two years now and it’s so inaccurate, there’s no way in the world, using its methodology, the mapping could ever reflect what’s actually happening out here,” he said.

“The perverse outcome from unrealistic legislation has certainly aided the spread of lovegrass there’s no two ways about that.

“And if we go into this mapping, which is so inaccurate, all of a sudden you have regulated land that’s infected with lovegrass and where to from here?

“The lovegrass will keep spreading.”

Mr Green said farmers were “ambushed” by the recent release of draft mapping as they understood the Monaro grasslands mapping would cease to exist and be built once a pilot program was put in place, to measure local factors like lovegrass.

“To have this blunt instrument of OEH dropping these maps on top of us was a total ambush,” he said.

“We’re a long way from re-establishing trust there’s no two ways about that.

“Certainly what we’ve received from Minister Blair’s office in the last couple of days is very reassuring but trust is something that’s out the window.”

Other core concerns listed by farmers

Mr Taylor said the group’s other concerns were; having a short, simple explanatory document for farmers on the process and impacts of regulating land given the complexity; information days to assist farmers who are short on details of the legislation that’s due to start in a month; clarity about the new regulation’s impacts our noxious weed control; and clarity on other technical aspects of the mapping.

But he said the “major gripe” with the proposed legislation was it being “mapping based” and that mapping was seeking to regulate 80pc of the Monaro, only to try and capture probably 20 to 30pc of native grasslands.

Mr Taylor said “blanket coverage” was being used because the mapping can’t determine botanical composition of the pastures and can’t be done with aerial imagery.

“If it can’t determine what’s native vegetation and what’s not it has to throw this blanket coverage across everything and regulate the whole area, to protect a smaller area,” he said.

“That’s why we have a real issue with the mapping but we’ve also got concerns that, even though they’re putting it off, it may only be a temporary situation.”

Mr Taylor said he couldn’t speak for everyone on the Monaro but certainly around the room at this week’s meeting, the feeling was people were “very comfortable” with about 20pc of their area being mapped for conservation.

“But in our view and in my view, the net outcome of the current legislation and mapping is that we’ll have to manage more than 50pc of the Monaro for conservation,” he said.

“When we’ve met with OEH and asked, ‘What do you think is a reasonable outcome, what are you trying to achieve?’ none of them will answer that.

“In my view, if our elected representatives can’t tell us what the expected outcome of the legislation is, they’re irresponsible in introducing that legislation.

“If our political representatives are bringing this Act in and can’t tell us what the expected outcome is, they’re being irresponsible.

“They can get it with our cooperation and with our trust – but if they want 50pc to 60pc we’ll fight.

“Having an end point of what you’d like to achieve seems to be a basic fundamental component of introducing legislation.”

Mr Taylor said he couldn’t find anyone within the NSW Local Land Services division who knew of the federal listing of the region under the EPBC Act and the federal government had made “zero effort” to get information out to farmers.

He said the listing’s definition of native versus non-native grasslands also excluded annuals.

“That was a major point for us in the state legislation but they’ve also done it with the EPBC Act,” he said.

“Also, with the federal legislation, the area they consider a breach is down to 0.1 of a hectare.

“The average paddock size down here is about 50 hectares and that’s the scale at which we manage land.

“But if we spray out a paddock and 0.1 of a hectare area within that was considered native vegetation, we’ve actually breached the Act, so in terms of doing an assessment, you’d have to be assessing the paddock on a 0.1 hectare scale which is completely unworkable.”

Mr Taylor said he found out about the listing under the Act when he sprayed some of his property at Delegate but a letter was sent by the federal government saying they believed the EPBC Act had been breached.

“We thought we’d done absolutely everything right but got a letter form the feds saying we’d breached an Act that we didn’t know existed.”

Mr Taylor said the level of regulation around local land management was a growing concern to farmers and potentially counterintuitive to environmental outcomes.

“I’m a fourth generation farmer and the fact we have very significant areas of native grass lands, probably more than anywhere else in the state, I would have thought was testament to the fact we’re looking after those areas and we’re quite prepared to look after those areas,” he said.

“In a sense all this regulation limits our ability to look after those native grass lands.

“At the end of the day they’re making having these native pastures a huge liability.

“A farmer with no native pastures can do whatever they like on their farm – but if they deem that you have areas of native pastures, they start to restrict your activities, so they’re setting them up as being a liability, which isn’t going to lead to good outcomes in the long term.”

Mr Green said lack of communication in the negotiating process around the developing legislation in recent times had also been frustrating, with NSWFarmers required to sign a deed of confidentiality to be at the table and therefore unable to disseminate information to members effectively.

“You can appreciate the need for confidentiality and those sorts of things but the information going out to the general public, hasn’t been happening,” he said.

“I’m battle scarred and I’m weary after two years of negotiations and at this late stage, it should not have had to be this way.

“All farms in NSW have a draft map but how much is regulated, we don’t know, and can’t answer that question.”

Mr Green said his understanding of the EPBC Act was that the only time federal laws were supposed to come into play was in the absence of a state’s native vegetation plan.