THE environmental dynamic duo; Mark Wootton and wife Eve Kantor are designing their farm system with an eye on 2030 climate projections.

This means their Western Victorian property, located 15 kilometres north of Hamilton will most likely be increasingly hotter compared with the cropping regions of Horsham and Balmoral area.

The springs will be shorter, winters warmer and autumn breaks less reliable.

Known as Jigsaw Farms, the 3378 hectares integrates forestry, carbon and indigenous plantings with high-productivity grazing on a large scale.

The farms, made up of six properties, intertwine farm productivity with climate change adaptation strategies. “The climate is changing, and humans are the main cause,” Mr Wootton said.

“In our area, by 2030 we are going to have increased CO2 (carbon dioxide) that will increase our plant growth, which is good stuff, but the bad news is that, in all likelihood, it will be moisture limited.

“There will be an increase in the frequency of hot days, a warmer winter but shorter growing periods, and variable rainfall.

“We need to plan for a future climate that will be more variable and extreme, which is one of the hardest things we are dealing with at the moment.”

Mr Wootton is a geographer by training and a farmer by practice. He was the founder and former chairman of the recently-defunct Climate Institute.

He is also a former chairman of the Glenelg Hopkins Catchment Management Authority and has sat on various state government boards dealing with climate change adaptation.

The Woottons walk the talk with their highly productive stock and agroforestry operation, achieving carbon neutrality in 2010.

In the past twenty years, the family have planted more than one million trees across their farms, mostly from seed, costing more than $1 million.

About 320ha has been planted out to hardwood timbers in wide shelter belts along the edges of paddocks.

Mr Wootton said the biodiversity and agroforestry plantations act as a carbon sink, absorbing about 18 per cent of the properties into treed or wetlands.

In 1996 when the family started purchasing the various farms, they were covered by only two per cent revegetation. Eve Kantor and Mark Wootton with one of the ancient Red Gums on their property Jigsaw Farms. Mark and Eve have re vegetated their properties to bring back wildlife and increase farm productivity. Photo by John Woudstra.

“From a grazing point of view, if you improve fecundity levels to increase lamb numbers on the ground per breeding unit, you will be more profitable, your methane impact will be lower and it will cost less to run that animal because it will be a better converter of the feed it consumes,” he said.

Pasture and water are the two key ingredients that underpin the operation’s ability to support a high stocking rate.

“We are in the business of growing grass and managing it well,” Mr Wootton said.

“We run a high input grazing system, in which summer and winter active cultivars of phalaris, fescue and clover-mix perennial pastures, along with effective water systems, are the life blood of the farms.

“Traditional annual grasses are on the way out, in favour of perennial pastures and lucerne, reducing the need to buy in supplementary feed.” 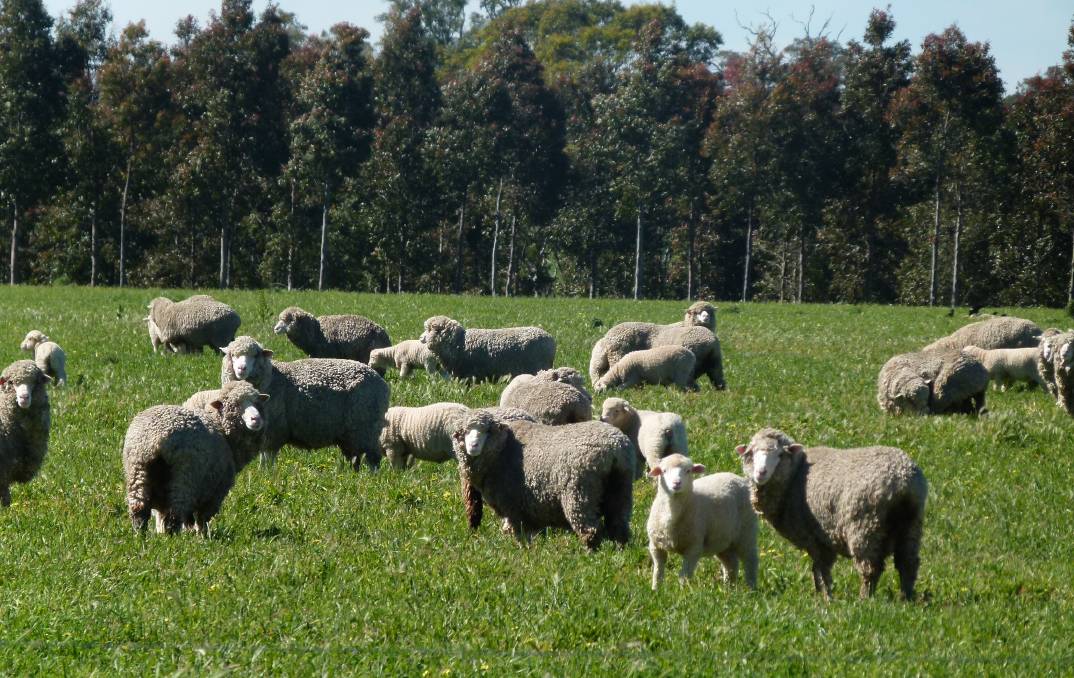 Last year the Woottons sold one-third of their land following a surprising, and tempting offer.

The move forced an overhaul of their livestock operation, leading to the dispersal of Jigsaw Farms’ cattle herd.

“I was attached most to my cattle and least to my Merinos, but the sheep came out on top of our consultant’s gross margin analysis,” he said.

“Those with good reproductive figures at 100pc, with good growth, good muscle and genetic fat came through as the most profitable system by more than $15/DSE.

“We took the emotion out of it and based on figures quit the whole herd: 1200 breeders and followers all went in one hit.”

With a focus now on Merinos, Mr Wootton aims to breed dual purpose “super ewes”, that are flexible and resilient to the climate.

“We are constantly looking for ideas which lower our methane output from our stock, such as increasing growth and reproductive levels,” he said. The fine Merino wool flock average 18.2 micron and 5.4 kilogram per head wool cut, with 40pc of lambs born joined to either Poll Dorsets or White Suffolks for their prime lamb operation.

The wether portion is either held for wool production or increasingly targeted toward the Middle Eastern and North American export markets.

“To take wool out of our system we would need to move our lambing percentages with ewes joined to lambs on the ground to 170-180pc, instead of 100pc – that is sobering.”

Earlier this year, the University of Melbourne released a report observing the processes involved and benefits of Jigsaw Farms becoming carbon neutral in 2010.

The study showed that between 2000 and 2014, Jigsaw Farms reduced their emissions by 48pc.

"I reckon we can say livestock production can be part of the solution for lowering greenhouse footprints and is not necessarily the problem, which it's always seen to be," Mr Wootton said.

Earlier this year, the University of Melbourne released a report observing the processes involved and benefits of Jigsaw Farms becoming carbon neutral in 2010.

The study showed that between 2000 and 2014, Jigsaw Farms reduced their emissions by 48pc.

"I reckon we can say livestock production can be part of the solution for lowering greenhouse footprints and is not necessarily the problem, which it's always seen to be," Mr Wootton said.

Jigsaw Farms’ analysis revealed when 20pc of the farm enterprise was covered with trees, the majority of stocking rates were carbon positive over a 25 year period.