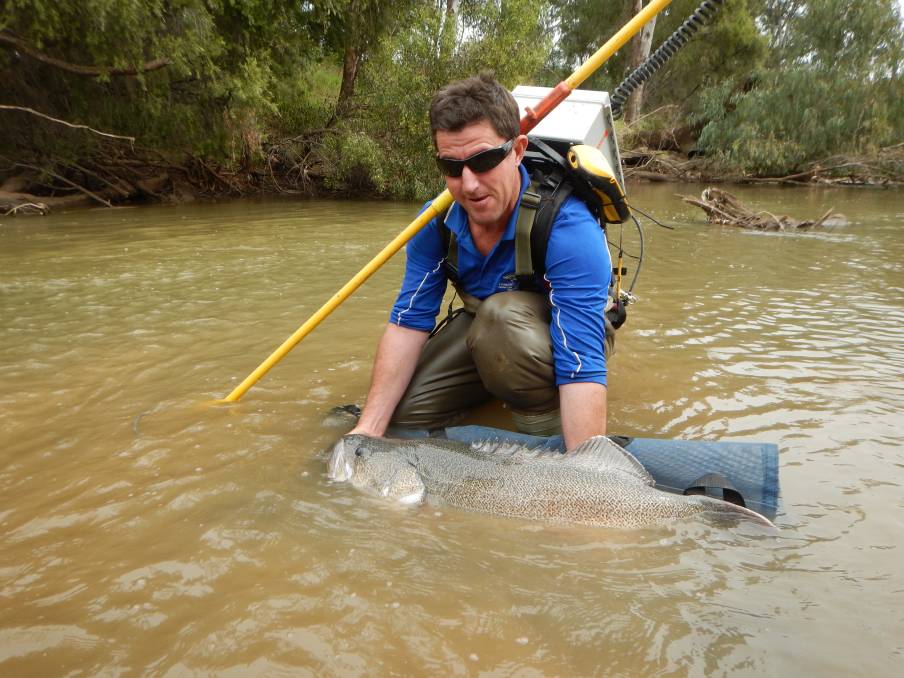 A Murray cod is tagged and monitored with the help of a backpack electrofisher in the Gwydir River. Photo: G.Butler.

IT is an immense challenge, but David Papps would not swap his job as Commonwealth Environmental Water Holder.

He is the irrigator responsible for watering environmental assets in one of the world’s biggest river systems, spanning more than one-sixth of Australia’s landmass.

Waves of controversy have tumbled over the Murray Darling Basin Plan, with allegations of upstream water theft and detrimental low-flow pumping regulations in the Barwon Darling river system. Academics in the Wentworth Group recently claimed the $13 billion reform is failing.

But Mr Papps is brimming with “genuine excitement” at the achievements of the Commonwealth Environmental Water Office (CEWO) he leads. +13
River recovery at work across the Basin

“I can reassure people, we are getting significant results at this early stage in the plan, and it’s an entirely reasonable assumption they’ll get better as we learn from what we’ve done so far.

Boil it down and Mr Papps holds a big bucket of water to tip down rivers, over wetlands and into marshes, giving flora and fauna a helping hand.

In the regulated Southern Basin Mr Papps deploys the entitlements he holds in dams, which are recovered, to coincide with high flows into wetlands or to prime a stretch with environmental flow.

In the unregulated Northern Basin Mr Papps’ holds entitlements which maintain healthy baseline flows. He can also enter the temporary market to prime a natural high-flow event for maximum benefit.

“We are trying to put back some of the flows that have been taken for agriculture, which I have no problem with, that is how the river’s managed. And some things do happen naturally, with big floods. But environment water allows us to achieve results that would otherwise not be possible,” Mr Papps said.

“Good science is telling us that we’re getting results, as is anecdotal evidence across the Basin.”

That should come as welcome news to irrigators who were left asking if the reform wrangle, and 2000 gigalitres of water recovery to date, had been worthwhile as the general public jumped to conclusions about irrigation industries. Karoola Reach in the Lower Darling. Monitoring of fish populations following environmental water delivery in May 2017.

“The idea that irrigators and towns are opposed to environment water is nonsense,” Mr Papps said.

His job is not without controversy. Concerns centre on flooding from high flows directed at South Australia, and the Basin Plan’s recovery of water to maintain a freshwater environment near the Murray mouth.

“We hear in local media across the Basin that the Plan is all about the Lower Lakes and the Coorong,” Mr Papps said.

“While it’s true that they’re important places and RAMSAR wetlands which we need to protect, the CEWO is about producing great results in local areas, and that point is often missed you just focus on what’s happening on the end of the system.”

Mr Papps has his eye on results up and down the rivers he helps to run.

“I’m focused on fish results in the Darling River and the Anabranch, pelicans in the Murrumbidgee or Macquarie Marshes and the health of South Australian riverland and floodplains.”

The CEWO is about producing great results in local areas, and that point is often missed you just focus on what’s happening on the end of the system - David Papps

The Basin Authority reports 2015-16 watering delivered widespread benefits to fish, birds and wetlands in the Goulburn, Gwydir, Lachlan and Murrumbidgee Rivers and the Edward-Wakool system.

Native fish in the Darling River and its anabranch in Far Western NSW benefited from environmental watering on the back of high flows that followed good rain.

“We used local knowledge from fishers and NSW government experts to put environmental water following floods to create opportunities for fish to move.”

Mr Papps said the Basin is alive with amateur fisherman and birdwatchers, who along with indigenous groups and others contribute a crucial granular understanding of the environment.

“(Environment watering) has given us great results for a fair few species of native fish, with successful spawning and movement throughout the system. In fact, we’ve confirmed Menindee Lakes and the Anabranch are powerhouses for growth and distribution. Fish from there have gone the length and breadth of the Barwon Darling system.”