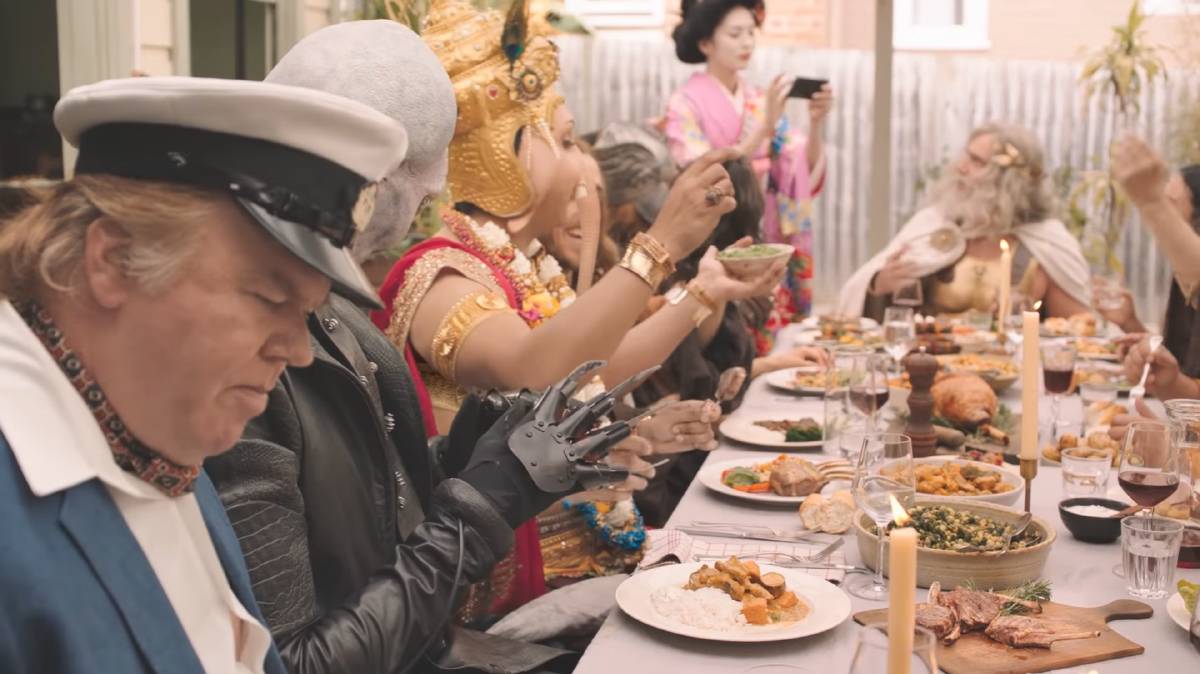 As reported in Fairfax Agricultural Media, US-based President of the Universal Society of Hinduism Rajan Zed said MLA’s new ‘You Never Lamb Alone’ video seemed to make fun of Lord Ganesha who was meant to be worshipped in temples or home shrines and not used in selling lamb meat for mercantile greed.

The Hindu leader demanded MLA remove the offensive advertising immediately for using Lord Ganesha’s image which is considered one of most worshiped gods in the Hindu religion; especially popular in India where Australia is trying to sign-off on a new free trade deal.

Lord Ganesha’s image appears alongside other leading religious icons like Jesus, Moses, Aphrodite and Zeus, chatting and eating lamb at a fictional BBQ in the advert.

“So shall we address the elephant in the room?” Buddha says in the video commercial.

But the controversy has escalated politically in recent days with the Indian government making a complaint about it, while the issue has also been referred to the Advertising Standards Bureau (ASB).

Religious leaders have also bended together in making threats to boycott lamb consumption globally, unless MLA pulls the advertising.

A spokesperson from the Department of Foreign Affairs and Trade said the Indian High Commission had raised its concerns with the Department about an advertisement produced by MLA.

“We understand the advertisement has been referred to the independent ASB for review,” the statement said.

“The guidelines administered by the ASB focus on maintaining community standards in advertising.

“The ASB manages the complaint resolution process for the advertising self-regulation system in Australia.”

It’s understood the ASB is due to meet tomorrow afternoon and MLA will hold off on making any further public statements, until after any decision is made.

After Christian-Hindu-Buddhist-Jewish leaders urged MLA to withdraw its advertising, saying it trivialised various religious figures, a spokesperson for the industry cattle-levy marketing and research agency said, like previous campaigns, this year’s Spring Lamb campaign sought to promote the value of unity and inclusivity.

“There was never an intention to offend, rather we wanted to ensure we were as inclusive as possible,” the spokesperson said.

“To this end, those religions that don’t typically eat red meat are not shown consuming lamb, but are still invited to the table.

“We understand MLA advertisements have a history of being irreverent and jovial, but as a responsible advertiser always with the intent of adhering to the Advertising Standards Code.”

In a statement, the Indian High Commission said the MLA advert was “offensive” and “hurt the religious sentiments of the Indian community”.

"The consulate general of India in Sydney has taken up the matter directly with MLA and urged them to withdraw the advertisement," the High Commission said.

“A number of community associations have also registered their protest with (the) government of Australia and MLA.”

President of the Council of Indian Australians, Mohit Kumar, told Fairfax Media the Indian government was reacting to the strong concerns of the Indian community.

“I can totally understand they didn't mean to offend,” he said.

I accept the premise of the ad was to show people of different beliefs can come together at the same table and have a meal - no issue with that concept at all.

“But the execution was very poor.

“It's not we don't have a sense of humour, we're all Australians at the end of the day.

“The issue is it's a matter of respect and this is a very disrespectful and insensitive depiction.”

Rajan Zed said the Indian High Commission had made a “demarche” to the Australian government about the lamb advert – a move which included DFAT, the Department of Communication and Arts and the Department of Agriculture.

He said it aimed to bring to their notice the “offensive” MLA advertisement that “hurt the religious sentiments of the Indian community”.

“Moreover MLA Board Chair Dr Michele Allan and Managing Director Richard Norton should resign for apparently working against the interests of the organisation by upsetting consumers instead of charming them,” he said.

“With strong condemnation of this insensitive ad world over, MLA appeared to be harming its ‘core focus’ of delivering ‘value’ to its 50,000 levy paying members by growing demand for red meat.”

He said with the sentiments of communities worldwide resulting in boycotts - and the advert continuing - how long could Australia keep its position, as one of the largest exporters of red meat in the world, with a $22.9 billion red meat industry.

“Australia exports red meat and livestock to more than 100 countries, representing over 60 per cent of the industry's production, making it critical to protect and expand our access to overseas markets, MLA claims,” he said.

“Hinduism is the oldest and third largest religion of the world with about 1.1 billion adherents and a rich philosophical thought and it should not be taken frivolously.

“Symbols of any faith, larger or smaller, should not be mishandled.

“Moreover, MLA should be mature enough to understand that love, and not lamb meat, united us and brought us together and hurtful ads like this were contrary to their claim of ‘advertising that works and boosts preference and demand for Australian Lamb’.”