When Trevor Terlich first attended the Henty Machinery Field Days he ended up bogged in a ploughing competition. 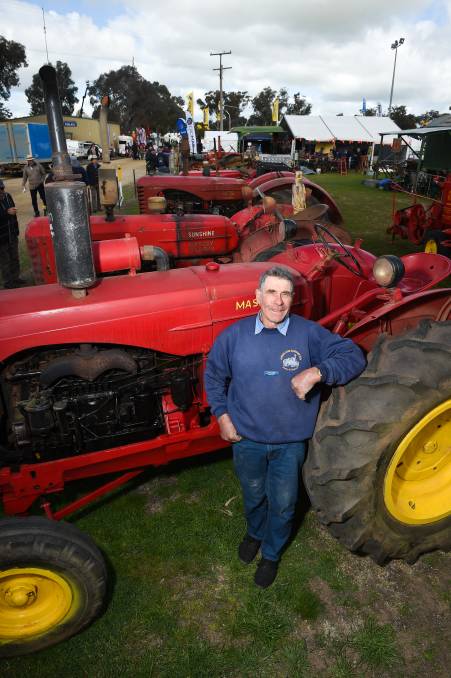 When Trevor Terlich first attended the Henty Machinery Field Days he ended up bogged in a ploughing competition, accidentally shooting planks of wood across a vacant field.

The Henty and District Antique Farm Machinery president came to inaugural event as a spritely 27-year-old.

In that first year, Mr Terlich, now 72, tried to unbog his tractor by placing wood under the wheels to create grip, but instead spectators soon had to duck as the wood went flying.

Ever since, the Pleasant Hills farmer has built on his fond memories of Henty Field Days.

Year-in, year-out for 40 years, Mr Terlich and his tractors have inspired the next generation of farmers

“It’s great, the young people love to get involved in something like this,” he said

“The Men’s Sheds have a motto to teach your grandson not his father, because the grandsons are the ones who are keen to take it on.”

He said despite the committee not being sure if there was an ongoing place for the antique display, they’ve become a stalwart of the show. “The public loved it and we run the whole way through,” he said.

“In the millennium drought they were pleading with us to have something to draw people in. It’s good for us too because it broadens your mind and you see new things.”

The club will celebrate its 40 years on Thursday at 10.30am.

Albury’s Peter Woods, 79, recently retired from life as a truck and farm machinery salesman, but with time to spare he couldn’t risk trading in the quiet life for another year at the Henty Field Days.

“I’m a fourth generation farmer – it’s in my blood,” he said. “It’s something that never leaves you. I wish I could do it all the time.”

Mr Woods has been to about 35 field day events and said the event had grown hugely but still retained its country spirit.

“It’s gotten bigger and bigger but otherwise it hasn’t changed a lot,” he said.

“Some field days become about lawn mowers and tools but this one hasn’t – it’s the biggest in Australia.”

When Kerry Pietsch was 17, he bought himself a piece of history – a 1917 Raupenstock.

“My dad used to go down to the Massey Ferguson dealer and it sat over the fence because it used to pump water on so I’d jump over and go sit on it and dad would have to come and collect me,” he said.

Now 72, Mr Pietsch said it was great to have the 100-year-old machine on display, and while it might take a couple of turn overs, the machine was still running.