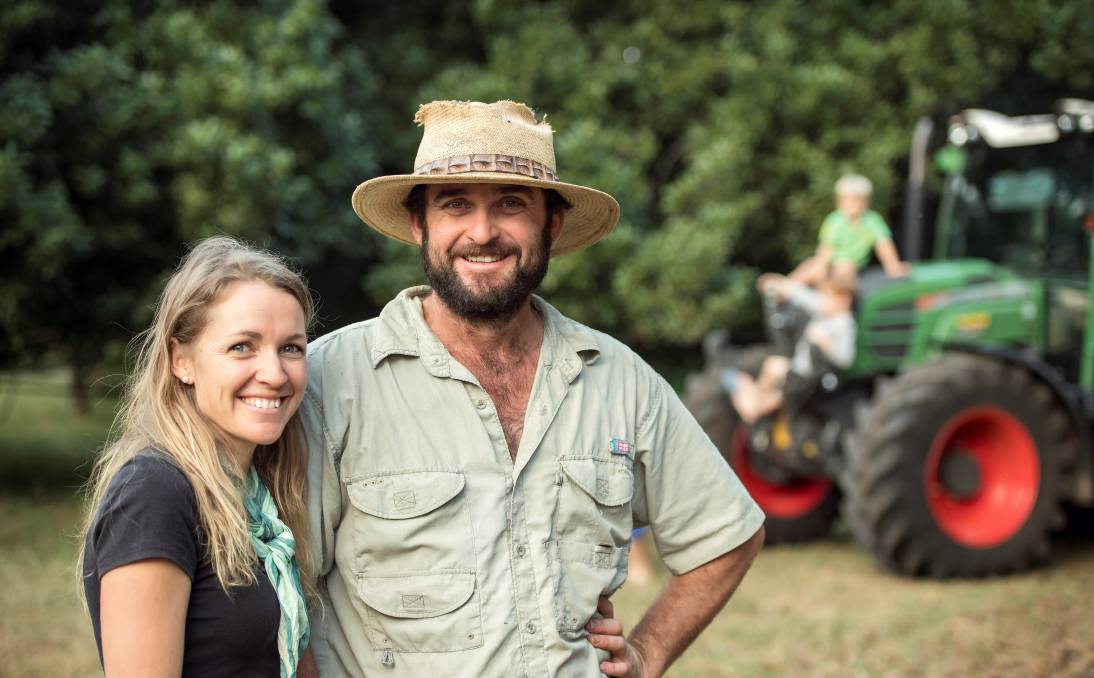 FROM value adding and branding, to fine tuning all aspects of production as they build efficiency and quality safeguards into their enterprise, young Queenslanders James and Aimee Thomas have blazed new trails since making the shift from cotton to macadamias five years ago.

Now they have come up with cutting edge technology aimed at protecting the critical under-tree nutrient up-take zone and building in further harvesting efficiencies.

It is a concept many in their industry say could well be common practice in a short time.

The couple, with their four young boys, have 45 hectares under 10,000 trees, aged 15 to 35 years, at “Falkirk Farm” and the adjacent “Wonga Park” in the Lower Wonga Valley north west of Gympie.

Their farms encompass 190ha all up and their plan is to plant more nut trees, along with growing manure and refuge crops such as sunflowers to attract cockatoos.

They left cotton growing at St George as part of family succession planning and were looking for another agricultural sector which would suit their skill set.

“My father was already growing macadamias on the Sunshine Coast,” Mrs Thomas said.

“We could see it was a product with enormous potential given the fast-growing world trend towards healthy, tasty, wholesome food.”

“It’s been a huge learning curve but a lot of what we knew from cotton growing has been transferrable, such as soil health, nutrition and irrigation.” 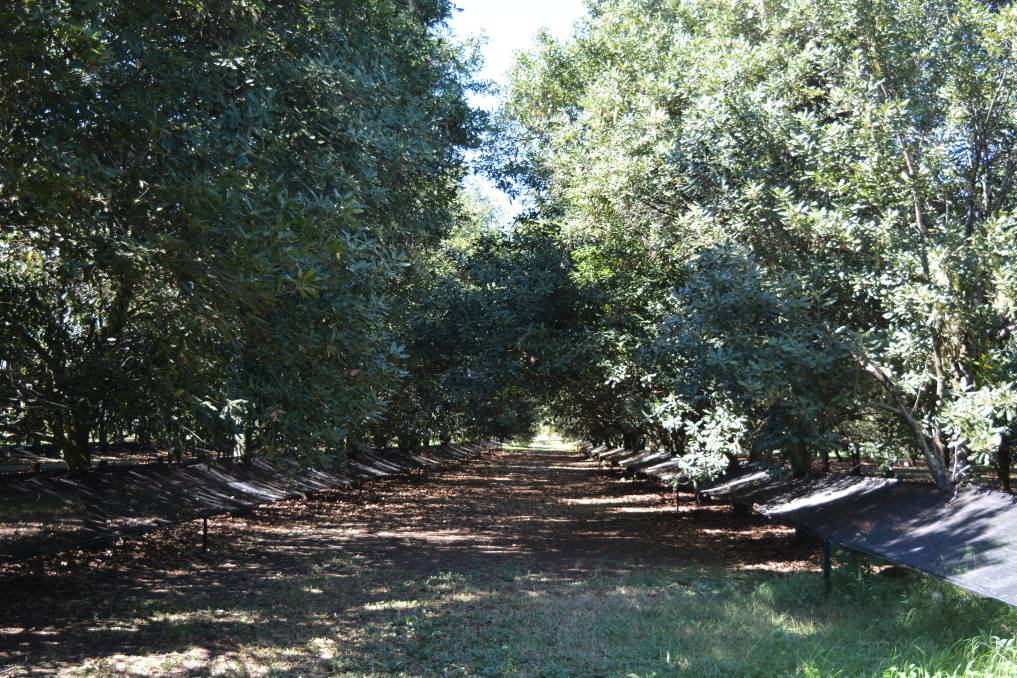 A tranquil setting inside the Falkirk Farm orchard.

All their existing above-ground irrigation infrastructure has since been replaced and independent consultants were employed to measure flows and evaluate the system in order to establish the best water use efficiencies.

The farm dam was also extended to further secure supply. The farms have a rate-of-take licence to irrigate from Widgee Creek.

“Each season has had different requirements but having irrigation at key stages of crop growth has been critical to consistent yields,” Mrs Thomas said.

Meanwhile, an integrated nutrition program was designed with the help of consultants that includes fertigation, foliar spraying and compost and granular applications.

Production on the farm has grown from 2.4 tonnes a hectare to 3.6t/ha, which now has the operation placed above the industry average.

Biological pest and disease management, involving the release of beneficial insects at key times and working to thresholds to ensure strategic spraying, is also a big part of their management.

Mrs Thomas described their approach to farming as “holistic”, which has led to production benefits and provides the foundation for an appealing paddock-to-plate story for underpinning a brand. 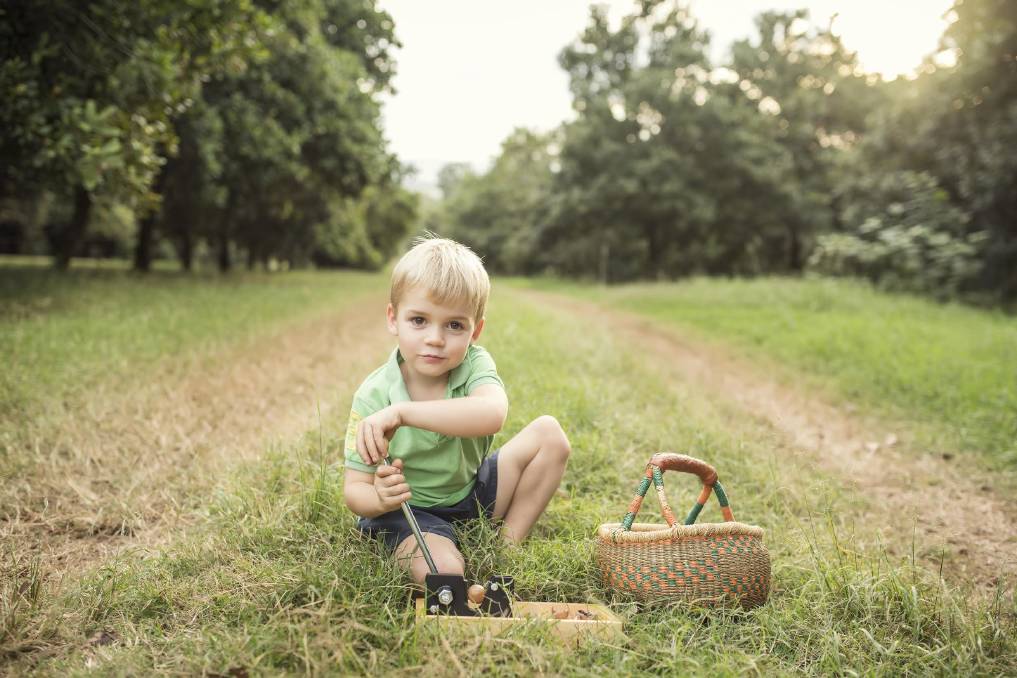 “We could see clear potential in the growing desire to source whole, farm fresh, nutritionally dense food that is produced in a sustainable way,” she said.

“Families really want to know more about where their food comes from, who grew it and how.

“We are well aware that access to good quality food in the bush is not always an easy thing and we believe it shouldn’t matter what your postcode is, you should be able to source good quality food.”

That way of thinking led to the launch in July of the label Macadamias@FalkirkFarm, which the Thomases describe as a “healthy, nutritious, easy, tasty crack-a-snack.” 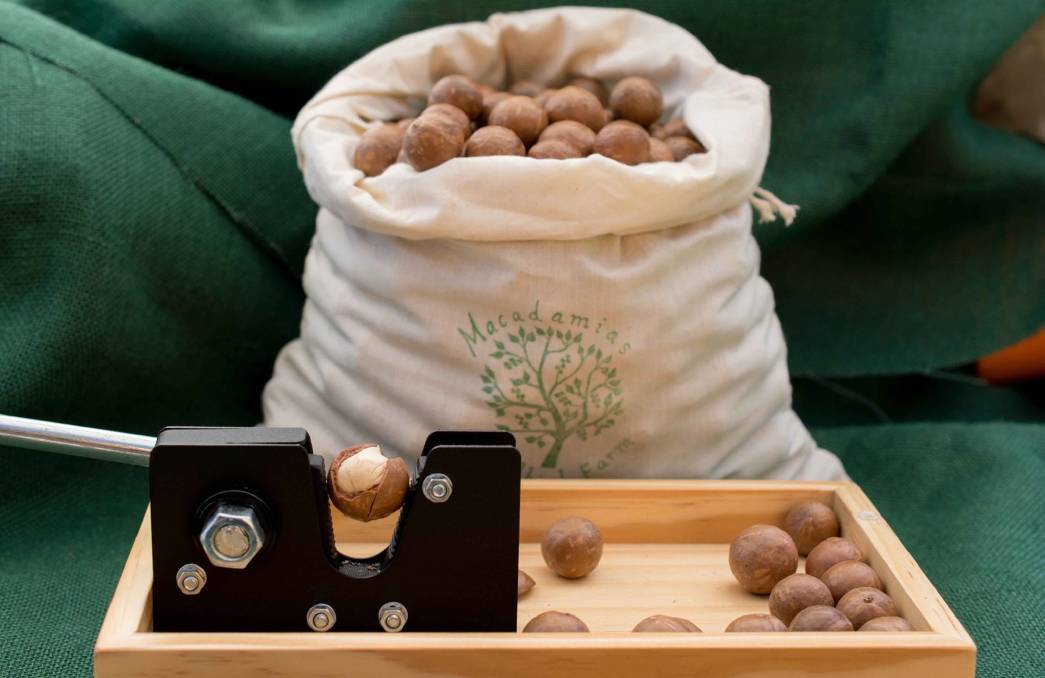 Nuts are dehusked and then cured on farm – slowly roasted in shell in a homebuilt, low temperature oven.

The nuts are combined in a one kilogram calico bag with a handcrafted cracker, the locally-invented TJ Nutcracker, for the initial package to the customer.

Following that, they are sealed in cryovac 2kg and 4kg bags. All are marketed on the internet. 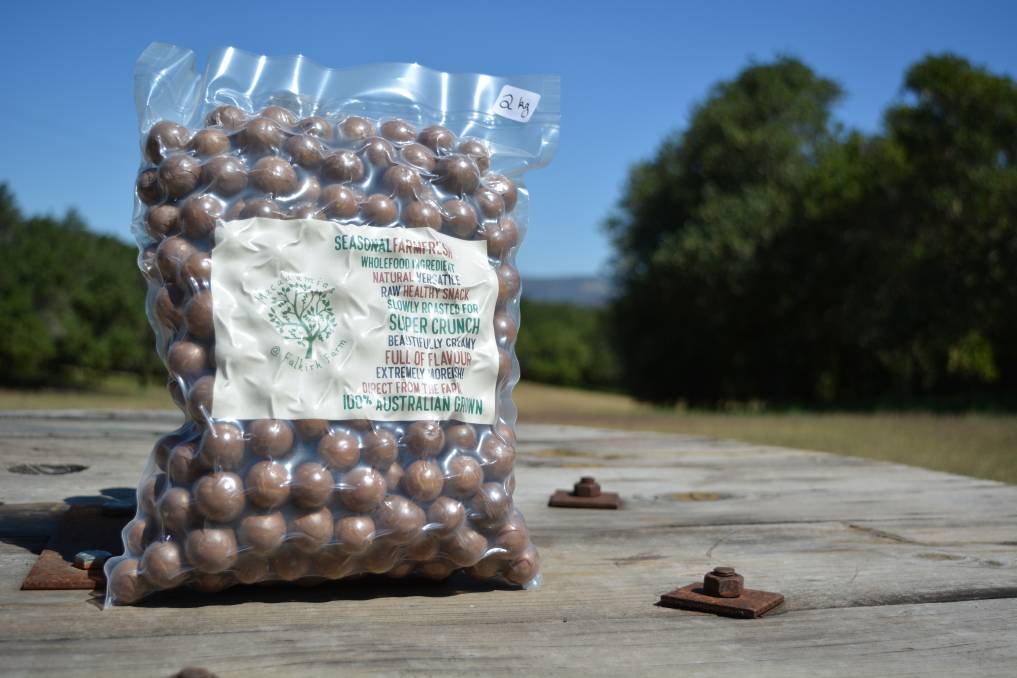 Only a small percentage of turnoff at this point is being sold this way but the hope is that will increase.

The plan is to take the product to food festivals to get the message out.

“There is a lot of gratification in seeing something we have worked so hard to produce appreciated and I love telling the story behind the production of our nuts,” Mrs Thomas said.

The rest of production from the farms is supplied to local processors as nut-in-shell.​

A teacher by trade, Aimee Thomas came into macadamia growing with fresh eyes and a passion for learning as much as she could from growers meetings and industry information programs.

It was this “different perspective” that led to Falkirk Farm’s novel nut redirection system, which has now captured the attention of the wider industry. 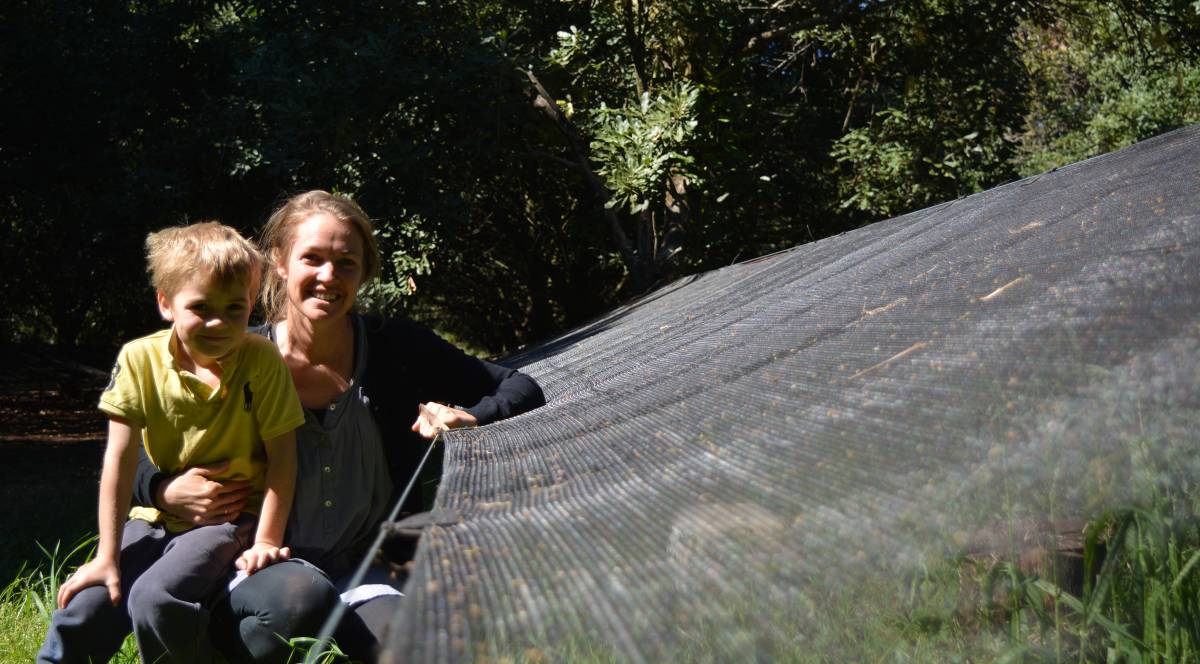 Aimee Thomas and son Harley with the nut redistribution netting they are trialing in their macadamia orchard.

With the value of what is referred to as the “magic metre” – that section directly under trees so critical to nutrient take-up and tree health – firmly in her mind as she drove the tractor through the orchard one day, Mrs Thomas came with the idea of using netting to make nuts roll into the mid row when they fall.

“The magic metre is where the fine feeder roots are,” Mrs Thomas said.

“It’s full of beautiful microbes and we mulch it to build up organic matter and protect it but then come harvest we blow it out.”

The couple have used 30pc shade cloth attached to wire posting so it comes 1.5m out from the trees, with steel posts every 10m and clips to keep the shade cloth in place, for their system.

Nuts literally bounce off and are pushed into the row centre where they can be swept up without touching the area under the trees.

They netted three rows last December as a trial and have reported a wealth of benefits, including alleviating both crop loss and quality issues.

Moisture retention, thanks to reduced evaporation from the soil, is of course the king benefit.

“Our initial observations are that moisture retention under the netting has been much higher than control areas but we’d really like some scientific input here and we’re open to working with anyone wanting to do this study,” Mrs Thomas said.

“We believe other tree crops could also really benefit from this technology.”

Reduced mowing, a faster harvest, less compaction from machinery around the root zone, the protection of the microclimate around the tree base and reduced needs for herbicide are some of the other benefits they’ve observed.

“We believe, however, the biggest bang will be in our steeper areas,” Mrs Thomas said.

That is where reduced nutrient runoff and increased irrigation efficiency could pay big dividends.

James and Aimee Thomas plan to do extended trials from here and hope to be able to put together a cost benefit analysis after two harvests are complete.