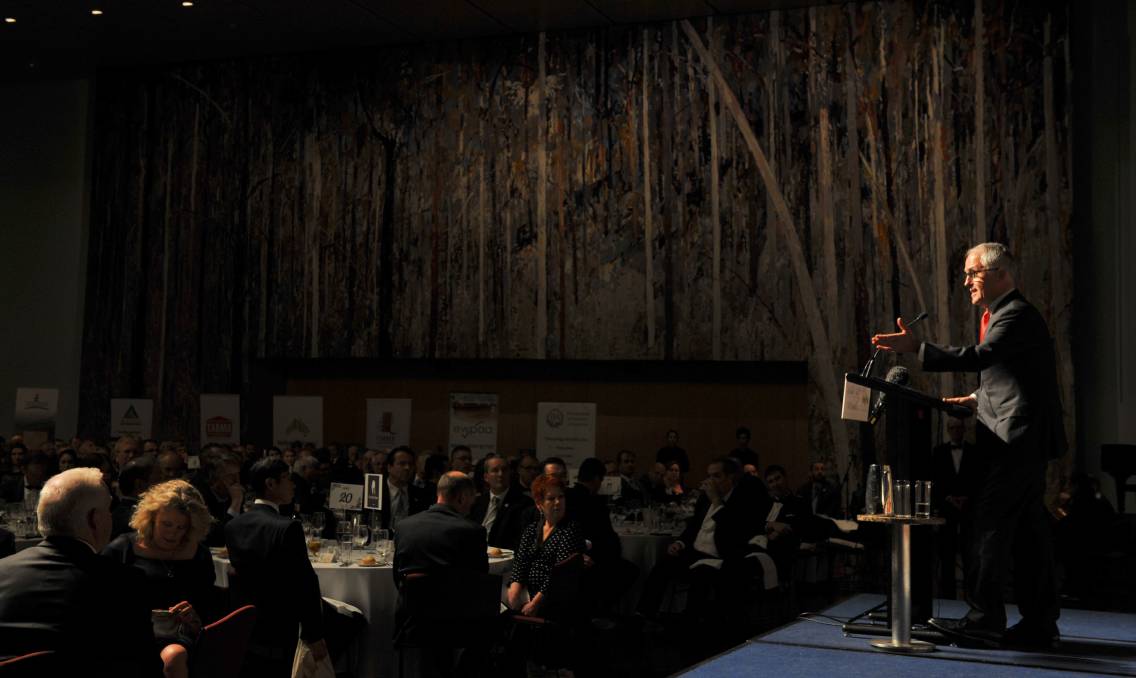 A STRATEGIC plan to enhance the $23 billion forest industry’s economic output - especially in the regions - has been revealed by Malcolm Turnbull.

A STRATEGIC plan to help inject longer term certainty and sustainability to boost the $23 billion forest industry’s economic output - especially in the regions - has been revealed by Prime Minister Malcolm Turnbull.

Mr Turnbull announced the National Forest Industries Plan would be pursued by his government to ensure the forestry industry was a “growth engine” for regional Australia.

He endorsed the strategy during his speech at the recent Australian Forest Products Association (AFPA) gala dinner held at Parliament House in Canberra.

“Now we understand that you have long lead times, you need long term certainty and so it’s vital that governments get the policy settings right,” Mr Turnbull said before about 500 guests including forest industry heavyweights at the event.

“So tonight I’m very pleased to announce that (Assistant Agriculture and Water Resources Minister) Anne Ruston will help us develop a new government plan that will underpin growth in the renewable timber and wood-fibre industry.

“Anne’s work and our new government plan will give you the vision and certainty you need.

“We’re committed to developing this industry as a growth engine for regional Australia.”

Senator Ruston said if you were given the challenge of inventing the ultimate renewable, recyclable, carbon positive thing, “I’d bet you’d invent a tree”.

“The modern face of forest products is engineers and chemists – just ask the guys at Visy and Australian Paper,” she said.

“Everyone is realising just how great forestry is and the huge role is can and should play in Australia’s future.

“The decisions of the Victorian government regarding the renewal of the Central Highlands and East Gippsland Regional forest Agreements are critical for the future of forestry in that state.

“Probably the greatest challenge facing our industry is investment in new plantations.”

Senator Ruston said the Australian forest industry directly provided tens of thousands of jobs, many of which supported rural and regional communities. “The Turnbull government reaffirms its strong support for the sector and is committed to further collaboration to achieve certainty into the future,” she said.

But he said “Our industries have changed dramatically since then and I am delighted the Prime Minister has recognised that it is vital that government and departments also update their approach”.

“The new government National Forest Industries Plan will, we trust, outline actions to support the industry to establish new plantations, increase investment and grasp opportunities in the emerging bio-economy to turbo-charge regional job creation and economic development,” he said.

But Shadow Agriculture Minister Joel Fitzgibbon said Mr Turnbull’s announcement of the plan was “a case of déjà vu for the sector”.

He said the forestry industry had suffered “numerous slights and disappointments” since the Abbott-Turnbull government was elected.

“Firstly “forestry” was expunged from the portfolio title,” he said.

“Then the failed White Paper process excluded the forestry sector entirely and now the government has announced the development of a ‘plan’, for the second time.

“The forestry industry will be hoping the second attempt will be faster than the first.

“Its last ‘discussion paper’ took the full term of the 44th Parliament:

“The Coalition government has entered its fifth year in office, and last night it announced yet another plan to have a plan.”

At the time, Mr McCormack said he welcomed the joint position statement on behalf of the 120,000 Australians working in renewable forest industries right across the whole value chain.

“Australia's forest industries not only pour $23 billion into Australia’s economy each year, we are the truly sustainable, environmentally friendly industry,” he said.

“In this country, every tree we harvest is replaced.

“AFPA looks forward to working with all governments to ensure the right policy settings open the way for further growth of our industries.”

In his speech at the AFPA dinner, Mr Turnbull said the forest industry was one that is “as old as Australia”.

“When the Ngunnawal people were caring for this country 60,000 years ago, they were harvesting the timber and forest products of this region to make all of the things they needed,” he said.

“Their utensils, their tools, their houses, everything that they needed.

“And so it has been the ultimate renewable resource…the forestry industry.

“It is an industry that is as ancient as mankind itself, but as new and as modern as the latest engineers, the most modern, most sophisticated engineers and science.

“Above all this is an industry that looks to the future, to advanced manufacturing, biofuels, new carbon-positive building such as XLam’s new cross-laminated timber plant near Wodonga, the first of its kind in Australia.”

Mr Turnbull said the Forest Industry Advisory Council’s vision outlined in its recent report into how to transform the forestry industry was “simple yet profound - expand into the bio-economy to triple your value by 2050”.

“Or put another way, ‘the right trees in the right place at the right scale’,” he said.

“Of course you have to remember that in Australia, not only do we have a lot of trees - but we have an extraordinary diversity of trees.

“I’m very keen on trees - it is a brilliant industry.

“Today the plantation estate stands at 2 million hectares and makes up about 80 per cent of the whole sector’s economic contribution.

“I think, there is a lot more that can be done in terms of plantations.

“So many more species, Australian species I’m talking about as well, that can be planted in plantations.”

“You have a wonderful, fascinating sustainable Australian industry.

“Trees just keep on growing and your commitment to it makes me proud, makes every Australian proud and I wish you every success in the years ahead.”