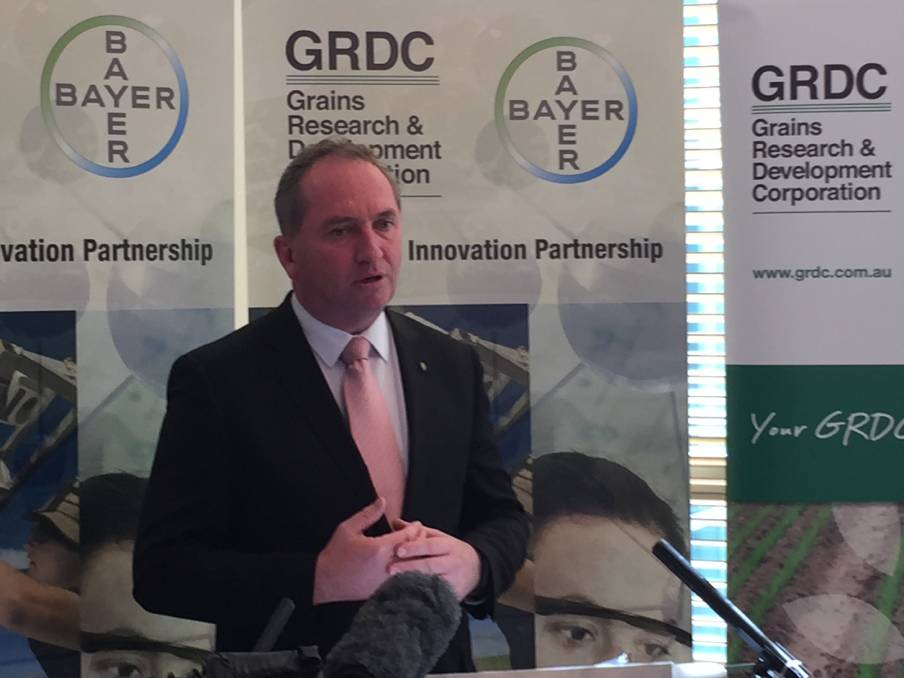 AN increase of $700 million in rural research and development (R&D) spending over a decade demonstrates the Coalition’s commitment to enhanced farm-gate returns, says Agriculture and Water Resources Minister Barnaby Joyce.

The Nationals leader and Deputy Prime Minister heralded the government’s backing of agricultural R&D and extension programs that aim to enhance producer profitability, after a new Australian Bureau of Agricultural and Resource Economics and Sciences (ABARES) report was released this month.

The report, ‘Rural research, development and extension investment in Australia’, crunched some big numbers on investment trends, from 2005-06 to 2014-15, measuring funding patterns from both public and private sources.

The ABARES report said the flow of funding through the R&D system - involving federal and state government, levy-payer rural Research and Development Corporations (RDCs), Cooperative Research Centres, the CSIRO, universities and private firms - is complex and was described by the Productivity Commission in 2011 as a “money-go-round”.

“The flow of funding between parties - as the result of leveraging, collaborating and funding application processes - creates a risk of double counting the R&D investment,” it said.

“We have developed comprehensive estimates but shortcomings in the data remain.”

The ABARES analysis said slower agricultural R&D investment growth in Australia during the 1980s had been linked to a slowdown in agricultural productivity growth during the 2000s.

But over the 10 year period in focus, total funding for rural R&D had increased from $2.3 billion to $3b - a $700m lift, in real terms - with both public and private sector funding sources increasing.

ABARES said a further $316m was also used in 2014-15 to also support extension activities that are designed to facilitate the adoption of technologies produced by R&D.

That figure comprised $179m provided by the public sector and $137m of private funding.

Total public sector funding for extension work declined between 2005-06 and 2010-11 but an increase in Australian government funding between 2010-11 and 2014-15 helped reverse the trend, the report sad.

Funding for sustainable production research increased from $433m to $485m.

Funding for agricultural inputs research grew from $98m to $162m, with private sector accounting for about 75pc.

Total funding for rural processing grew from $565m to $793m between, with the private sector conducting about 75pc.

Mr Joyce used the ABARES report to highlight the Coalition’s commitment to the RD&E program overall, pointing out investment in Australia had increased from $2.6 billion in 2005-06 to $3.3 billion in 2014-15, and the government’s contribution was $1.1b. 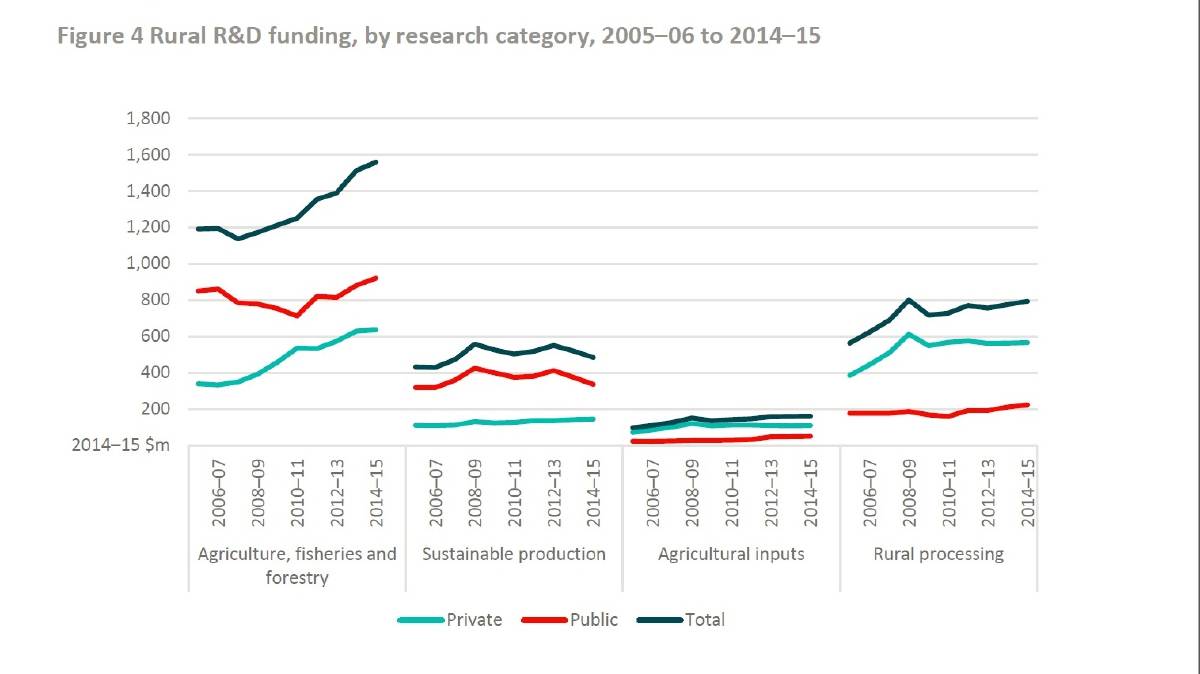 He said the Coalition government recognised RD&E’s “vital role” in boosting farmers’ bottom lines like delivering productivity gains, strengthening biosecurity and helping to ensure agricultural industries are competitive and profitable into the future.

“Rural RD&E has become increasingly important in Australian agriculture, with total investment growing by over $750m in the 10 years to 2014-15,” Mr Joyce said in citing the ABARES report’s release.

“We know this R&D investment delivers in spades - ABARES has previously found that for every dollar the government invests in agricultural R&D, farmers generate a $12 return within 10 years.”

Mr Joyce government and industry invested over $600m annually in research and development and extension through the rural RDCs.

He said the Coalition government’s $180.5m Rural R&D for Profit program was on top of that amount and was aiming to improve farm-gate productivity and profitability and deliver real outcomes for Australian farmers.

Grant funding of $114.7m has been awarded to 36 projects over the first three rounds of the program, matched by almost $170m in cash and in-kind contributions from successful applicants and their partners.

Mr Joyce said the Smarter Irrigation for Profit project, awarded $4m under round one of the Rural R&D for Profit program, was improving the profits of dairy, rice, sugar and cotton irrigators through comparing different irrigation systems and technologies.

The government’s $4m was matched by almost $6.4m in cash and in-kind contributions by industry and research partners.

“In 2016-17, the project held activities across 21 farmer demonstration sites involving almost 3000 irrigators, showcasing how these industries are improving their access to crop and climate based irrigation technology,” Mr Joyce said.

“By improving water application methods to improve the uptake and application of irrigation water to crops and pastures, farmers are now saving time, money and water, with improved yield and crop quality, boosting profits.”

The Rural R&D for Profit program was first announced as a $100 million program as a 2013 election promise and doubled to $200m in the 213 Agricultural White Paper, but has been cut by about $20m since then.

The Smarter Irrigation for Profit project is also investigating the use of automation technology for farming systems.

Some of its expected outcomes are; a 10 to 20pc improvement in water productivity, efficiency and farmer profitability; adoption of new irrigation technologies and science application by farmers and irrigation professionals to improve farm profits; and           improved cross-sector industry research collaboration with public and private sectors in four major irrigation industries, providing a legacy platform for other sectors to benefit.

Public sector funding from Australian and state and territory governments and universities grew relatively slowly compared with private sector funding, increasing from $1.376b in 2005-06 to $1.537b in 2014-15. 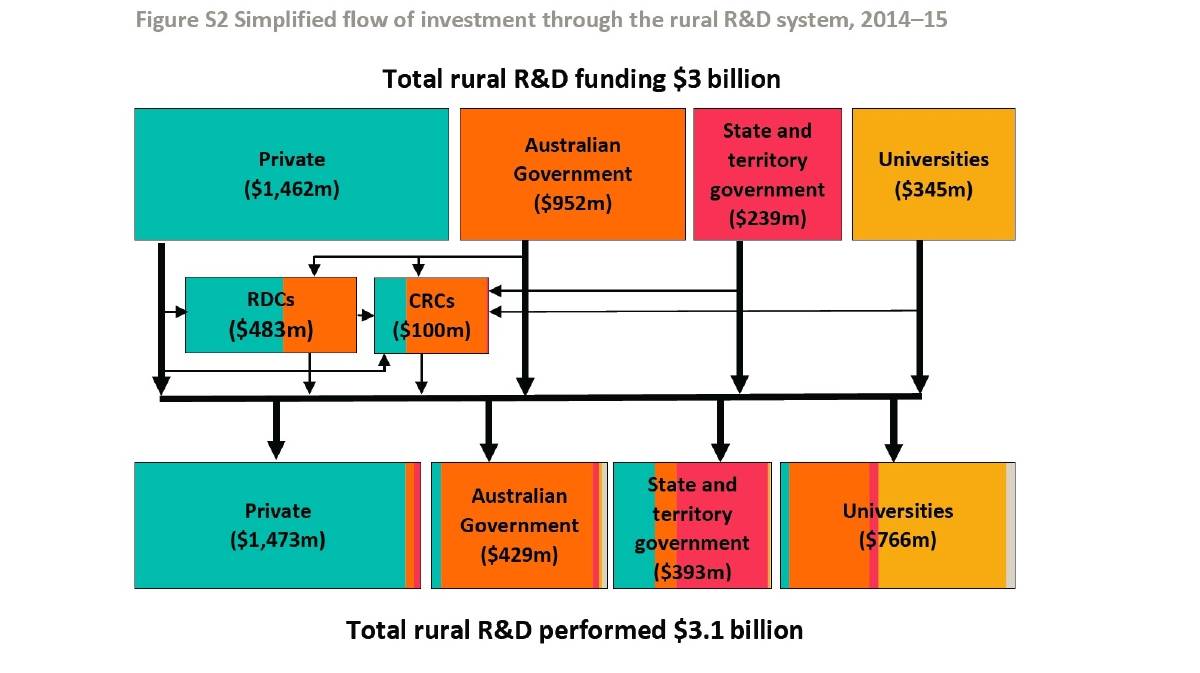 Australian government funding increased from $806m to $952m with the main source of growth being the increased cost of the R&D tax incentive provided to the private sector.

But the report said state and territory government funding declined in real terms, from $330m to $239m.

However, university contributions to rural R&D from student fees, royalties and income from assets increased from $240m to $345m.

Differences between public and private investments

The ABARES report said the public sector focuses on R&D that has a “greater likelihood” of market failure occurring.

“The farm sector is made up of many small firms, which are individually unlikely to capture all of the benefits from R&D including spill-over benefits to society,” it said.

“This has historically reduced incentives for individual farms to invest in agriculture, fisheries and forestry and sustainable research.

“In contrast, the input and processing sectors are dominated by a relatively small number of larger firms and the outputs of R&D can be more completely captured by those that perform it - for example, through patent protection on new chemicals.

“This creates stronger incentives for private investment in these kinds of R&D.”

ABARES said in the public and private sectors, the focus of R&D also varied depending on the funding mechanism used.

For example, public investment through the R&D tax incentive is largely focussed on rural processing R&D because this funding is driven by the investment decisions of private firms, the report said.

“In contrast, public funding delivered through other mechanisms - such as grants to CSIRO - tend to focus on agriculture, fisheries and forestry, and sustainable production, because this is where public benefits are expected to be greatest,” it said.

“Similarly, private sector investment that is channelled through the RDCs has a greater focus on agriculture, fisheries and forestry, and sustainable production than that which is undertaken directly by firms.”

“In some cases public investment in R&D can crowd out private investment but research in the United States suggests that the public sector tends to invest when the private sector has less incentive to do so,” it said.

“Evidence of high returns to research suggests that underinvestment in agricultural R&D remains a problem.

“The public sector still has a role to play in overcoming the market failure in agricultural R&D.

“As noted in the R&D tax incentive review, the government must encourage greater industry collaboration with research institutes to ensure R&D funding delivers ‘additionality and spill-overs’ - thus maximising the benefits of funding.”