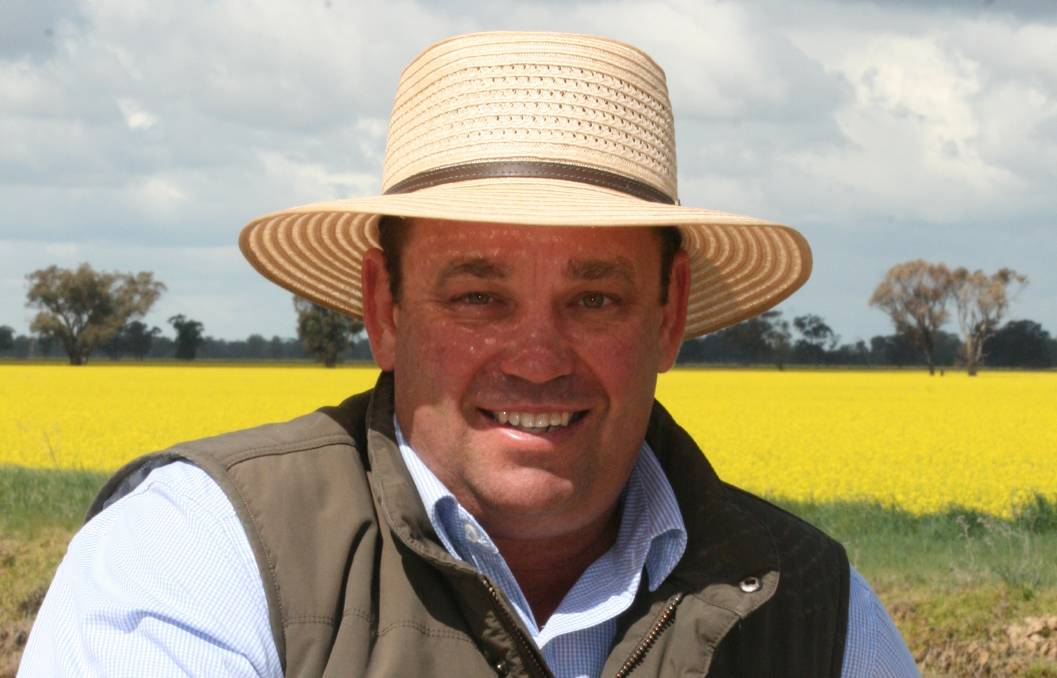 Andrew McFadyen has taken what he learned from corporate farm management at Paspaley Pearls back to the family farm at Lake Cargelligo. Photo: GRDC

EMBRACE the challenge, is just one learning Lake Cargelligo farmer and agronomist, Andrew McFadyen took from his fifteen year stint as a corporate farming manager and agronomist for the Paspaley Pastoral Company eastern seaboard aggregation.

Mr McFadyen, who returned to Lake Cargelligo last year, is now splitting his time between the family farm and running a successful agricultural consultancy business.

He believes there are a lot of lessons the family farm can learn from the corporate model.

“It brings discipline, as well as a set of eyes so you see things a bit of different,” Mr McFadyen said.

Mr McFadyen said one of the keys to success at Paspaley’s farm “Kurrajong Park” at Coolah NSW, was the right cropping rotation.

“We had a pretty tight rotation that we would map out for five years,” he said.

“But we included enough flex in it, that if we had a dry season, or an abundance of rain, we had enough flexibility in the system to be able to put opportunity crops in such as double crop sorghum, chickpeas and mung beans.”

Mr McFadyen said his experience had taught him to think about the whole farming system.

“I like to tie in the whole farm picture into the consulting and the family farm,” he said. Mr McFadyen said while it is still fundamentally important to get agronomics right in the paddock, the activities and timing need to be part of the overall strategy.

“Sitting down and getting rotations planned, talking about the bigger picture stuff like herbicide resistant weeds and new technologies.

“I really put a huge emphasis on planning.

“Growing dryland cotton at Coolah was a project we looked at really closely for five years and planned, and got it to a point where we got it in the ground and grew a profitable crop last year. “By planning we can actually bring back a profit at the farm gate level.

“At the end of the day, margin is king and you’ve got to have a profitable business that yields and has a return in investment.”

Mr McFadyen said his corporate career had taught him that formalising aspects of the farming business was important to both the bottom line and the resilience of the farm. Andrew McFadyen sits on the GRDC northern panel and is the chair of Grain Orana Alliance. Photo: GRDC

“Carrying out formal reporting and having a systematic method of looking at things such as budgets and crop rotations, is important,” he said.

“Putting together business proposals for capital purchases to help you make the right decision.

“By formalising these aspects we also build resilience into the business.

“Having good WHS policies set up, builds resilience to the business if someone was to have an accident.

Mr McFadyen said focusing on the human resources was another lesson learnt through his career.

“It’s all well and good to have some great pillars in your business around agronomics, marketing and capital, but people are the core of every business,” he said.

“So talking about your mental resilience in the farm business is important.

“You need to have the tools on the shelf to be able to have those discussions about the importance of getting away for a holiday and come back into the business fresh.”

THE BASICS ARE KEY

Mr McFadyen said his involvement in work Paspaley was undertaking in the Northern Territory taught him a lot.

“We were trying to test in the Territory what we were doing with our pastures on our eastern aggregation,” he said.

“There was an opportunity to there to push pasture production and try an increase weight gains, increase pasture growth.

“The real challenges of the territory are that you go from extremely dry to really wet in the space of a couple of weeks, so it was famine or feast.

Mr McFadyen said it taught him the importance of getting the basics right.

“It was a matter of tweaking that system and look at soil testing and putting some science in, so in this case putting sulfur and phosphorus on the country,” he said.

“We were getting results just with putting some of the principles we were using down on our eastern properties in NSW up into the Territory.”

Mr McFadyen is positive about future agricultural development of the Northern Territory.

“There are real opportunities for northern agriculture to be further developed,” he said.

“It’s got its constraints, be it the climate, lack of infrastructure or huge issues with exotic pests.

“But its got huge potential, fine tuning your system, streamlining it, making it more productive, it’s a massive opportunity in my opinion.”

Mr McFadyen said while on the job learning was important, his tertiary education had also benefited his career, but not just because of the ‘piece of paper’.

“I think it gives you the ability to think quick,” said Mr McFadyen.

“If a question is posed to you, you know where to go and how to get that answer.”

“After boarding school I was going to come home to the family farm, but I wanted a tertiary qualification first,” he said.

“I actually enrolled as a teacher for two years.”

Realising agriculture was his real passion, Mr McFadyen then completed a Bachelor’s degree from the Hawkesbury College of Agriculture in 1998, though he said his time studying education was not wasted, particularly the psychology of learning.

It is good to have the solid science, but you also need to be able to influence people at a farm gate level. - Mr Andrew McFadyen

“On the family farm and in a consultancy it’s important to have the understanding that rather than always leaning in and influencing the discussion, you can sit back and listen.”

Mr McFadyen said the overall benefit to having a tertiary education  was that it was a first step in life long learning.

“University training gives you a thirst and yearning for knowledge, I think that hasn’t subsided in my career,” he said.

A NETWORK FOR SHARING

Mr McFadyen said one of the most important places to learn was from others in your network.

Mr McFadyen said it was a two way street, and in the agricultural industry it was important to give back.

“The people I worked with, the people who were part of the cropping team and some of the younger guys we worked with, were one of the best things about working for Paspaley,” he said.

“A pretty good list of them have gone on to be successful in agriculture and I’d like to think being part of their development was a massive win.”

“We also used to take on Tocal students as well, hopefully giving a little back to the industry.” After fifteen successful years with Paspaley Pearls, Mr McFadyen chose to move back to the family farm, “Wilga Park” at Lake Cargelligo.

“Our family have had the property for over a hundred years, so you want to be part of that,” he said.

“The opportunity to work closely with my parents on the place was a big carrot. “Also to move back into the consultancy space at Lake Cargelligo, because I could see it was a huge gap.”

Mr McFadyen said the opportunity to bring knowledge back to his home district as well as the networks he had built was also a driver.

“We are in the northern Riverina and the soil types are quite varied,” he said.

“The western side of the district can have lighter, sandy soils which present some challenges, while clay loams and kurrajong country runs into grey hard setting clays as you move closer to the Lachlan river. “It is mixed farming country, tightly held by family farms.”

One of Mr McFadyen’s clients is the Murrin Bridge Aboriginal Lands Council.

“Working with them to build a sustainable enterprise is really rewarding,” he said.

“You want to be able to give back to the community and make a difference.”

“A lot of my clients are three to four generations on the one property,” he said.

“So they have a lot of intellectual property for how the farm is run, but also a lot of resilience.” 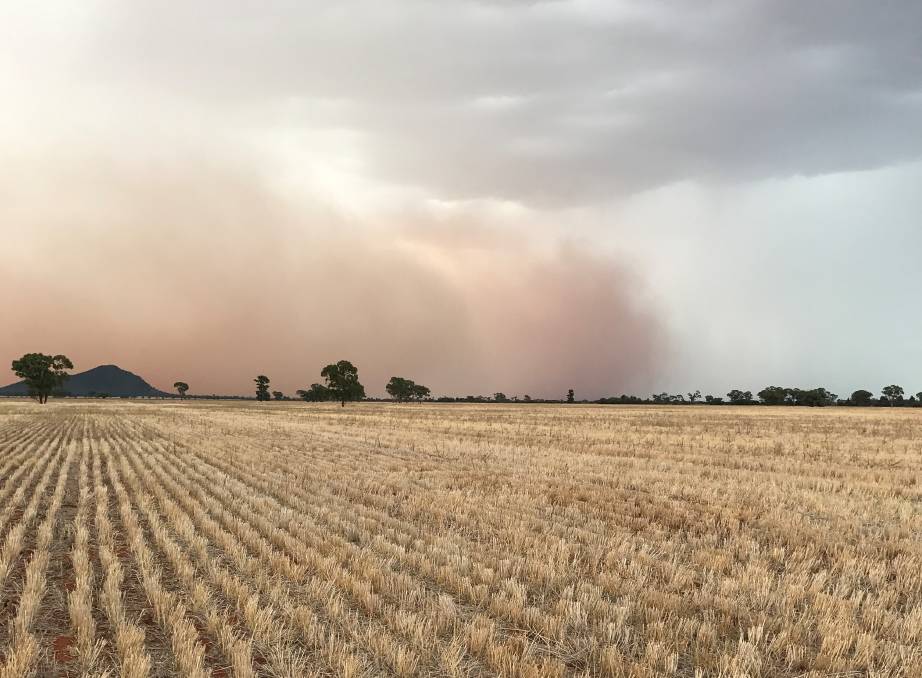 Mr McFadyen said the environment was a major challenge.

“Drought is a feature of the landscape out here unfortunately, and we are seeing that this year with a very tight year,” he said.

“The rainfall is really quite uniform, but the summers are just too hot to grow a dryland summer crop.

“Also the soils here, unlike the ones at Coolah, don’t store as much moisture so we really have to rely on winter rainfall on top of the amount stored through the summer to get our winter crops home.”

Mr McFadyen said while the traditional crops of wheat, barley and oats are still grown, there had been an increase in pulse crops.

“There is now more of a push into the lentils, lupins and field peas,” he said.

“In the mixed farming system lucerne plays a major role in the pastures for the fat lamb operations.”

Overall Mr McFadyen said Lake Cargelligo or the “Manly of the west” was a great place to live. “It is an oasis in the outback,” he said.

“You see a lot of tourists flock here in the summer as well as grey nomads in the winter to appreciate the bird life but also the water sports you can do on this fabulous lake.”

​Mr McFadyen is a founding board member of the Grain Orana Alliance (GOA) and the current chairman of the board.

“I have a passion for research, development and extension, I saw GOA as an opportunity to be part of something at a grassroots area in the Central West,” Mr McFadyen said. GOA is a not for profit research body that identifies grower issues through a series of engagement meetings, then conducts replicated research trials to provide answers to growers in the Central West of NSW.

You learn and get a lot back from getting involved with research, said Mr McFadyen.

“To be part of that process, working with switched on growers and researchers was a massive carrot,” he said.

“I enjoy the process of trying to nut out what the issues and ideas are, where the research needs to be channelled into.

“What I love about GOA is that it’s where the research rubber hits the road, it delivers at the farm gate level.”

Mr McFadyen said GOA was funded by the Grains Research Development Corporation (GRDC) and had over three projects delivered successful outcomes to growers.

“You can never forget at the end of the day the people funding the research are the growers,” he said.

Having firm science behind an agronomic recommendation or decision is important said Mr McFadyen.

“Rigour around your decision making process can really influence things at the farm gate level,” he said.

Involvement in GOA encouraged Mr McFadyen to join the GRDC northern panel in 2014.

“That has been a step up in trying to think and pushing the production frontier,” he said.

Mr McFadyen said that involvement in industry was a two way street and it was important that growers got involved.

“I’d argue that you get as much learning out of it as what you put in,” he said.

“It’s hugely rewarding and beneficial not only for your business development but your personal development.”