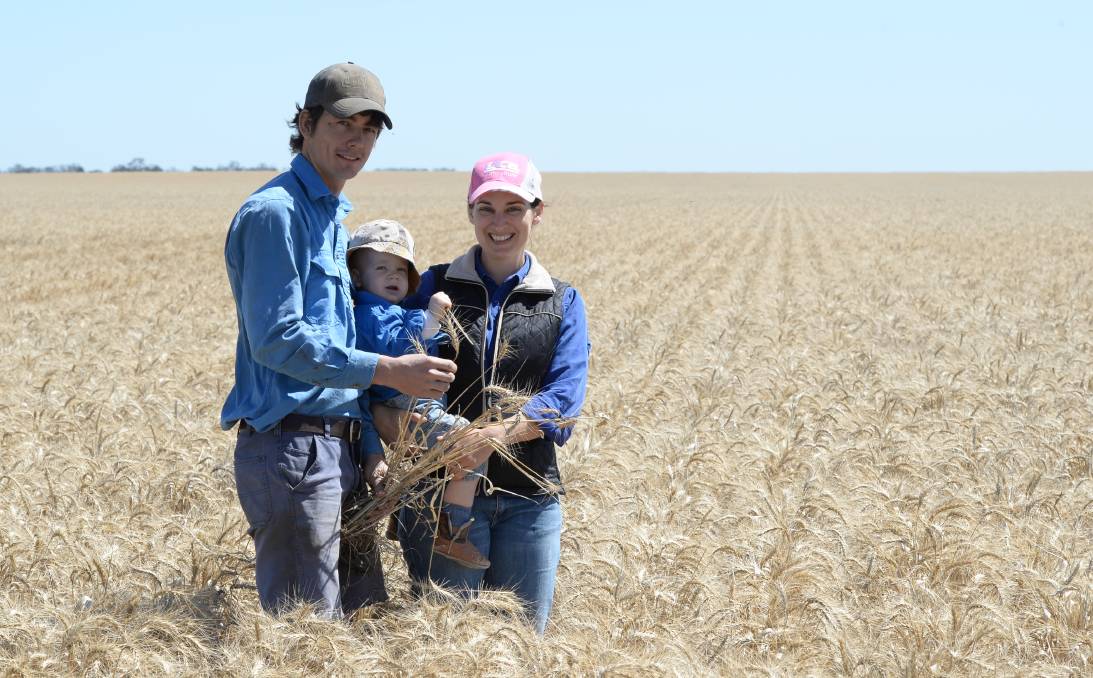 INFORMATION is not just data, according to Ben Boughton of Gilroy Farms.

Using information on farm is a passion for this farmer, Nuffield scholar and entrepreneur.

Gilroy Farms, situated north east of Moree, is in the prime agricultural area known as the Golden Triangle of NSW.

Mr Boughton is involved in management decisions on the family enterprise, including agronomy and investment as well as day-to‐day farming operations, working with parents Randall and Donna and wife Olivia.

Gilroy Farms covers 2500 hectares of dryland cropping country, which is predominantly cropped to wheat, barley and chickpeas in a winter dominant crop rotation.

“We are trying to do the best practice farming for our area,” Mr Boughton said.

“Things like three-metre control traffic, zero till and precision planting."

His original expectation was to collect the information collected via self-built drones, but first hand experience has convinced Mr Boughton satellites are probably better.

“We use the satellite imagery under two main categories – in a fallow period and an in-crop period,” he said.

“In a fallow period we will use it to monitor weed outbreaks.

“If a patch of weeds is big enough it will actually show up as vegetation in a fallow paddock.

“It doesn’t show individual weeds, but it does show your escapes and it can be quite effective in pinpointing the areas that you need to focus on as far as your summer spraying program.” “We were able to see last year the areas that were most likely going to contain the botrytis grey mould or the ascochyta blight in the chickpeas,” he said.

This was because satellite imagery could distinguish the areas with higher levels of plant biomass which favours disease.

“So it makes your scouting more efficient.”

Mr Boughton said a practical example of this was looking for heliothis or other larval pests.

“Because they will generally congregate in the higher biomass areas, we’d go straight to those places first,” he said.

Vegetative indexes measured from satellite correlate with the photosynthetic capacity of the plants.

In layman's terms it measures “green”, which, Mr Boughton said, can be used to help plan harvest.

“At the moment we’ve been using it to help with harvest timing,” he said.

“As the crop starts to turn, the green will exit the leaf.

“Crops that are going to be ready to harvest first will show up in the imagery.” This allowed the Boughtons to better plan harvest logistics, and where they would need to send machinery.

“There is probably a 20 to 30 kilometre spread across the blocks,” he said.

“We can get a feel for what's happening within the blocks and start to plan what's going to happen harvest wise.

“So, we know where we are going to be and when.”

Mr Boughton said having an over-crop view could also give him information which may not be readily apparent from the side of the road.

“You are able to see patches that might still be green in the middle of the paddock, that you don’t know about from driving around the edge,” he said.

Mr Boughton’s keen interest in “eye in the sky” sensing technology helped him score a 2014 Nuffield scholarship, sponsored by the Grains Research and Development Corporation (GRDC).

“We were at a fortunate point on our farming enterprise where we probably could afford to have someone go away for 16 weeks,” he said.

“I had this interest in remote sensing, so I thought now is the time to do it.”

A driver for his application was making better decisions on farm.

To make better decisions in farming we need to be able to collect accurate data and have control over that data. - Mr Ben Boughton

While studying remote sensing and in particular the use of drones during his Nuffield tour, Mr Boughton ultimately concluded there was more benefit in using satellite imagery on his farm.

“I went overseas and did a lot of research on drones but came back with the conclusion they are fantastic, but they are a lot of work,” he said.

“At the moment there is a lot of legislation prohibiting you from flying them beyond line of sight which for broadacre cropping it just becomes inefficient.

“So we drifted away from drones to satellite imagery for that reason only.”

Setting up a side business to the farm was a direct result of Mr Boughton’s Nuffield scholarship.

“The satellite imagery industry is probably growing just as much as, if not more than, the drone industry.

“It’s something exciting to be involved in, because there’s a lot of new satellites being launched all the time.”

SATAMAP: THE ANSWER TO SIMPLIFIED FARMING

“Satamap is best described as Google maps but for farmers and agronomists,” he said.

“It is a satellite imagery layer, with roads and towns displayed over the top of it."

Updated about every five days, depending on cloud cover, Mr Boughton said Satamaps also included a vegetative index, which was similar to a normalised difference vegetative index (NDVI) to the imagery to measure biomass.

“The process is a subscriber logs into a web page,” he said.

“You are then able to zoom into the farm and pan across all your paddocks.”

Satamaps also allowed him to carry out some local benchmarking.

“You can benchmark yourself against your region,” he said.

“Any of the neighbours’ paddocks and the nearby paddocks are available to look at as well.

“So you can see what's going on across the district.”

Mr Boughton is excited about the future of Satamaps, but he wants to keep in mind his end user. “There’s a lot going on in this satellite imagery space, so my focus is to keeping the end user in mind always.

“I’m not adding any new features in, or adding more data in, until I know it’s actually going to add value to their operation – to their decision making.

“Rather than just bombarding them with hundreds of data sets, its putting the valuable ones into the platform and making them easy to understand.”

Mr Boughton said his experience with the satellite technology and its potential began during his work experience at university.

“I studied university at University Queensland, Gatton,” he said.

“I did work experience with CTF Solutions, in about 2005, they were using high resolution satellite imagery.

“That was my first exposure, and they were doing a good job trying to teach everyone the potential of the imagery back then.”

“I worked in corporate machinery for 12 months,” he said.

“I was a training instructor. The dealers came to Brisbane and it was my role to educate the dealers on the new tractors.

“It built my confidence, I met a lot of people and saw a lot of processes I hadn’t come across before.

“It changed the way I thought about a lot of things.” 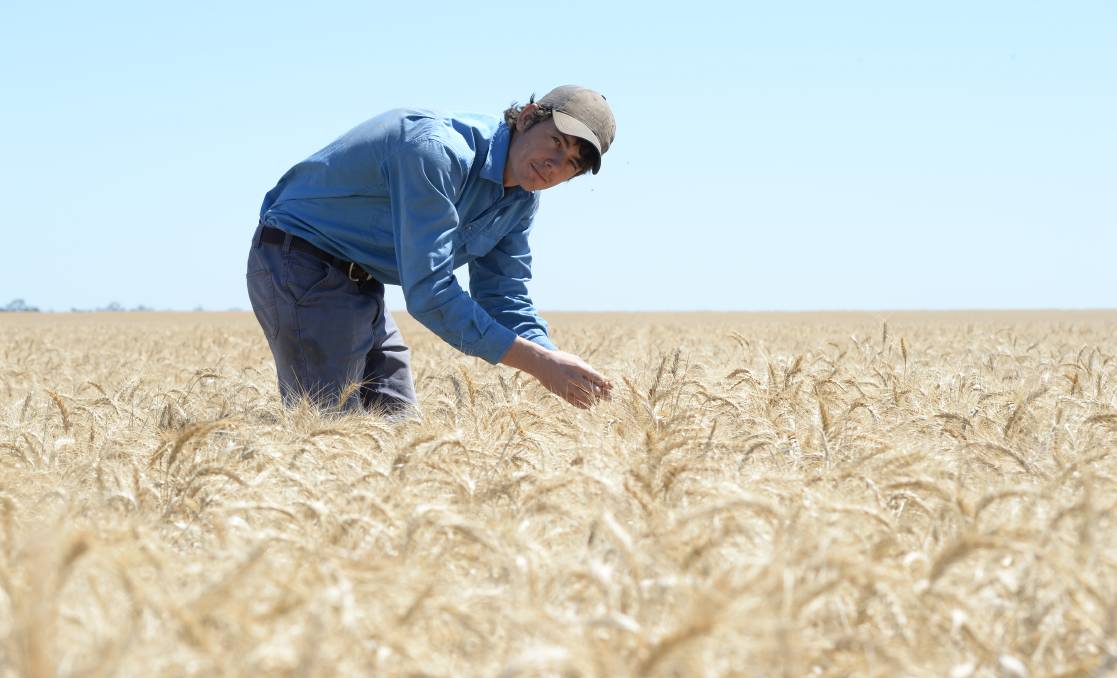 When Mr Boughton returned to the farm he retained an interest in satellite imagery and remote sensing.

“I started building my own drones on the farm, to monitor our crops better to see if they would supply us with information we couldn’t get from yield maps,” he said.

“I thought there was the potential with the drones to see weeds down the rows, to see machinery stuff ups, to see if we could understand what was going on better from an aerial perspective.

“You always see things you didn’t know about when you fly over a paddock in a helicopter so I wanted to replicate that process.”