Producers 'wait and see' on weaner purchases, despite good feed. 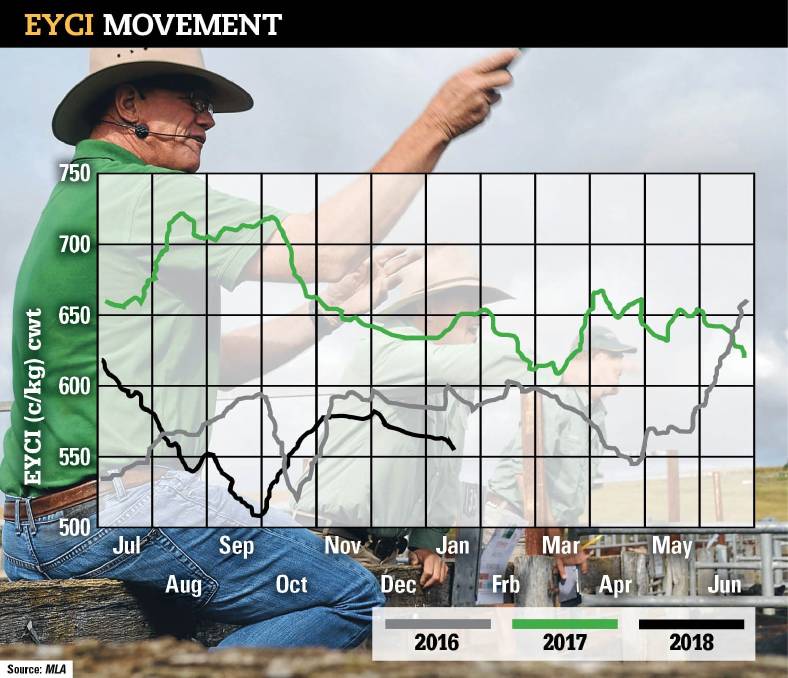 RESTOCKERS finally appear to be taking the view the run of favourable trading margins courtesy of a continually rising market has come to an end.

As backgrounders have opted to stay their hand at southern weaner sales, cattle prices have fallen abruptly from mid-December rates.

The Eastern Young Cattle Indicator (EYCI) is sitting at 562.75 cents per kilogram carcase weight, compared to 617c/kg in the week before Christmas.

Dryer-than-forecast conditions, particularly in Northern NSW and Queensland, have also helped tipped the scales further in favour of reduced restocker competition at saleyards.

Adding further weight are the problems for beef export competitiveness being presented by sharp gains in the Australian dollar, which has risen 3.5 cents against the United States dollar since Christmas.

Australia’s finished cattle prices were now at the upper end of the competitive range into the US, Commonwealth Bank agri analyst Tobin Gorey said.

The picture compared to other exporters is less clear, however, since they too have seen their currencies gain against the Greenback, he said.

While industry predictions are for the herd rebuild to keep young cattle prices above the five-year average during 2018, for the short term that could be swamped by dry conditions and restocker hesitance, analysts say.

While prices were back to, or below, pre-Christmas rates for the most part at southern weaner sales, some cattle did sell above expectations, particularly in Victoria where big processor Thomas Foods International was active, despite a devastating fire at its Murray Bridge, South Australia, plant.

SA was far more lacklustre, with some vendors opting to see pens passed in rather than accept the prices on offer.

The big surprise has been the lack of interest from Western Victorian backgrounders who have good amounts of green grass on hand.

Veteran southern cattle market attendees estimated this buyer group accounted for less than three per cent of purchases this year, compared to some years where they’ve made up to 40pc.

Interstate restockers were also not there in typical numbers, although they have chipped away continually and probably taken similar volumes as last year, with cattle going mostly to Dubbo and the Northern Tablelands.

Beef consultants say the feedback they are hearing from clients is that given it’s not “do or die”, with many months of potential buying time ahead of winter, a wait-and-see approach has been taken, even where there is feed to spare.

“A lot of producers are asking themselves what is the cost of carrying these weaners for the next three months and what does that look like relative to where the market might be in autumn,” said NSW’s John Francis, Holmes Sackett at Wagga Wagga.

As well, Northern NSW consultant Bill Hoffman said at the back of minds of anyone in the market for weaners was the limit to what feedlots can pay, given rising grain prices and downward pressure on prices at the point of slaughter.

The biggest driver of decisions at the moment is the differential on a price per kilogram basis between what they will pay now and what they will sell for, according to Mr Hoffman.

“It is not a rising cattle market anymore,” he said.

“The need to rebuild will offset that to a degree but as people look more in depth at their long term trading position, they are more likely to sit and wait.”

Mr Hoffman said some northern NSW feeder steer producers made a decision just prior to Christmas to hold cattle and utilise the feed they had to put extra weight on, targeting a heavy MSA (Meat Standards Australia) or certified grassfed market instead.

Mecardo analyst Angus Brown said weaner prices were now at an average premium to the EYCI, suggesting they are close to fair value.

“The lack of rain in northern NSW and Queensland since mid-December has helped keep a lid on prices, with premium to prime and feeder cattle much weaker than last year,” he said.

Also at play in Western Victoria was the push to restock sheep, given record lamb and wool prices, he said.

“This might also see mixed farmers holding off on buying cattle to trade, with more sheep on hand,” Mr Brown said.

Growing weaners out for the feedlot market should still be a profitable exercise, provided a reasonable autumn break arrived, he said.

“It’s harder to know what will happen in prime heavy cattle markets further down the track, but they should find some support from tighter supply until the spring,” Mr Brown said.