A quick look at some of the players and issues making news in agribusiness.

SunRice has awarded Annabel Arnold from Berrigan in South West NSW the Jan Cathcart Memorial Scholarship, to support her Bachelor of Agriculture studies at the University of Melbourne.

Miss Arnold, daughter of Gill and Max Arnold, a second-generation rice grower, said growing up on her family’s farm had inspired her passion for a career in agriculture.

She hopes to use her degree and work experience with SunRice to be a part of the ongoing drive for effective water allocation for rice crops.

Valued at $10,000 a year for up to three years, the scholarship  supports women pursuing a career in agriculture.

Jan Cathcart worked in the rice industry for more than 43 years, commencing with the Rice Marketing Board in 1971 and joining SunRice’s grower services team in 1985.

Consumer research group, Roy Morgan, says despite negative publicity surrounding the newly initiated banking industry Royal Commission customer satisfaction with banks in the six months to January 2018 was at 81.2 per cent - up from 80.8pc in December.

This sits well above the long term average of 73.8pc calculated since 2001.

The CBA has maintained the highest satisfaction rating among the big four with 80.1pc, followed by the NAB (79.1pc). 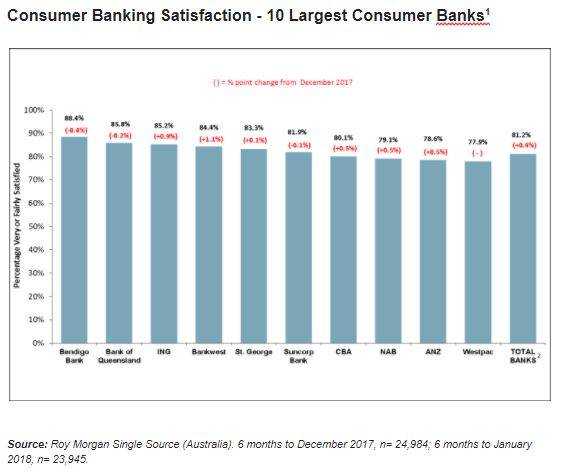 Lenders outside of the big four with improved satisfaction levels (up to 1,1pc) were Bankwest, ING and St George.

There were small declines in satisfaction with Bendigo Bank (down 0.4pc), Bank of Queensland (down 0.2pc) and Suncorp Bank (down 0.1pc).

Mortgage customers of the smaller banks continued to have higher satisfaction ratings than the big four.

Non-mortgage customers have the highest satisfaction among the big four.

“David has spent the past 20 years in Asia and has significant experience within the wine and spirits categories across North Asia,” Mr Clark said.

“David has undertaken multiple roles for ASC Fine Wines, one of the largest importers and distributors of Australian wines in China, including sales vice president.”

Bubs expands, at a loss

Infant formula youngster and specialist in goat dairy products, Bubs Australia, has posted a pre-tax loss of $3.8 million for the first half of 2017-18

The company says significant domestic growth in supermarkets and pharmacies, and through wholesale distribution channels, accounted for 82 per cent of first-half gross sales.

The expansion of domestic activity has been a priority before international expansion into China in the second half of the financial year.

“The successful acquisition of NuLac Foods in December created further options for growth with Bubs to become Australia’s only vertically integrated producer of goat milk infant formula and capacity to meet demand with milking goats in Australia and New Zealand,” he said.