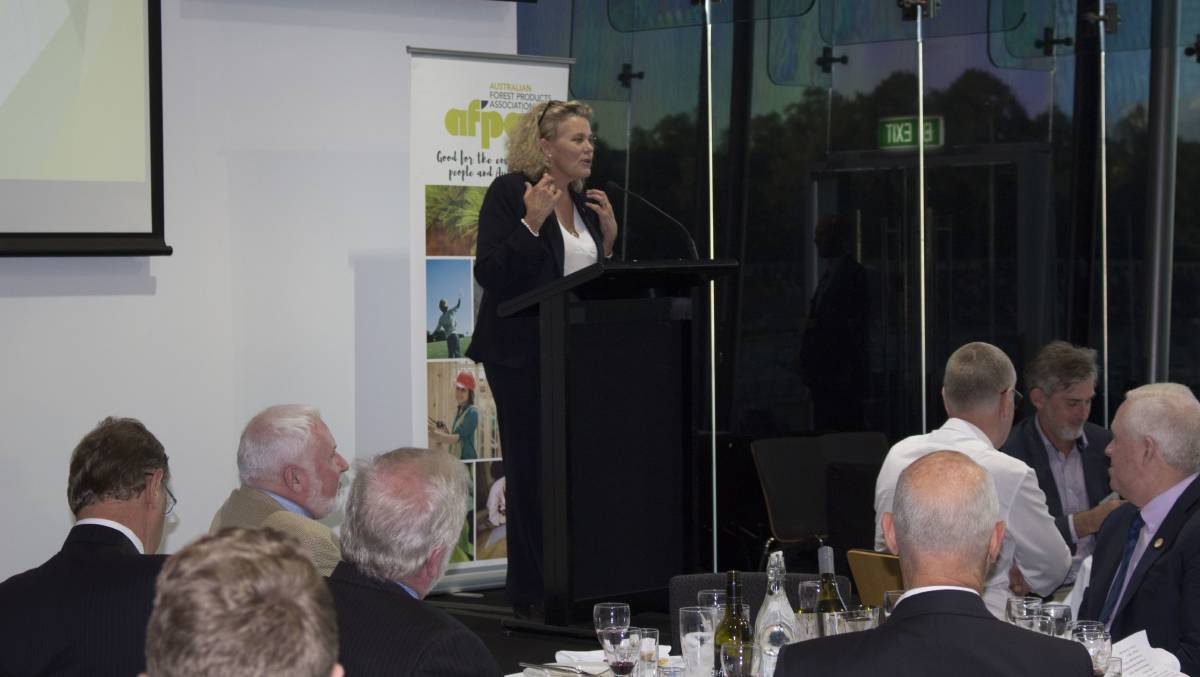 TREES are not the enemy of Australian farmers and agriculture shares more common ground with the forestry industry than they realise, says the NFF.

TREES are not the enemy of Australian farmers and agriculture shares more common ground with the forestry industry than they realise, says National Farmers’ Federation (NFF) President Fiona Simson.

Speaking to Australian Forest Products Association (AFPA) members at an event in Canberra this month, with an audience that included Assistant Agriculture and Water Resources Minister Anne Ruston, Ms Simson expressed a strong desire to knock down and clear away ideological barriers between the agriculture and the forestry sectors.

AFPA has been an NFF member since late 2015 and has recently indicated it wants to give farmers greater financial incentive and rewards to plant trees, in the $24 billion industry’s strategic plan, that’s being developed with the federal government.

Ms Simson said in her speech that the NFF was excited about working with the AFPA on a “rejuvenated quest to see farm forestry, commercial tree plantings, become a larger part of our farm landscape”.

“Farmers often get a bad rap when it comes to trees,” she said.

“But trees are not our enemy – really they are not.

“Actually, nothing could be further from the truth.”

Ms Simson said since becoming NFF President’s she’s been “fascinated” to learn more about the complex business of forestry including its end products, markets and the “great lengths” the sector is going to, to ensure sustainability.

She said she’d also learned about the large volume of timber products that Australia imported; an issue that’s currently challenging the sector’s viability due to escalating building costs.

“I think it’s something we as a primary production sector can work cooperatively on,” she said.

“AFPA has been a member of NFF for about two years now.

“Some might ask, ‘don’t farmers and foresters compete for land and to a lesser extent water?’

“To some extent, this is true - but in my mind, and what I think the partnership to date has demonstrated, is that we have more in common than not.”

Mr Simson said the policy platforms and the advocacy battlegrounds of the two industries were “largely the same”.

She said like foresters, farmers needed markets for their produce with market access via preferential trade agreements and tackling non-tariff barriers “all crucial to our continued good fortunes”.

But to bolster farm forestry initiatives, the shortcomings of the past must be addressed she said.

Ms Simson said “unresolved challenges” had also resulted in the farm forestry sector not yet reaching its potential.

She said that unrealised potential came down to factors like; uncertainty around the process of recognising carbon rewards or credits; a lack of understanding of how to harvest and market timber; inadequate timber harvest and haul infrastructure; difficulty in growing and harvesting a large enough haul to make farm forestry economical; and market access.

“Luckily, these challenges are not insurmountable and to address them, we have the benefit of being about to look to our international counterparts for guidance,” she said.

“In Scandinavia, southern parts of the US and in New Zealand there is a long history of wood supply from a large number of small private landholders and farmers as well as the development of marketing cooperatives.

“In Sweden and the US, 50 per cent of forestland is owned by individuals and families.

“In New Zealand, almost 600,000 hectares, or 34pc of the plantation forest, is owned by individuals with parcels with no more than 10,000 hectares.

“Agriculture is our nation’s third most emissions intensive industry.

“As a sector, we recognise our role in lowering Australia’s overall emissions.

“Being able to demonstrate carbon sequestration capability can only be helpful to this end.

“Overall, for farm forestry to be successful in this country, we need to foster strong linkages between farmers and the forestry sector.”

Ms Simson said the NFF supported the AFPA’s calls for a collaborative industry-run Forest Industries and Agriculture cross-sector strategy to deliver an integrated farm forestry program and $1 million in seed funding for the establishment of farm forestry co-operative development.

But he said “we know we have not always done all we could” to make the partnership work and ensure a long term positive for the farmer; both in terms of the timber income and the added productivity which trees bring to the principal farming enterprise.

Common ground for farming and forestry

She said they were all “important and lingering areas that need policy and thought leadership going forward”.

“Australian agriculture, when included with forestry, reached a record $60 billion production value in 2016-2017,” she said.

“There are always exceptions, but overall commodity prices are great.

“Wool has reached or surpassed its historic lofty heights, global demand for our red meats continues to grow and our fruit, vegetable and nut industries are enjoying the benefits of recent free trade agreements.

“The good times are here, but we are not resting on our laurels.

“It is a bold, but I believe achievable target.

“Reaching $100 billion will mean challenging the status quo, questioning a business-as-usual approach and thinking outside the square.

“It is opportunities like farm forestry ventures that could well play a cumulative role in increasing agriculture’s production values.”

Ms Simson said the Landcare program’s success meant farmers appreciated the benefits of having trees in the farm environment.

She said the program had also been successful in integrating agriculture and environmental management through a grass roots approach, which was replicated in more than 20 countries.

“Shade and shelter for livestock, soil protection including salinity control and the promotion of natural biodiversity are just some of the on-farm benefit of trees,” she said.

“Of course, farmers need to balance the area planted and retained for trees with the significant task of feeding and clothing the world.

“And this is the great opportunity farm forestry presents.

“The chance to incorporate soft-wood plantations on a commercial scale into existing farming systems.

“It really offers a win-win opportunity for farmers and foresters.

“We are sensitive when we see produce from other countries, that we grow in abundance here, on our supermarket shelves.

“It is on this point that we sympathise with our forestry sector.

“It just does not feel right, that we should be importing timber products, which we could produce here in an arguably a more sustainable and more economical manner.

“We absolutely support a strong vibrant timber sector in Australia and we simply must have a robust, transparent and equitable system to prevent illegal dumping of product in the domestic market – this goes for as much timber products like paper as much as it does for tomatoes from Italy or dried fruit from Turkey.”