TRIBUTES have flowed for ‘larger than life’ Nationals federal vice-president Dexter Davies who passed away at the weekend. 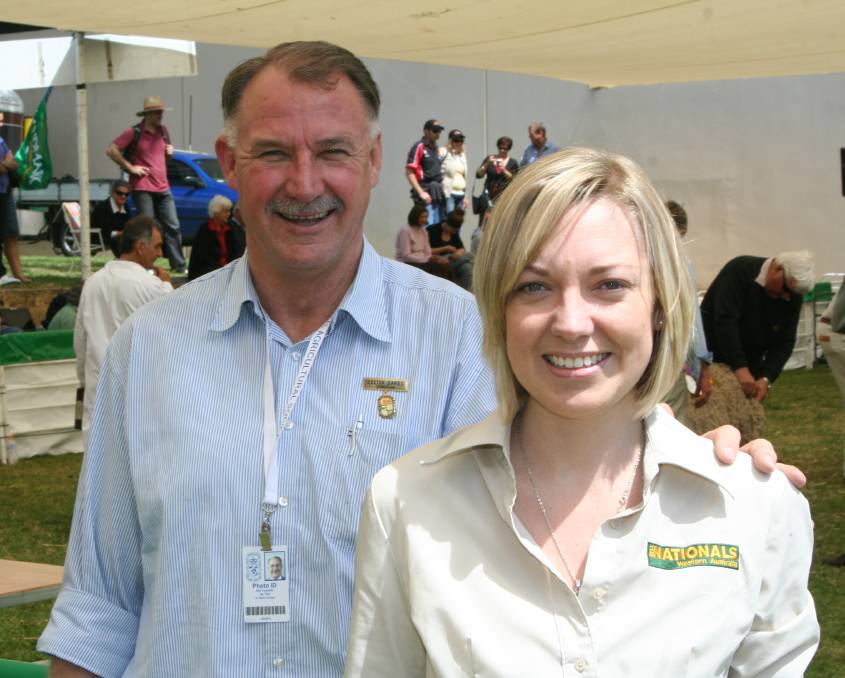 Nationals federal vice-president Dexter Davies who passed away at the weekend with his daughter and WA Nationals leader Mia Davies.

TRIBUTES have flowed for ‘larger than life’ Nationals federal vice-president Dexter Davies who passed away at the weekend.

Mr Davies - the father of current WA Nationals leader Mia Davies - was a driving force in rural policy and politics who held a range of leadership posts and served in the WA Upper House for the Agricultural Region from 1998-2001.

He passed away at the weekend surrounded by his close family, having lost his recent battle with lung cancer at the age of 66.

Born in Kellerberrin in 1951, Mr Davies played 14 games for East Fremantle in the Western Australian Football League in the late 1960’s and early 1970’s and in his later years was a leading force behind Claremont-Nedland’s success in the WA Cricket Association’s (WACA) grade cricket competition.

He played first grade for the club when it was then known as Claremont-Cottesloe and was its President from 2002 to 2013 in an era that delivered a long overdue first grade title in 2005-06 and also provide multiple players for state representative duties.

Mr Davies also served on the Western Australian District Cricket Council on the WACA Board from 2007 to 2011 and was a member of multiple farming related boards like the WA Dry Season Advisory Committee, as its Chair for 10-years from 2001 to 2011, which provided high level advice to the federal Agriculture Minister on when and where to provide financial and social services support to battling farming communities.

He was also a political adviser to WA government ministers for the Nationals in more recent years and WA Nationals President from 1989 to 2001, before entering parliament.

Former federal Nationals director Scott Mitchell worked with Mr Davies during his time in WA as Chief of Staff to former WA Nationals leader and Agriculture Minister Terry Redman and said Mr Davies was “larger than life” and influenced many; including younger members of the rural party.

“The passing last weekend of Dexter Davies was a great loss to many, in the sporting fields of cricket and football and politics,” he said.

“Dexter was larger than life, a man of enormous integrity who amongst many other things worked tirelessly his whole life for the Nationals.

“Dexter believed rural and regional Australia deserved and required specialist representation and his commitment to that through the Nationals was untiring to his early and untimely passing.”

Mr Mitchell said a lasting commitment of Mr Davie was to mentor and support younger people coming through the party.

“On a personal level he was a mentor for almost 20 years and was always, no matter what he was up to at the time, there even late at night for a refreshment,” he said.

“He will be missed and will never be replaced.”

Federal Nationals President Larry Anthony said the party’s sincere thoughts and prayers were with the Davies family as they mourned the loss of a true gentleman, dedicated family man and champion of the party.

“We are devastated at the loss of Dexter after a tough battle with illness,” he said.

“Dexter touched the lives of so many in the Nationals’ family.

“We have lost a trusted mentor, a great political strategist, a fierce party advocate and most of all a great mate.

“Dexter connected with people from all walks of life, enjoying enormous respect and genuine warmth from people across the political spectrum.”

Mr Anthony said Mr Davies’ heart was in the Central Wheatbelt, where he successfully farmed in partnership with his wife Leonie and his brothers for some 20 years.

“Since 2015, Dexter has provided a wealth of trusted advice and guidance to the party as federal vice-president and strongly represented the views and interests of the WA Nationals,” he said.

“The Nationals will miss Dexter’s passion, his wit and his generosity.

“He will be remembered as a man of great honour, dedication and a true champion of the party.”

But his “other great love” was the Nationals and being a champion of the bush.

“Dexter was a giant of Western Australian politics and has held crucial roles for the Nationals at both the State and national level since joining the party as a member in 1979,” he said.

“Not only was Dexter a champion for regional WA but he was also a champion footballer and cricketer, playing with East Fremantle in the WAFL and Claremont Nedlands in district cricket.

“Dexter was also Chairman of a number of organisations around the State and played an active role in mentoring Young Nationals and the development of many members of the Party.

“Dexter leaves an indelible mark on the political landscape and his legacy in making regional Western Australia a better place is everlasting.

“Our thoughts are with his family at this difficult time.”

The WACA issued a brief statement saying Mr Davies was a strong ambassador for club cricket and its value to the cricket pathway system and during his farming years at Wyalkatchem, played in many Country Week Cricket Carnivals and was selected in the WA Country XI.