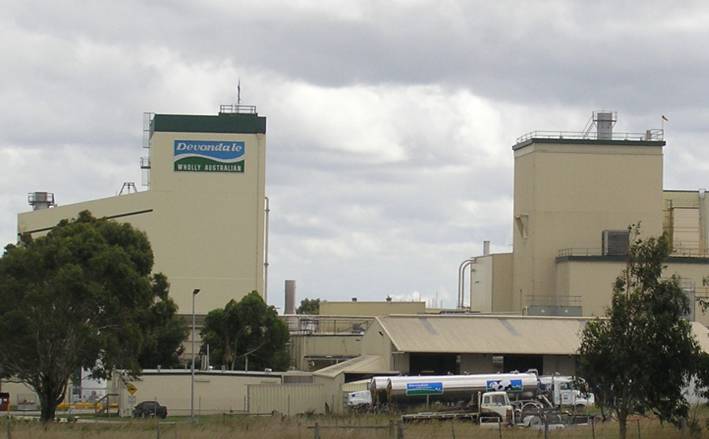 Murray Goulburn's Koroit milk plant will need to be on-sold to a third party within a specific time frame.

The competition watchdog has approved Murray Goulburn's asset sell-off to Canadian dairy giant Saputo, if shareholders agree to the sale on Thursday.

The competition watchdog has approved the sale of Murray Goulburn (MG) to Canadian dairy giant Saputo – with stringent conditions.

Assuming shareholders vote tomorrow to support their board’s recommendation to sell the debt-heavy co-operative’s assets for $1.3 billion, the Australian Competition and Consumer Commission (ACCC) will not oppose the deal.

However, to ensure continuing multi party competition for milk in Victoria’s Western District, the regulatory authority has insisted Saputo Inc must then on-sell MG’s Koroit plant, “within a prescribed timeframe,” to a purchaser approved by the ACCC.

Any sale to Saputo, which already owns the Warrnambool Cheese and Butter plant near Koroit, will also need approval from the Foreign Investment Review Board.

“When approving a new owner of Koroit, we will focus on its ability to be a strong and effective competitor for raw milk in the region,” said ACCC chairman Rod Sims.

He has also sought a binding undertaking from Saputo to supply a guaranteed volume of milk to the prospective purchaser, for a specified time.

The undertaking creates an opportunity for a viable competing milk processor to enter or expand in the local region. - Rod Sims, ACCC

Saputo must also allow farmers who want to transfer their milk to Koroit’s new owner to do so.

The undertaking includes details of transitional milk supply arrangements and independent management for the plant until it is sold.

“The undertaking creates an opportunity for a viable competing milk processor to enter or expand in the local region.”

The ACCC had considered responses from a broad range of market participants about Saputo’s undertaking and the broader transaction.

“We heard from and spoke with many farmers who expressed concerns with the ACCC intervening in this transaction in the short term because they wanted certainty and stability after a bumpy ride with Murray Goulburn,” Mr Sims said.

“I want to assure them our aim is to put in place an outcome that works in their best interest by promoting competition in the medium to longer term while minimising short term uncertainty.”

But farmers continue to express concern about the Koroit sale.

Naringal MG supplier, Hayden Ballinger, couldn’t understand how the sale of Koroit to another processor would work.

“I can see what the ACCC is trying to do, in providing a third processor to make it more competitive for farmers, but I hope it doesn’t weaken that third processor, so they end up unviable,” Mr Ballinger said.

Crossley MG supplier, Karinjeet Singh-Mahil, had concerns about the sale time frame and the future viability of Koroit.

She felt the ACCC did not understand how the dairy industry worked.

“Koroit is part of an integrated system.”

WCB supplier, Chris McKenzie, Timboon, was pleased with the ACCC decision, but felt Saputo should have been able to retain Koroit.

“I think there’s still plenty of competition in the west, regardless,” he said.

There’s a lot of different demand for what milk is being produced in that area - Paul van Heerwaarden, Bega Cheese

One of those potential bidders is Bega Cheese, which was considered a serious contenders in the bid for MG’s assets before Saputo was given the nod by the co-op’s directors.

Chief executive officer, Paul van Heerwaarden, believed a number of companies would be keen to look at Koroit, although he also noted concerns about the plant’s access to enough milk.

“There’s a lot of different demand for what milk is being produced in that area.”

Mr van Heerwaarden would not speculate if Bega was looking to buy the plant in the wake of its recent big $460 million spending spree in the food processing sector, buying Kraft’s Australian spreads and dressings business from Mondelez.

“We’ve been involved in a lot of merger and acquisition activity in the past decade, some of which have come to fruition,” he said.

“We have structures in place and the management ability to absorb another opportunity if something comes up.”

“If the right acquisition is available we’ll put our best foot forward.”

While Bega believed it had built a positive reputation as a milk processor in Victoria and NSW, it was not taking that support for granted or expecting to succeed in any future acquisition pitch.

He also noted Saputo had proven itself to be a “very, very good dairy company” with good farmer support and relationships.

“They’ve been given another big opportunity in Australia and we wish them well with the MG business if this goes through.”