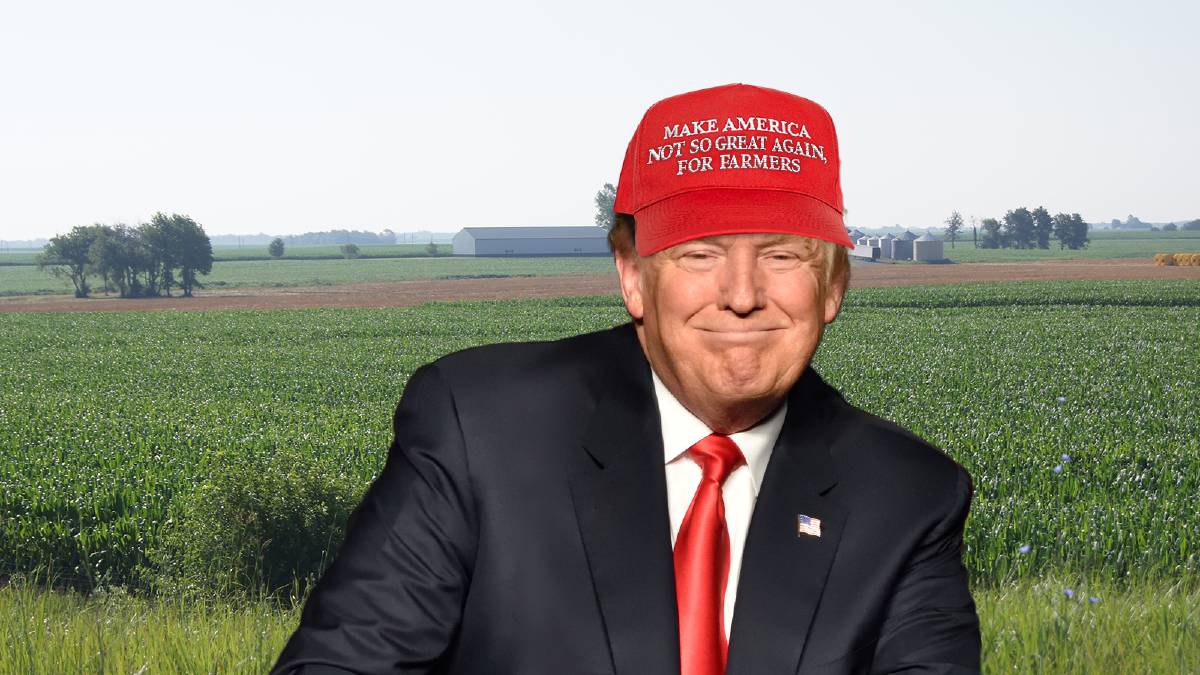 AUSTRALIAN farmers and agribusiness should be looking at moving into position to take advantage of fallout over the escalating trade war between the US and China.

AUSTRALIAN farmers and agribusiness should be looking at moving into position to take advantage of fallout over the escalating trade war between the US and China.

“Commodity markets have been ultra-boring for the past two years,” he said.

Mr Whitelaw provided analysis of various world market impacts including for Australian farmers, after China responded yesterday to Donald Trump firing his lasts shot in an ongoing and expanding trade war by imposing a 25 per cent tariff on various imported Chinese products, valued at about US$46 billion.

In response, Beijing slammed a 25pc tariff on imported US goods, to the tune of US$50b, with a specific focus on American soybeans.

Mr Whitelaw said the question now was; can China actually do it?

He said China had over the past 10 years imported on average 62pc of the world’s global soybean trade while the US had contributed 40pc of that trade, on average.

Mr Whitelaw said to satisfy demand without paying tariffs, China would need to source 100pc of the global soybean trade, taking supply from every other market destination, if they refused to source product from the US and then be able to do that each year.

“This is not like the 60pc tariff on chick peas from India which applies regardless of where the product originates, not just Australia – this is one nation against another and they’re also the two biggest economies in the world.”

Mr Whitelaw said if China moved to purchase most of the non-US crop, then it would leave the rest of the world purchasing soybeans from the US.

But he said China still needed to continue buying soybeans to feed their pig herd and there was no real alternative to soybean meal.

“Tariffs on sorghum would be beneficial to Australia, as we’d continue to be competitive and a primary source of supply, while feed barley would also find flow-on benefits due to its replaceable nature with sorghum,” he said.

But Mr Whitelaw said the Chinese government also hadn’t placed a starting date on the 25pc tariffs announced yesterday, which indicated it may be an initial move to try to “scare” Mr Trump to the negotiating table. 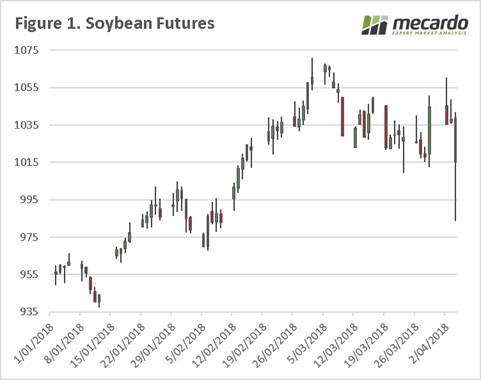 He said the list of products likely to be hit by China’s tariffs could be construed as a “savvy political act” because many of them, like farm commodities such as soybean, would impact the pockets of voters in Trump “strongholds”.

If the tariffs continued for the long run, then Mr Trump would lose favour, if his voters followed a sensible path, he said.

“There is no date on the commencement of the tariffs - they could start at any time,” he said.

“At this time of the year, China doesn’t typically buy much in the say of soybeans, so largely would have little impact until the second half of the year.

“Is this a way of China scaring Trump to the table?”

But Mr Whitelaw said the US China tariff war’s impact had been “quite stark” with immediate changes overnight as the Chicago Board of Trade’s soybean futures contract traded in 58 cents per bushel.

“The introduction of tariffs specifically on US exports has instantly made US soybeans uncompetitive into China and will make it easier for alternate origins to compete like Argentina and Brazil,” he said.

“Overnight the trade scuffle, turned into a trade war with China increasing the number of imports which would attract tariffs after increased rhetoric from the US president.

“Although not wholly unexpected, this trade war can have huge ramifications for global trade.

“The Chinese government were never going to stand back whilst Trump continued to sabre rattle and threaten increased tariffs.”

Mr Whitelaw said Australia exported little to no pork and didn’t have any access into China.

He said Australian pork producers had been “hammered” in the past year by parallel imports from Thailand arriving in Australia via NZ.

But Chinese tariffs on US pork imports could result in US producers dumping pork into Australia, he said.

“It would be good to see our representatives jumping onto this as an opportunity to instigate trade flows into China,” he said while declaring his hand as a pig producer.

But Mr Whitelaw said the Chinese tariff on US farm exports would continue to increase Australia’s competitiveness into China for export products like beef, wine and dairy as the Chinese looked to source product supply from alternative markets.

“The key for me is that whilst the tariff is in place, we should be ensuring that our products become the favoured ones, when the tariffs are eventually lifted,” he said.

“It’s still unwinding and playing out and this won’t be the end of it – we can expect more form the US and China over coming weeks.”

Mr Mathews said US soybean exports to China in 2016 were US$14b, just below Brazil at US$15b, and China’s soybean import dependence was about 90pc.

He said in volume terms, UN Comtrade data showed that total Chinese soybean imports in 2016 was 84.4 million tonnes, of which 38.4m/t was sourced from Brazil and 35.1m/t from the US.

In comparison to the 84.4m/t of soybeans imported in 2016, China imported 3.6m/t of rapeseed or canola that year with virtually all of it sourced from Canada, he said.

“However this has since declined to very small levels given the rise of Australian canola exports to the EU.

“In the future we believe China will re-emerge as an important partner for the Australian canola industry.”

Mr Mathews said the US was also the largest agricultural exporter exporter to China with US$22.3b, followed by Brazil US$19b and Thailand US$7.2b.

National Farmers’ Federation CEO Tony Mahar said it was correct to say that the ramifications of the imposition of tariffs by China on some US farm exports could turn out to be advantageous to certain industries within the Australian farm sector.

“This is a windfall, that is par for the course in the business of exporting,” he said.

“However, other commodities could get caught in the cross fire as US products, that face now face higher tariffs in China, seek a home elsewhere.

“However, we must always remain focussed on the bigger picture and that is the benefits overall for Australian agriculture from increased liberalised trade – i.e. less tariffs not more.

“For this reason, the NFF urges our government to work constructively with both parties and find a way to bring them back to the table at the World Trade Organisation and sort their differences out within the global rules-based system.

“Global trade needs rules - when we abandon them chaos results.”

Mr Mahar said Australia’s farm sector exported about three quarters of what it produced and was amongst the least subsidised farmers in the world.

“We therefore rely on open trade - the imposition of tariffs serves only to curtail open trade and therefore the fortunes of our farm sector,” he said.

“At any one time, Australian farmers are at the mercy of a host of variables such as the growing conditions at home and that of our competitors; the status of the dollar; consumer preferences and world politics.

“Trade and diplomatic machinations between nations are but one of these variables.”