Scott and Anna Fitzgerald on "Warrina" at Tongala in northern Victoria with children Hamish, 4; Amelia, 7: Isla, 5, and William, 1.

He had no intention of returning to the family farm, but Scott Fitzgerald has turned his second career into a fast growing success, based on a dairy holding rented from his retiring parents.

Despite the Victorian dairy industry’s well-publicised challenges in the past five years, the young Fitzgeralds have not just survived dry seasons and the big 2016 farmgate milk price collapse, their enterprise is growing.

Success, to date, has been helped largely by a strategic diversification into fodder production.

We do envisage eventually buying this farm for ourselves, rather than leasing, but not just yet because there are still quite a lot of other spending priorities - Scott Fitzgerald

It continues to help future-proof the family’s expanded commitment to dairying after shifting into the premium-paying A2 milk category 18 months ago. 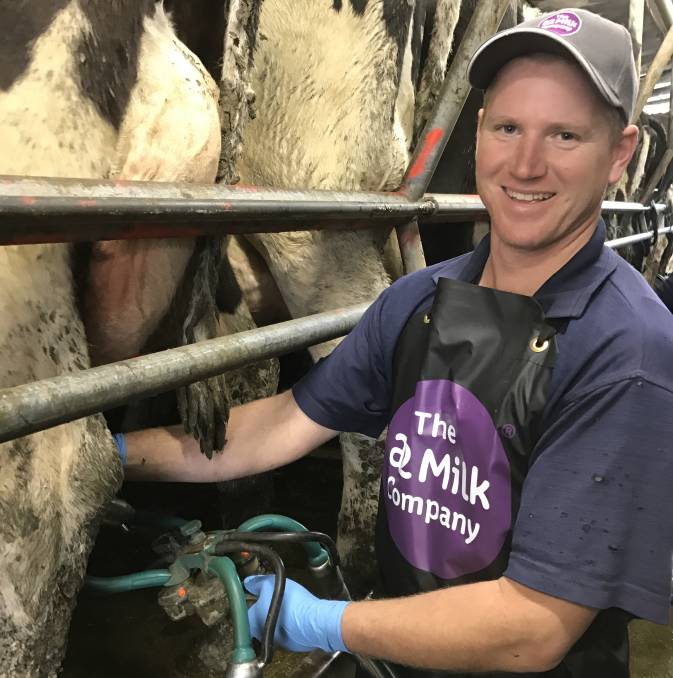 Scott Fitzgerald in the shed at milking time.

“Our relatively short time in farming has taught me to avoid having all our eggs in one basket,” he said.

“Having our own feed bank is a form of income protection.”

What started as a small-scale opportunity to lease a lucerne pasture block near Kyabram in northern Victoria has turned into an important part of the business model for the Fitzgerald’s 2.8 million-litre operation, Warrina Farms, at Tongala.

They now own a 50-hectare block where more cost effective centre pivot irrigation will take over from traditional flood-watered fodder production to help feed a herd expanding to 500 milkers in the next two years.

Other feed support options such as grain growing are longer-term possibilities as the business grows further.

“We’re very conscious that every season is not the same, so we want to eventually have a feed bank to survive a three-year drought,” Mr Fitzgerald said.

A former refrigeration mechanic, he found returning home has turned out far more than just a sensible lifestyle choice for his young family (four children now aged from one to seven).

It provided a chance to make better practical use of his income - and effectively launch a career as something of a dairy business “young gun”.

The Fitzgeralds have built an asset base that would have been unlikely if he had stayed on wages in his old job.

While he grew up knowing plenty about milking cows, Mr Fitzgerald left school with no plans to stay farming.

He took up a trade and worked in Echuca for five years, only to later conclude his peers were “mostly not really going anywhere” with the money they made.

“I was pretty happy in my work, but I woke up one day wanting to be back in the dairy game,” he said.

“Looking around I could see people in farming might start out fairly poor, but they could gather assets and build something along the way.

“Farming seemed an opportunity that went further than just earning a living and paying off a house.”

The timing of his decision was also helpful.

Parents, Peter and Judy, had endured a run of dry seasons and shrinking irrigation water allocations courtesy of the millennium drought and by mid 2007 were considering selling up.

Their farm, originally just 25 hectares and carrying 70 milkers in the 1980s, had trebled in area to run about 300 cows on irrigated perennial pastures.

But as drought bit hard and water allocations dwindled, the herd shrank, too.

Pastures dried off completely and feeding costs consumed most of the milk cheque.

“Mum and Dad did pretty well to make it through without selling their water rights, but they were getting tired,” Mr Fitzgerald said.

He started back initially as a farm hand, graduating later to be a 10 per cent sharefarmer, contributing some machinery to the partnership.

“Unfortunately I still copped a few more droughty years, but it was a good time to really learn about the business and pasture management, and generally understand the amount of planning involved.

I could see people in farming might start out fairly poor, but they can gather assets and build something along the way - Scott Fitzgerald

“There was a lot I realised I didn’t know about running a dairy farm.”

It has provided a forum to compare ideas and management strategies with nearby producers, benchmarking the herd’s performance against others in the district.

“It’s a great way to track our own performance over the years, and keep accountable to your goals,” he said.

Feedback from his dairy network also convinced Mr Fitzgerald to spread his business risks, where possible. 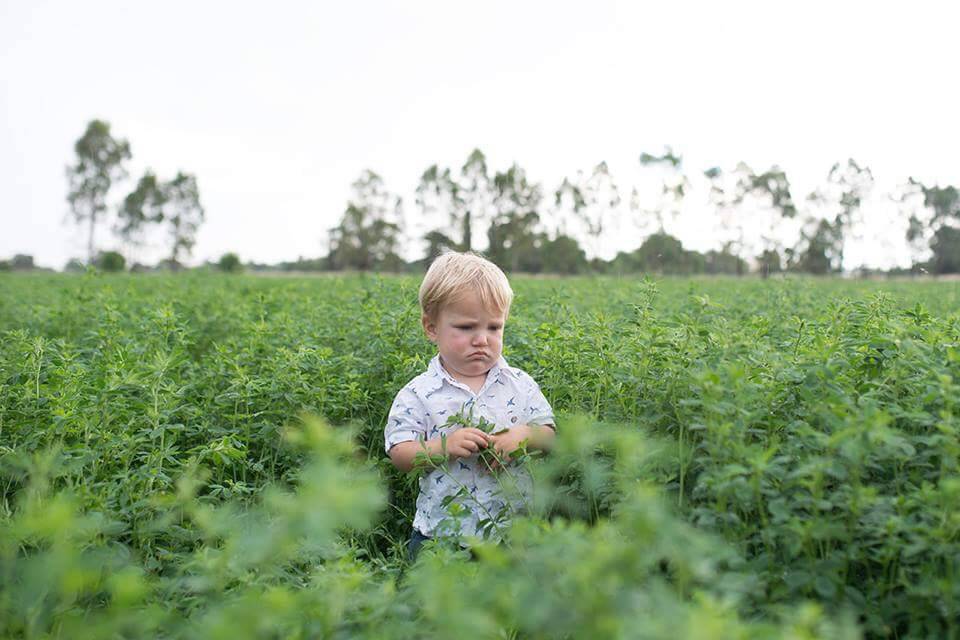 Annual pastures and crops have replaced thirsty perennials as the farm has adapted to the production demands of a spring and autumn calving program and year-round milking introduced in the early 2000s to capture supply premiums.

More recently, stockfeed and irrigation water purchases have been planned a year in advance, helping the farm’s budgeting and (mostly) locking in below spot market values.

About 40pc of the expanding herd’s feed requirement is bought in, much of it as pelletised grain product.

Mr Fitzgerald first started looking outside the farm for feed and income support in 2012 when he approached a farmer 15 kilometres away asking about leasing his 60ha lucerne block.

A year later that block had returned a profit of about $40,000 from hay sales.

“We were a bit lucky – hay was scarce, but water was plentiful and relatively cheap that year,” he said.

The couple then signed a lease-to-buy deal taking over the family herd, using the hay earnings and their savings to kick start the arrangement.

Then they took a five-year lease on the home farm.

That lease has since converted to a 30-year commitment, providing ongoing retirement income for Peter and Judy, while ensuring Scott and Anna don’t need to funnel earnings into buying the farm outright. 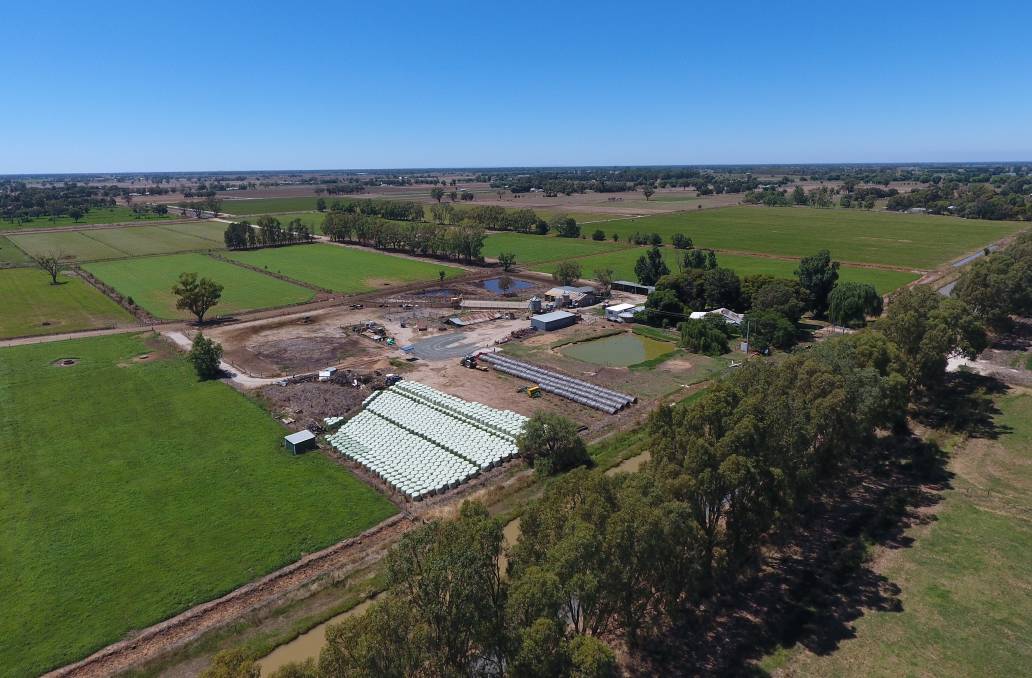 Stored hay on the home farm on "Warrina" at Tongala in northern Victoria.

“Rather than putting all the money we make into buying the home farm we use our funds to grow the business base with other investments,” Scott Fitzgerald said.

Those investments now include a nearby lucerne block to supply the dairy with about 720 tonnes of baled hay and silage a year; a centre pivot irrigator costing $350,000 (including establishment), and a second-hand 300 cow an hour rotary milking platform likely to cost about $550,000 when set up.

The rotary unit will eventually replace the farm’s herringbone parlour, with double the capacity.

In October 2016 the Fitzgeralds also totally replaced their 360-cow herd with cows carrying only the A2 beta-casein milk protein.

After May 2016’s shock farmgate price collapse from $5.60 a kilogram to about $4.30/kg, they quit Murray Goulburn and signed to supply the Mulcahy family’s Kyvalley Dairy Group in Kyabram which packs domestically for A2 Milk Company and exports fresh milk.

“Things are a lot more comfortable for us at the moment, although something else is sure to test us at some point,” Mr Fitzgerald said.

While his focus is now squarely on expanding the herd another 25pc, and keeping it fed with help from the new irrigation block, he said more land or fodder sources would likely be needed after that.

“I don’t envisage another situation like Murray Goulburn (milk price crash) again, but potential setbacks, like another 10-year drought, could arise,” he said.

“I’d hate to be forced to cut back all we’ve built up because we didn’t have a feed security plan to fall back on.

“We do envisage eventually buying this farm for ourselves, rather than leasing, but not just yet because there are still quite a lot of other spending priorities.

“Our growth plans might not be quite as aggressive as in recent years, but I can’t envisage standing still.”

As if juggling his young family’s needs, his busy farming agenda and managing four employees were not enough to keep him challenged, Scott Fitzgerald has also been a keen player in one of dairying’s big industry events.

For the past two years he has served on the organising committee of the Australian Dairy Conference – a 17-year-old independent farmer-led event to inform, educate and inspire participants about dairy’s opportunities and developments. 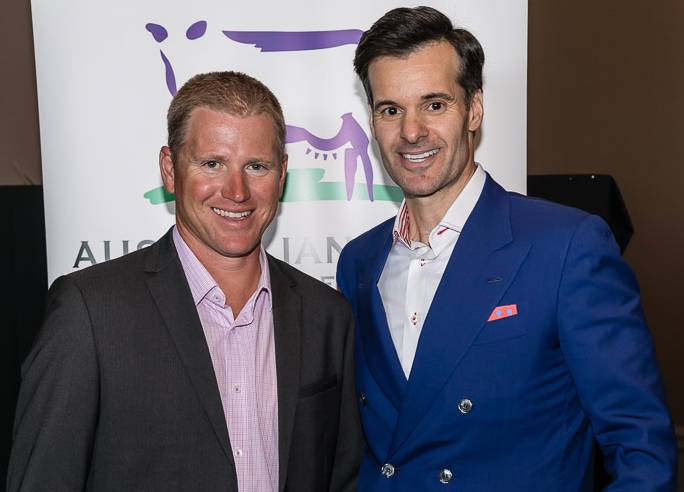 Mr Fitzgerald joined the programing committee for the five-day conference two years ago, chairing the panel ahead of this year’s 500-strong Melbourne forum and field tours in Victoria’s Gippsland in February.

“It’s not something I’d have considered being involved in five years ago – I’m a pretty quiet bloke and this sort of stuff was well out of my comfort zone,” he said.

“But running a farming business has given us a lot of confidence to do things we’d never imagined.

“That reassurance has sort of extended into involvement at an industry level.

At this year’s conference he was also a speaker and forum panelist with other new generation producers making strides in dairying.

“It’s an industry I’m very proud of and very pleased to be part of, so I’m quite happy to help out and be involved in what the dairy conference achieves.

“It’s good that others can gain some value from what we’ve done, too.”

He graduates later this year.