​MORE than 30 animal rights activists are set to face trespass charges in court next month, following a mass raid and pro-vegan protest at a Queensland piggery. 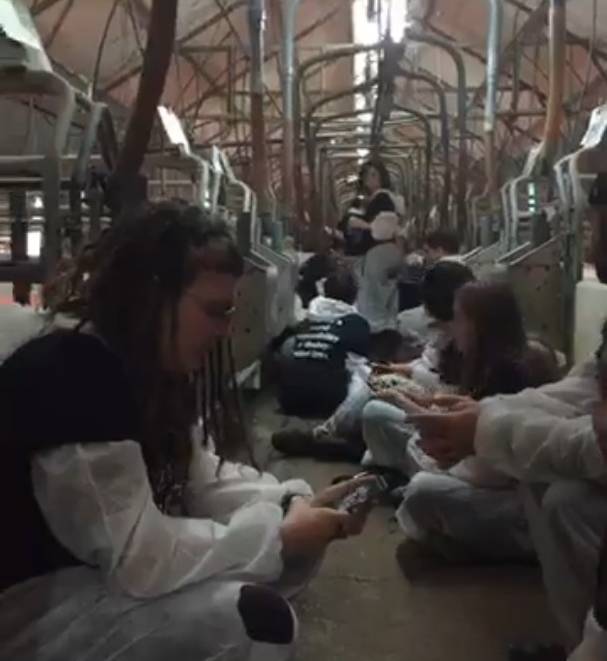 Images taken from inside the farrowing shed at Glasshouse Country Farms where 68 vegan activists staged a protest but raised alarm bells about biosecurity breaches.

MORE than 30 animal rights activists are set to face trespass charges in court next month, following a mass raid and pro-vegan protest at a Queensland piggery.

But rather than defending complaints for breaching the property’s strict biosecurity protocols and endangering animal welfare standards, the protesters have instead subject the farm owner to government investigation and regulatory scrutiny.

Of the 68 activists who staged a sit-in at the farrowing shed a spokesperson from the Beerwah Police Station said more than 30 were arrested on the day and are now due to appear in the Caloundra Magistrates Court between May 2-9, to face trespass charges.

But the spokesperson said no complaints had been received regarding the alleged theft of livestock in relation to the protest - despite claims by some activists since, on social media - or about whether the protest had breached any biosecurity laws, leading to any subsequent investigation.

“No further complaints have been received however should any be received they’ll be investigated promptly,” the spokesperson said.

However, Mr McGuire said there was “merit” in the Queensland Department of Agriculture and Fisheries investigating concerns the activists who broke into his property had breached biosecurity laws.

On the day of the protest, Biosecurity Queensland issued a statement saying “Nobody should enter a livestock operation without proper authorisation and everyone should respect the biosecurity plans and requirements for all livestock enterprises”.

“Entering such premises may represent a risk to animal welfare and biosecurity,” it said.

But in a concerning twist of events, Mr McGuire said the activists lodged a complaint which led to an investigation of his farm property practices - initiated via the RSPCA - by Biosecurity Queensland.

He said a veterinarian and biosecurity officer conducted the examination after the protest, such as measuring the size of the sow pens - but he was confident his production facilities complied with specified standards and there would be no issues.

However, Mr McGuire said the veterinarian instructed him to monitor the health of his pig herd, following the biosecurity breach, and report back on any changes.

He said he was concerned about different strains of E.Coli impacting the health of his pigs, which can cause sudden death, due to the activists transferring diseases onto his property.

“This is a very big risk because the activists can introduce disease if they have been in contact with other animals; we just don’t know where they’ve been,” he said.

Biosecurity Queensland said it was looking into complaints made about the premises in question - but could not make any public statements, given it was an active investigation.

Australian Pork Limited (APL) Policy General Manager Deb Kerr said her organisation had now advised pork producers to be on the alert for the “new tactics” of animal rights activists and had also discussed the biosecurity concerns relating to the break-in at Mr McGuire’s farm with government.

Ms Kerr said the activists believed that dressing up in costumes - that appeared to be protective clothing - would prevent biosecurity issues or potential disease transfer, but it doesn’t.

On the day of the protest, APL issued a media statement saying “Our immediate priority is the welfare of the pigs”.

“Anyone entering a pig farm without completing the relevant biosecurity protocols puts the health of the animals at risk,” it said.

Video footage of the protest posted on social media showed police warning the activists inside the farrowing shed about the potential consequences of their actions.

“If you fail to leave you will be arrested for trespass – you can get a criminal history for this – it can affect your future employment opportunities,” a police officer says.

Half of the protesters left the farrowing shed voluntarily amid the police warning to avoid possible criminal convictions - but some of the remaining protesters took objection to the division.

“We’re here to disobey the law that is inflicting this upon these victims,” a female activist is heard shouting.

“Pigs should not take the rap for all of us.”

The activist said the t-shirts the protesters wore - which said ‘One has a moral obligation to disobey unjust laws’ - were assigned to the protesters at a dinner held the night before so they could “disobey the law”. 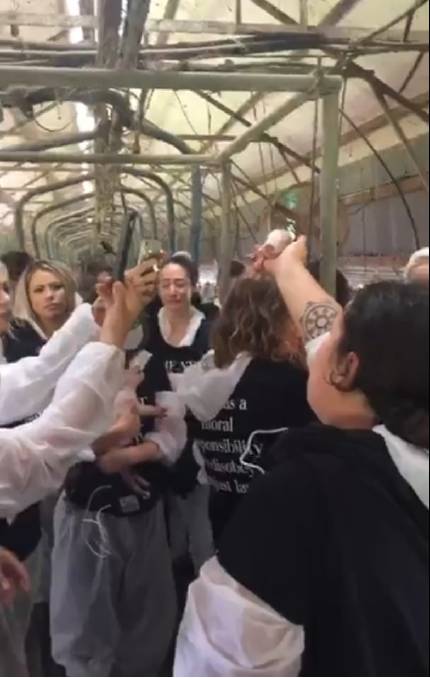 That warning to the dissenting protesters then ignites clapping and cheering while another one of the animal rights activists, says “f…. them”.

“Oooh, Seven News responded to me,” another activist is heard saying.

Another one can be heard saying - in one of the video clips that has proliferated on social media amid the protest taken at Mr McGuire’s farm, along with photographs - that the piggery workers or police would be “shocked” and “freak out” once they saw the amount of protesters, inside the facility.

A Facebook page ‘Movement 34’ was set up in response to the raid on Mr McGuire’s farm and calling on protesters to attend the court hearing on May 2, to “support your fellow activists and let’s keep fighting for animal liberation together”.

“This page is to follow the court case of the 34 activists charged with trespassing after the 'Meat the Victims' action.”

Mr McGuire believes the mass protest was also a form of “retribution” for an incident in December where two activists were charged with theft and trespass given some were involved in both incidents.

Security is now set to be enhanced to defend the farm business from escalating raids that he says are deliberately timed to coincide with publicity seeking linked to more screenings later this month in Queensland of an amateur vegan documentary.

He has called for on-the-spot fines of up to $5000 or imprisonment for activists caught trespassing on farming facilities, believing current laws are inadequate to deter such protest activity.

The Federal Agriculture and Water Resources Department’s website says a highly pathogenic avian influenza outbreak in Australia would have “devastating effects on Australia’s poultry meat and egg industries, which contribute enormously to the Australian economy”.

It cited the example from 2003 in the Netherlands where over 30 million birds were culled to eradicate the disease, costing $252 million.

The two activists - Katerina Alshanova and Joshy Kwon - have posted on social media seeking financial support to defend charges relating to their court appearance over the matter in December, relating to Mr McGuire’s property.

“We are desperately asking the public and vegan community for help,” a post says that also links to the crowd funding page that had raised more than $7700 in seeking a goal of $8500, as of Tuesday.

“We have been charged with indictable offences.

“The maximum penalty for each of the charges we face is 14 years imprisonment.

“We are both dedicated activists who are extremely passionate about helping the animals and raising awareness of their mistreatment.

“Earlier this year a crowdfunding campaign raised $8250 toward legal costs - nearly all of those funds were needed to pay the legal costs of a co-defendant who faces the same charges as us, and whose lawyer needed to be paid up front before taking the case.

“In the meantime, our lawyer has been patient with us, but we are running out of time to pay the remaining costs of preparation for trial - so we’re now desperately seeking to raise the rest of the funds needed for our legal defences.

“If there are any excess funds raised by this campaign (after payment of our legal costs) then those funds will be donated to Animal Liberation Queensland (this will also occur if we are found “not guilty” and police are ordered to pay some/all of our legal costs).”

It also linked to an ABC report saying Beerwah Police Officer-in-Charge Senior Sergeant Kim Cavell had stated the police became aware of the alleged theft after the pig farmer saw posts on a Facebook page - that included photographs - of one of the suspects dressed in black with a balaclava ‘rehoming’ the pig he owned.

“He was able to identify his pig farm and a neighbouring farm and as a result this led to a complaint to police and the investigation,” the report said in quoting the police officer.

Media training for animal rights and vegan activists has also been shared online, along with mental health warnings for those who have attended recent protest events held throughout the nation, to coincide with the documentary screening in various locations.