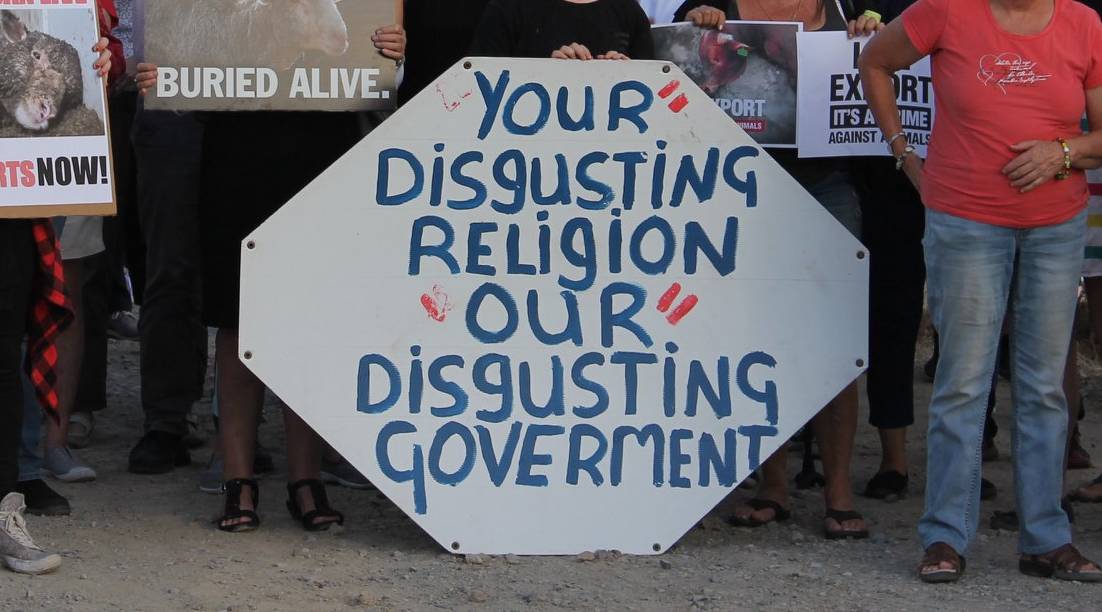 ISLAMOPHOBIC comment on a placard brandished at an anti-live exports rally in Adelaide has been condemned as ‘divisive’.

ISLAMOPHOBIC comment on a placard brandished at an anti-live exports rally in Adelaide has been condemned as ‘divisive’ by the Australia Arab Chamber of Commerce and Industry (AACCI).

The placard which said ‘your disgusting religion – our disgusting government’ has appeared on social media and in television reporting on the ban live exports protest that was held in Adelaide last Friday.

The event was timed to coincide with the arrival of an export vessel operated by Livestock Shipping Services which anti-live exports campaigners are targeting to expose their fears about the sheep trade continuing during the Middle Eastern summer.

“We are calling on the government and all authorities to stop the export of animals in the Australian winter months heading into vicious summer heat,” an advertisement for the protest said, on Facebook.

The campaign event was ignited off the back of the public and political pressure created by the broadcast of video images on 60 Minutes supplied to the media outlet by Animals Australia showing issues with heat stress related mortalities for sheep, on a 2017 shipment to the Middle East.

That supply of sheep mostly from WA to the Middle East during that time-frame is driven by peak demand related to the Muslim religious Festival of Sacrifice.

He backed the rally’s organisers, issuing an apology and said it was unreasonable to be “opportunistic and resort to these divisive messages which really have no place in Australia”.

“We’re a very diverse and multi-cultural society and we’re very successful in that,” he said.

“I think anything like that, singling out or directing such messages which are relevant to a specific sector of our community, are really very divisive and there should be no such place for such messages in a nation like ours.”

The organisers of the Adelaide Live Export Protest have been contacted for comment.

Mr Jabbour said it was unfortunate that such messaging would be used in relation to the issue of live exports which was “unrelated to religion”.

“It’s disappointing that the media would basically disseminate or communicate such a message – it’s a negative approach,” he said.

“Animal welfare is an important issue – but it’s not a religious issue – and I don’t think we should view it from this perspective.

“This is not a religious matter and we don’t export livestock only to the Middle East and Islam is not confined to the Middle East either so I don’t know that this is really relevant and it’s unfortunate that such messages would be used in this context.”

“Misinformation and the distractions that we’re often exposed to, often work towards forming a negative perception of the region that is not really based on accurate information or a sophisticated understanding of the region,” he said.

“We’re doing close to $15 billion worth of trade with the Arab region and this is a very important area of our economy and trade obviously contributes to prosperity so it’s important for us to view these issues objectively and calmly and not to resort to knee jerk reactions and biased comments.”

Mr Jabbour said the current issue concerning live sheep exports was coinciding with Eid events in many parts of the Islamic world and the religious festival of sacrifice wasn’t only confined to the Middle East region.

“But I think there are two entirely separate issues here and I don’t think we should really be referring to religion when we’re dealing with livestock exports,” he said.

“This is a trade issue and an animal welfare issue and I think that’s where the focus needs to be.

“We need to address those legitimate concerns about the welfare of animals and the treatment of animals during the transition process.

“This is important and this is essential and this is well in line with our values as a nation.

“We pride ourselves on the high quality of our product and the way we deal with these matters; hence why it is very important for us to be serious and take all of the necessary steps to address the concerns expressed in terms of animal welfare.

“But we should be in a position to reconcile that while maintaining an important part of our export sector.”

Mr Jabbour said a trade ban was “definitely not” the solution and “not a sensible thing to do”.

“If there are issues then we should be good enough to address them and deal with them,” he said.

“Banning is not an approach that’s constructive – we should be more than capable of dealing with those issues and challenges and put in place the necessary guidelines and criteria to ensure we do this professionally and with the highest quality possible.

“We should be dealing with this calmly and objectively to try to address the concerns and there’s no doubt that the issue of the welfare of animals needs to be addressed but I’m confident we can do that.

“I think we should be able to reconcile both objectives and that is to address the concerns relating to the humane treatment of livestock for export to any country - not only to the Middle East region - but at the same time ensure the viability of this particular sector of our exports and the interests of our farmers.

“Any knee jerk reaction or trying to basically point it in another direction is unfortunate.”

A comment on the Adelaide Live Export Protest page said “Next time you should tell people what they can and can’t have on their (signs) - I found it terrible how the situation was handled”.

The protest event was attended by Australian Greens trade spokesperson Senator Sarah Hanson-Young who has backed a ban on live exports, saying in a media statement promoting the event that it was “an emotional issue”.

In her media release last week she said “South Australians have a long history of standing up against the cruel live animal trade and I’m proud to stand with them again as we continue to fight for an end to this cruel practice”.

Dr Jneid said the demand for live animals for religious festivals in no way leads to the mistreatment of animals.

He said the treatment of animals being exported was for the Australian government to manage and regulate.

“These are matters of trade regulation and have nothing to do with Islam or our religious festivals,” President of the peak body for Australian Muslims said.

“The Australian government should work with the importing countries to put in place measures and regulations for the proper and humane treatment of all live export animals.”