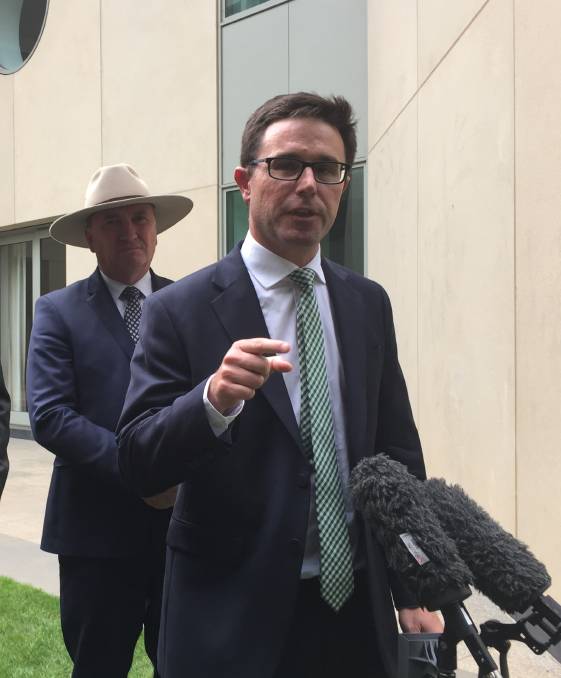 Agriculture and Water Resources Minister David Littleproud says that’s but one potential outcome that could be delivered via the multiple regulatory responses triggered by recent media exposure of animal welfare issues in the live export industry.

And Mr Littleproud says his Department is also examining “frame by frame” the controversial video footage - taken by a ship crewman turned whistle-blower and given to 60 Minutes via animal rights group Animals Australia in a secretive broadcast deal - of issues concerning sheep heat stress related mortalities; largely from one voyage to the Middle East in 2017.

“I’m looking at a number of measures now but don’t want to pre-empt anything,” Mr Littleproud told Fairfax Agricultural Media of the government’s reaction.

“We have a short sharp review into the northern summer trade but we’re also working with industry and animal rights groups around giving that truth in proof on the boat; that’s what we’re looking for.

“And that may include not only CCTV monitoring but it could also include adding a government official observer on those boats.

“That’s what I’m working through now and I want to do that in a calm, methodical and sensible way that looks at giving confidence to that truth and proof of the process, of the supply chain, all the way through.

“If that’s where we need to get to then that’s an investment in our Australian primary production systems that I’m prepared to make.

“But I’m not going to rush into anything without having the science and to be able to do it in a responsible way.”

In 2017, Australia exported about 2 million live sheep valued at $249 million which saw a mortality rate of 0.7 per cent – in other words a 99.3pc non-mortality rate.

But Mr Littleproud said the cost of any regulatory enhancements would be worn by the exporting companies, which some industry sources say may well end up coming out of producers’ pockets.

That cost-shift is despite the public demanding tougher welfare standards in response to the 60 Minutes broadcast, when mortality rates for sheep exports have been trending downwards in recent times and if Australia banned trade during certain periods or altogether, countries with no welfare laws beyond legal ownership would simply fill the supply void to markets like the Middle East.

Mr Littleproud said the government would put their own independent observer on board shipments and the exporter would then be billed for that observer’s time on the boat.

But he said that potential process would be “at arm’s length” of industry despite the billing requirement.

“At the moment the exporter hires the vet and so this would give another truth in proof (by having) another government observer,” he said.

“I haven’t committed to anything yet - I’m exploring options - and I’ll also reach out to the Opposition to give them the respect of knowing where I’m going as well.

“I’m also looking at penalties in terms of how we can strengthen those and making sure we get that right.

“This review will also look at standards and whether they need to be improved around ventilation, air conditioning and stocking density.”

Asked about the public’s rush to judgment when video footage is presented to media outlets by activists groups with long-running campaign agendas to ban the trade, Mr Littleproud conceded any evidence should by properly tested which was now part of his Department’s re-investigation process for the shipment central to the recent issue.

“They have footage of five voyages and they’re going through that frame by frame to ascertain if there have been breaches of the standards,” he said.

“Quite frankly, if that footage, from what I saw, hasn’t breached the standards well quite candidly, I don’t think the standards are good enough.

“But I need to let the Department undertake that investigation and then if they find as such, that the standards have been breached, then they’ll make prosecutions and they need to be given the time to do that.

“We’re a fair nation and the allegations against this exporter should be aired with responsibility so they’re given their fair day as well.

“That needs to happen as quickly as we can but also to make sure we don’t miss anything and then we can give confidence to the community about what has happened here.

“And that’s why I’ve also instigated a review into the regulator themselves”.

Mr Littleproud said “no one is beyond reproach on this”.

“The fact that I received a report before Easter to say ‘no standards were breached’, I actually had concerns about that, even before I saw any footage,” he said.

“I asked for a brief on their actions around that report and if they believed they’d done it thoroughly enough.

“But subsequently, having seen that vision, it raised enough concerns for me to call for that review about the regulator’s skills, the tools that we’ve given them and their culture.

“The sun needs to shine in on this and we need to give confidence to the community because this industry is very important to the nation.”

Mr Littleproud said up to 500 frames of vision would be examined as part of the Department’s re-investigation, which would address issues like whether the sheep were of Australian origin.

“It’s a fair and open process and I thank Animals Australia for sending it to me,” he said.

“We’ve got to create an environment where…anyone who has treated an animal cruelly needs to be called out.

“We need to create an environment where not just Animals Australia but anybody can come forward and say ‘something’s wrong’ because if we get that, we get integrity back into the system.”

It’s understood almost all of the video footage being investigated by the Department was taken from one consignment last year by Emanuel Exports for 63,804 sheep loaded in WA that suffered 2400 mortalities.

That mortality rate of that shipment represented almost double the 2 per cent threshold accepted within the current regulatory reporting limit prescribed by the Australian Standards for the Export of Livestock (ASEL).

However, it was investigated by the Department and the Australian Maritime Safety Authority which both cleared Emanuel Exports of any wrongdoing.

Despite those outcomes, subsequent added welfare measures have been implemented for other shipments, like a 17.5 per cent reduced stocking rate.

LiveCorp’s 2017 research update report shows work is underway into enhancing animal welfare indicators in the live exports supply chain with a pilot program that has a life-cycle budget of more than $720,000, starting in July 2017 and running to May 2021.

That process could provide the capacity to enhance feedback on welfare outcomes to the Department, beyond the basic mortality numbers like the 2pc reporting threshold.

Outcomes of that research could also dovetail into the review of ASEL that’s currently underway and the government’s response.

A report handed down in 2013 from the most recent ASEL review said the Committee didn’t reach agreement on whether the reportable mortality rates should be reduced or not.

It said all members noted that mortality rates had been incrementally improving since ASEL was introduced - in 2004 following the MV Cormo Express controversy the year before.

And the reportable mortality rates originally introduced are much higher than average mortalities currently experienced, the report said.

“There was discussion over whether triggering additional investigations by reducing the reportable mortality rate would reduce mortalities and whether such investigations would be able to identify what factors led to the high mortality level and, where possible, recommend mitigation strategies,” it said.

The report also said the Committee that included animal welfare advocates, live export industry and government representatives reached no agreement on whether the current stocking densities were appropriate or should be changed.

“The Steering Committee was provided with detailed papers and research on the topic, recommending both the status quo and reduced stocking densities,” it said.

“The Steering Committee considered, but did not agree on, increasing the extra space allowance for pregnant animals.”

The report also took into consideration findings of the 2011 Farmer Review of live exports that was triggered by the Indonesian live cattle ban crisis and led to the implementation of the Exporter Supply Chain Assurance Scheme that covers in-market animal welfare standards, for exported Australian live-stock.

The Farmer report found that ASEL needed to “continue to evolve”, in relation to persistent issues like mortality in sheep exported from southern ports in winter months and the results of scientific research.

The Farmer Review recommended a comprehensive review of ASEL be undertaken to examine the policy on export of sheep from southern ports to the Middle East in winter months, with a view to: mitigate feedlot and shipboard losses in adverse weather conditions; and mitigate losses from heat stress and inanition during the voyage.

But the ASEL review Steering Committee said there was a lack of consensus to make any substantial revisions to the related standards – but agreed to a standard specifying that fodder must be provided in troughs to livestock at the registered premises, and not from the floor/ground.

“It was identified that the provision of adequate shelter at registered premises would be useful in mitigating losses, however the standards currently already state the need for shelter or other appropriate protection,” the report said.

“In the absence of additional specific research, the Steering Committee was unable to identify new standards to address this issue.”