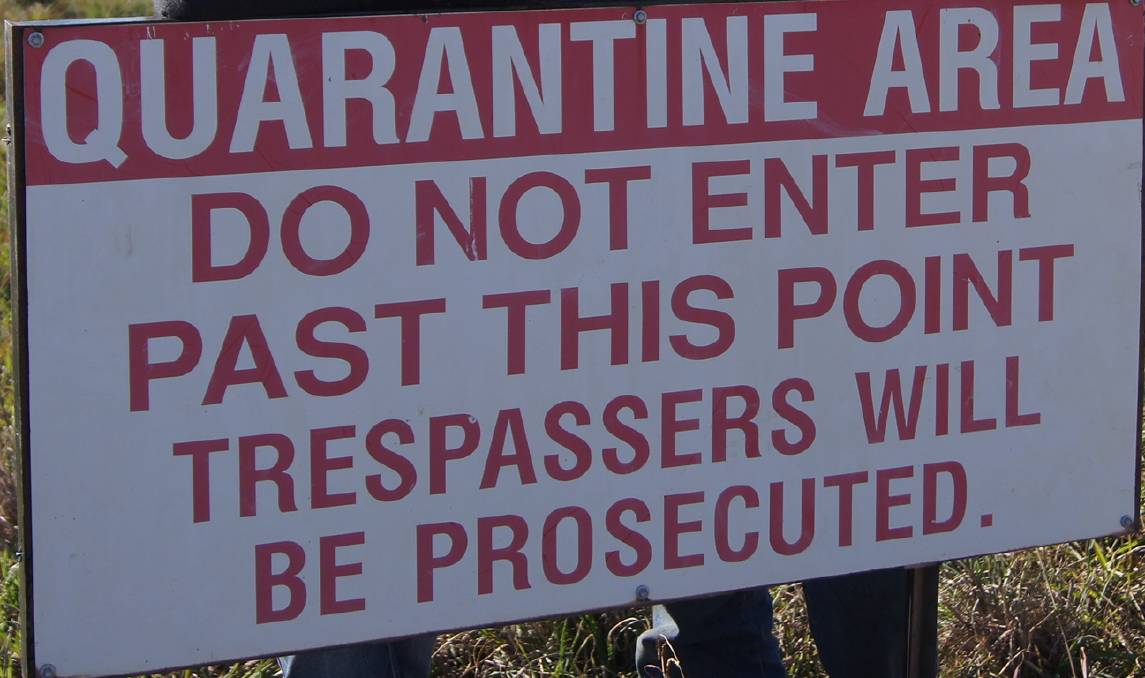 ANIMAL rights activists that broke into a Queensland piggery last month may still be facing charges for breaching biosecurity protocols.

ANIMAL rights activists that broke into a Queensland piggery in a mass protest as part of a broader nation-wide campaign to promote a pro-vegan film have appeared in court this week to face trespassing charges.

But it’s unclear whether they’ll be hit with further charges for breaching farm biosecurity laws, in risking the potential death of pigs and causing wide-spread harm to other animals, with an active investigation by concerned authorities still underway.

After 68 activists broke into a farrowing shed at Gary McGuire’s property on the Queensland Sunshine Coast, Glasshouse Country Farms, in an early morning raid on April 6, police charged 34 of them with trespass.

Yesterday, 15 of the activists appeared in the Caloundra Magistrates Court over the matter with others due to have their matters heard in coming days.

But Mr McGuire and Australian Pork Limited have also raised serious concerns about the biosecurity risks caused to his livestock and farming facilities, by the 68 activists deliberately ignoring warning signs and failing to adhere to strict farm security clearance protocols.

He believes the activists entered the farrowing shed to try to attract media attention as part of a broader promotional campaign that’s aiming to promote a pro-vegan film by animal rights crusader Chris Delforce.

Mr Delforce has pledged to try to end all livestock farming practices and had charges dismissed on a technicality last year in a NSW court that were laid over alleged offences relating to covert filming on farms over an extended period of time, under the NSW Surveillance Devices Act.

Mr McGuire has raised fears about repeat attacks on his property by activists – with two charged with trespass and theft from another incident last December and due to face court in June – with some of the pro-vegan protesters having travelled from interstate or unknown destinations but potentially carrying diseases and risks due to crossing-over from other facilities, like a neighbouring poultry farm.

A Biosecurity Queensland spokesperson said there was an ongoing investigation into the piggery break in from last month and could not comment on whether any of the 68 activists had also been charged with any breach of biosecurity laws, not just trespass, on Mr McGuire’s property.

“As stated previously, nobody should enter a livestock operation without proper authorisation, and everyone should respect the biosecurity plans and requirements of all livestock enterprises,” the spokesperson said.

“Entering such premises can pose a risk to animal welfare and biosecurity.

“While this current investigation is ongoing, Biosecurity Queensland can make no further public comment.”

Mr McGuire also declined to comment further but has previously raised concerns about the significant threat of biosecurity outbreaks from the activist activity and its impact on animal welfare – but the lack of penalty for trespassing, as a deterrent.

He also believes the protest sit-in was a form of “retribution” for the December raid on his farm, given some of the activists involved had re-offended.

Concerns were also raised about the treatment of farm workers by the animal rights activists and the protest activity interrupting professional farming operations and animal welfare management.

“They have extreme views and they could be capable of other extreme acts - it only takes one,” Mr McGuire said after the protest last month where 40 other activists also gathered outside the farrowing shed, in coveting media attention and posting film and images to social media.

“It is something really that borders on terrorism and terror tactics.

“My workers are probably now fearful of what they are going to encounter when they go to work because the sheds are right next to where they live.

“It was pretty much like a home invasion because the manager lives about forty metres away from the piggery and there’s another staff member who lives right to there and they attend to the pigs at night time.”

Mr McGuire has also urged consideration of on-the-spot $5000 fines or imprisonment to be imposed on animal rights activists caught trespassing on farm facilities, due to the inadequacy of current rules. 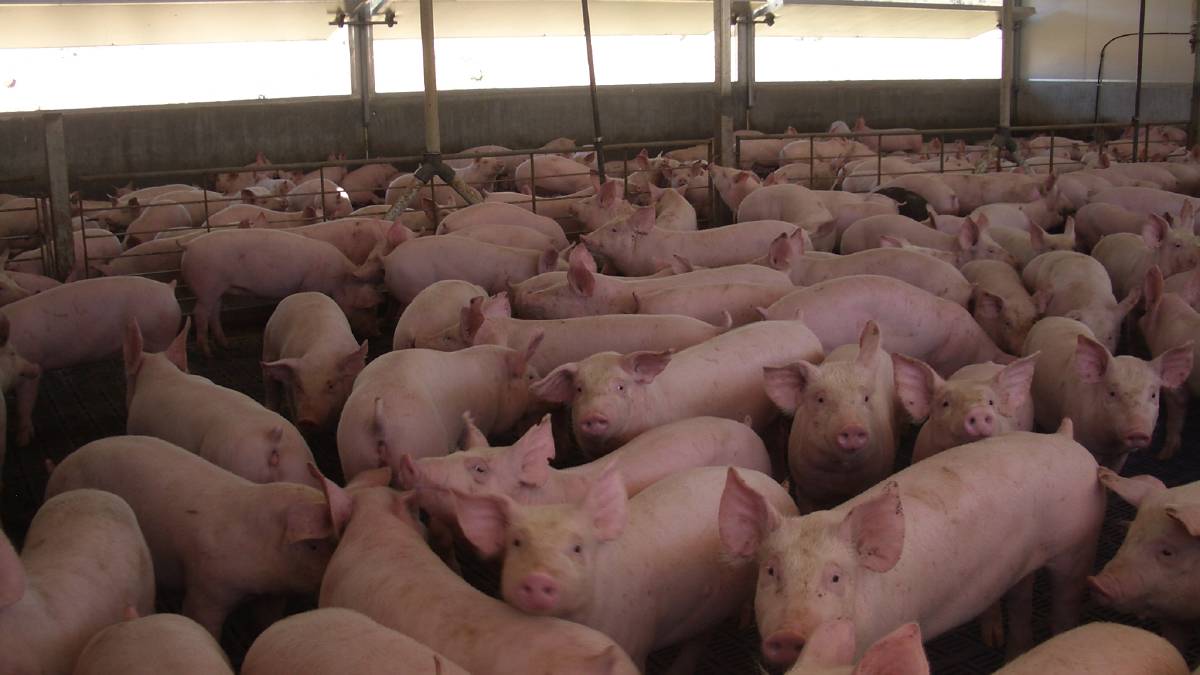 He fears the animal rights activists may return via a neighbouring poultry business, with screenings of the pro-vegan documentary continuing in Queensland, and that inter-farm activity risks the transfer of potentially crippling diseases like Avian Influenza (bird flu).

“I don’t think they comprehend what they can cause by transmitting a disease,” he said of the activists’ trespassing.

“We don’t allow any other live animals onto the farm and we don’t allow people who have been in contact with other animals.

“That is part of our Quality Assurance program and biosecurity standards, to keep disease out of the piggery.

“We’ve had disease before and it cost us hundreds of thousands of dollars and a lot of suffering for the pigs and the people looking after them, until we eradicated those diseases at great expense and we just don’t want it back.

“This is a very big risk because the (activists) can introduce disease if they have been in contact with other animals – we just don’t know where they’ve been.”

When asked about the potential costs and damages of a biosecurity outbreak, Invasive Species Council CEO Andrew Cox referred to a 2013 report by the Australian Bureau of Agricultural Resource Economics and Sciences (ABARES).

The report says in the event of a large multi‐state Foot and Mouth Disease (FMD) outbreak, ABARES estimates there’d be revenue losses of between $49.3 billion and $51.8b over 10 years.

The revenue losses account for around 99 per cent of direct economic costs, with the remaining 1pc being the cost of disease control, it says.

ABARES said the cost of control increased with the size of a biosecurity outbreak because more animals must be managed.

Control costs are estimated at between $60 million and $373m, with $6.3m to $60.2m required in compensation for animals destroyed during control procedures, the report said.

But Mr Cox said the ABARES report also referred to the scenario for small FMD outbreaks in Queensland and Victoria.

It says assuming that export markets would lift bans on Australian product quickly, modelling predicted there would be revenue losses of between $5.6b and $6.2b over 10 years, depending on the response strategy used.

But Mr Cox said there were also some upsides and the ABARES report says some industries that are competitors in production - like grain and horticulture and their downstream processors - are likely to benefit, with an estimated increase in the present net value of production of $15b over 10 years, compared with no FMD outbreak.

These increases are the result of resources such as land being diverted from livestock to other agricultural uses, which covers cattle and pigs.

In other words, a biosecurity outbreak would be devastating for families that rely on livestock farming but benefit those that are involved in plant based production.

Another report from a comprehensive review of the nation’s biosecurity system was handed to state and federal Agriculture Ministers last year and made 42 reform recommendations, as it warned about cost-cutting risks by governments.

It also warned about current global and future biosecurity trends and risks which included increased agricultural expansion and intensification. “The trend towards fewer, larger and often more concentrated farms may mean that outbreaks will have greater consequences for the owner of the farm and the markets supplied by the farm,” it said.

Changing consumer expectations, covering the significant growth in products such as free-range meat and eggs and an increase in organic farming, were also listed as current global and future biosecurity risks.

But declining government resources was identified as a financial threat that needed to be addressed.

The report cited an example from an August 2015 report by the Victorian Auditor-General which found that funding for core livestock biosecurity activities in Victoria had decreased by 49pc over the last five years.

“This has weakened Victoria’s capacity to detect, prepare for and respond to emergency animal disease outbreaks, which can have devastating economic impacts,” it said.

It said a Queensland biosecurity capability review found that the increasing number, scale and scope of exotic pests and disease threats would be likely to exceed Biosecurity Queensland’s resources and capacity.

“Other jurisdictions have reported similar reductions in resourcing and identified associated increases in risk,” it said.

The report also compared biosecurity to natural disaster saying “it is wiser to spend money on prevention and mitigation measures in advance of an adverse event occurring rather than on recovery and rectification but that in most cases this does not happen”.

“Investment in prevention and mitigation is more readily accepted and hence more common in areas such as human health (for example, breast and bowel cancer screening programs) than in natural disasters or biosecurity,” it said.

“Failure to invest in health prevention and mitigation would be regarded by many as unacceptable.

“These views were confirmed by the 2015–16 national stocktake of biosecurity investment, which revealed that approximately 63pc of state and territory investment is directed at areas where the return is generally lower - that is, established pests and diseases.

“Benefits to farmers, industry and the community would flow if the current expenditure profile of the state and territory jurisdictions could be reformed to align more closely with agreed national biosecurity priorities.”

The report said for biosecurity, incursion responses and management are, in the most part, unallocated in government budgets.

“The costs for the equine influenza response were over $342m while the response to red imported fire ants has cost $340m so far, with a further $380m likely to be committed over the next 10 years,” it said.

“It is worth noting in this context that a major incursion has the potential to massively impact on the economy, with costs much broader than direct eradication costs.

“For example, ABARES has estimated that a large-scale foot-and-mouth disease outbreak would cost Australia in the region of $50b over 10 years.

“Unless there is greater investment in prevention, early detection and eradication activities then major response and management costs can be expected to increase in the future, placing a growing and unpredictable burden on government budgets and potentially leading to choices having to be made between eradication efforts to be funded even where the cost–benefit outcomes are clear.”