TWO of the nation’s leading wine-makers have cautioned Australian wine consumers about an upward spike in domestic prices due to expanded Chinese demand. 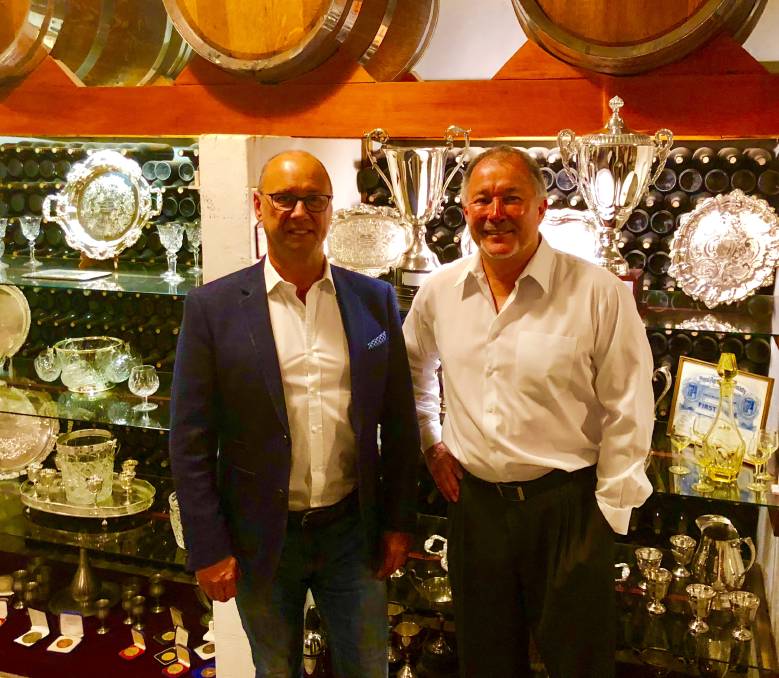 TWO of the nation’s leading wine-makers have cautioned Australian wine consumers about an upward spike in domestic prices that could last a decade and a half due to an unprecedented export boom driven by the rapidly expanding Chinese market.

Mr Randall said the change in supply and demand being largely driven by China’s rapidly growing appetite for Australian wine was causing “a market correction but it’s taken a lot longer than most people thought”.

But he said that improved shelf pricing meant wine producers would gain a lot more confidence about investing in their industry’s future after a long-running slump.

“If you’re grape grower or wine maker or both, it gives you more confidence in the industry to expand and go and plant some more vineyards rather than say ‘I don’t want to take the risk. I’m hardly making any margin now and I’m not going to pull out the vineyards I’ve got but I’m not going to be aggressive and expand my businesses’,” he said.

“I think that’s important for Australian viticulture as well.

“We’re currently the sixth largest wine producer in the world and we oscillate between six and seven depending on the size of our crop and the size of Argentina’s.

“In the last 15 years Argentina has caught up because their exchange rates and labour rates are clearly better than ours – but we’re still the fourth largest wine exporter in the world.

“We’re significant on the global wine-scape now and we should always attempt to be more significant but this Chinese opportunity is singularly the greatest opportunity the Australian wine industry has known in 180 years.”

Mr Edwards said the increasing export demand for the supply for Australian premium wines would “obviously” put some tension on price points and availability for Australian consumers throughout the consolidated retail chain.

He said given that about 76 per cent of trade in the retail chain was owned by Coles and Woolworths, they are now likely to face cost and pricing pressures due to that offshore demand.

“For Australian consumers who have enjoyed some very, very inexpensive great Australian wine for an extended period of time - probably 15-years - they might now start to struggle to receive their favourite wines in the volumes that they’ve seen in the past,” he said.

“And maybe there will be some upward price pressure come to bear in the market place by virtue of what is seemingly a demand pull from another market.

“The problem for Coles and Woolworths specifically, if you look at their business model, is that they’ve been up as high 40pc with their home brands products that they’ve created to stock in their stores.

“But they’re unlikely to be able to access the volumes of wine at that price-point, at the same quality, to be able to continue with that business model, in the medium term.”

Mr Randall said there was a historic precedent that reflected the current supply and demand and pricing cycle for Australia’s wine industry.

He said in the 1990’s Australian wine exports were experiencing compound growth of about 20pc driven by demand form the UK and US export markets, when Australia also had the same sized wine grape crop of about 2 million tonnes.

However, in 25 years Australia’s wine crop hasn’t increased and “we’ve just struggled to sell it over the last 15 years”, he said.

“The consumer has basically had 15 years of outstanding ability to buy world class wines, incredibly cheaply, especially through the two major supermarket chains,” he said.

“So 15 years of consumers’ times is about to swing back to wine-makers’ times when there is demand for our produce now, especially from the new market of China and there’s no doubt there’ll be a reduction in availability for domestic sales.”

Mr Randall also pointed to an extended history of the Australian wine industry as a key performance indicator which also impacted his positive view of the current price cycle.

“But then of course we went into over-zealous plantings and over–supply, accelerated by direct depreciation assistance from the federal government which was welcomed but abused.

“Since then we’ve had 15 years of what I’ve called a double down negative cycle.

“Usually it lasts about seven years in an agri-cycle and certainly in a wine industry cycle but we had a double down cycle and during that period of time the supermarkets saw their greatest strength in the vulnerability of the Australian wine industry with over-supply and reduced export market penetration and they used it to their advantage.

“But that advantage is drying up.

“They won’t have as much wine available to them so what a supermarket will do to make the same amount of profit of course is put their prices up.

“They haven’t got the volume so they only matrix available is to move the price up and that’s why Australian consumers will see higher priced Australian wines on the shelves, for I see at the least the next five to 10 years. “

Mr Randall said consumers shouldn’t be upset at the increased prices due to having just had 15 years of “beautiful wine at good prices”.

But he said wine consumers were also probably unaware “just how tough the industry was doing it”.

There were plenty of reports about how many people were going broke in the Australian wine industry, how many receivers were appointed, water licenses sold and vineyards abandoned, he said.

“The average Australian wine consumer only wants to know how much they’re paying for a bottle but they’ve received tremendous value for money – world class value for money - and it’s about time it swung back the other way,” he said.

“The producers need to be enjoying some financial comfort that they haven’t enjoyed for a while, because a lot of the profits have been going to the supermarkets in that last retail sale.

“If you do a breakdown of the cost of production of a bottle of wine and how much the wholesaler gets, how much the retailer gets, and how much the government gets with a 10pc GST you’ll find the producer - who plants the vineyards, borrows all the money and takes all of the weather and agricultural risk - gets the least amount returned.”

“The Chinese are consuming about 1 litre of grape wine – there’s rice wine also – per head, per year and they have a population of 1.4 billion, so that’s 1.4 billion litres of wine and that’s what we produce,” he said.

Mr Edwards said he didn’t expect massive vineyard plantings on the back of the China demand due to issues with water availability of lack of suitable land for growing grapes.

“We‘re probably doing as much as anyone in Australia right now and we‘re ahead of the curve but we’re only doing it because we’ve got water and sites that are absolutely proven in terms of viticulture and the production of A and B grade wines,” he said.

“We are only looking at super premium wine production.”

Mr Edwards said Coles and Woolworths should be excited about the fact that they’ll be able to compete for Australian wines.

“Everyone in Australia likes to have a strong domestic presence, so it’ll hopefully lead to a lot of engagement from the grape/wine producers of Australia, with them providing priority for access to their wines,” he said.

“Healthy competition is good for everyone.”

But Mr Randall said Coles and Woolworths needed to avoid repeating its response to tight supply of the 1990’s when there was 20pc compound growth and they started to import cheap Chilean wine because they couldn’t secure enough Australian wine.

“It was all going to the UK and USA and the supermarkets suddenly though ‘oh we need to do something’ when all of the Australian wines moved up from $10 to $15 a bottle to $20 to $25 due to under supply,” he said.

“To fill the $10 to $15 bottle shelves they went out and imported some Chilean or Argentinian wines and that’s now NZ first go their big break and their wine onto Australian shelves, because they saw a shortage on our shelves and realised they could fill a gap.”