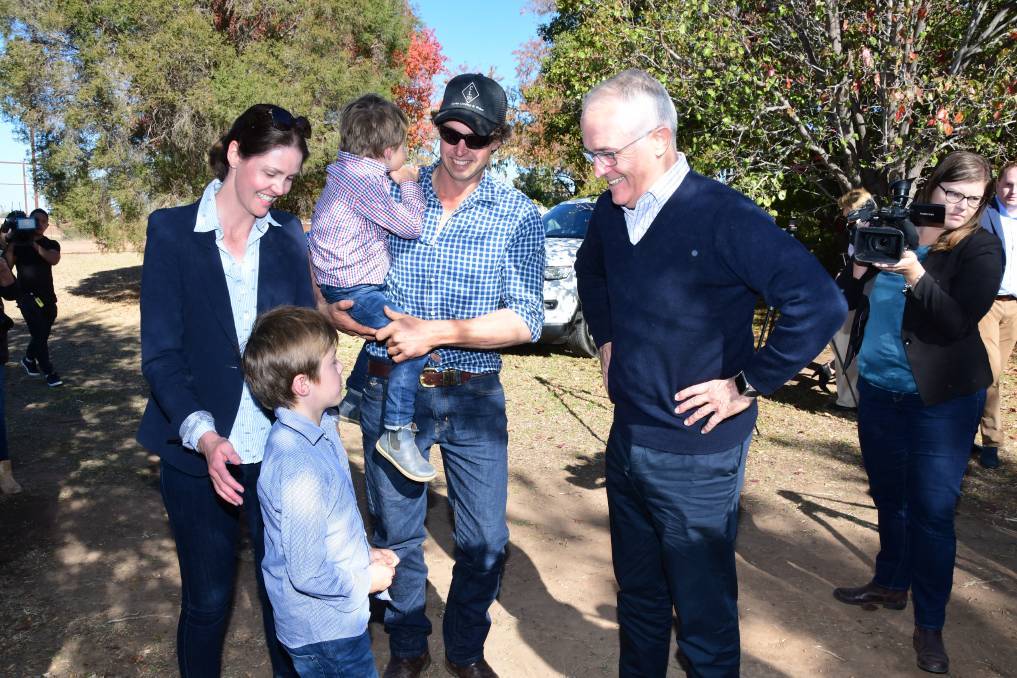 But while potential policy responses are still in the making, Malcolm Turnbull has put climate change resilience on the agenda.

“We are out there and listening, we want people to understand it is a priority for the government to see what is happening on the ground,” said the Nationals Leader Mr McCormack.

He was joined on the trip by Mr Turnbull and senior Nationals MPs Bridget McKenzie, Mark Coulton and David Littleproud as well as Liberal MP John McVeigh.

“I don’t want to pre-empt anything,” Mr McCormack said when asked if he had a timeline for the government’s response the drought which is tightening its grip across farming regions across the country.

“When we say we will look at one measure, there will be a false dawn so we don’t want to telegraph what we are going to do. It could well rain, you never know” he said.

“There was a wide ranging and robust discussion” which included multi-peril crop and farm insurance.

Mr Turnbull acknowledged the need for a policy response to climate variability and said government’s job was to “listen and provide support where we can”.

“Rainfall has always been variable in australia and it appears to be getting more variable, at least in this part of the world,” he said.

"We have to live within our means, but we have to help farmers build resilience."

Mr Turnbull’s remarks extend the narrative the Coalition has been slowly building around agriculture and climate change.

In March, Assistant Agriculture and Water Minister Anne Ruston said agricultural industries should drive their own response to adapt to the impacts of global warming.

“We will have all sorts of impacts from climate change… we need to rethink food systems, they have to become more resilient to shocks and disruption,” Ms Ruston said.

Labor Agriculture spokesman Joel Fitzgibbon welcomed the discussion on climate change and building resilience in agricultural industries, but questioned the need for consultation before action.

“I do believe the PM is trying to kick this down the road beyond the next election,” Mr Fitzgibbon said.

“A listening tour at this point in the drought cycle is ridiculous. What more do you need to learn?”

According to Mr Fitzgibobn they had an important role in reviewing implementation of an intergovernmental drought program that included the objective to assist farmers in building resilience to climate change into their enterprises.

“Drought can no longer be viewed as an “abnormal event”.  The main focus for policy makers and farm leadership groups must be helping farmers build resilience.

“The foundation for any drought policy must be adaptation and embrace natural resource management practices. More market-based programs are needed to incentivise soil health, water efficiency and carbon abatement.

“This is work that has to be done in conjunction with state governments. We have to rebuild COAG (the Council of Ausrtalian Governments).”

Mr Fitzgibbon acknowledged the benefits of the Coalition’s tax incentives to encourage farmers to save and invest in infrastructure.

The a policy paper will be prepared to help build the plan, including potential climate change scenarios and impacts over time; Analysis of risks and opportunities presented by climate change and; a review current adaptation policies across the country and a census of emissions reductions in the agriculture sector.

“We need to help farmers adapt and change as the climate changes, to protect our food production, our rural jobs and country towns,” Mr Littleproud said.

The tour will take in Dubbo, Trangie and Narromine in NSW as well as Blackhall, Charleville, and Boulia in Qld and will include other senior Nationals MPs.

Mr Turnbull said he also had in mind the needs of drought-hit areas across the country, which include Tasmania, Victoria and Western Australia.