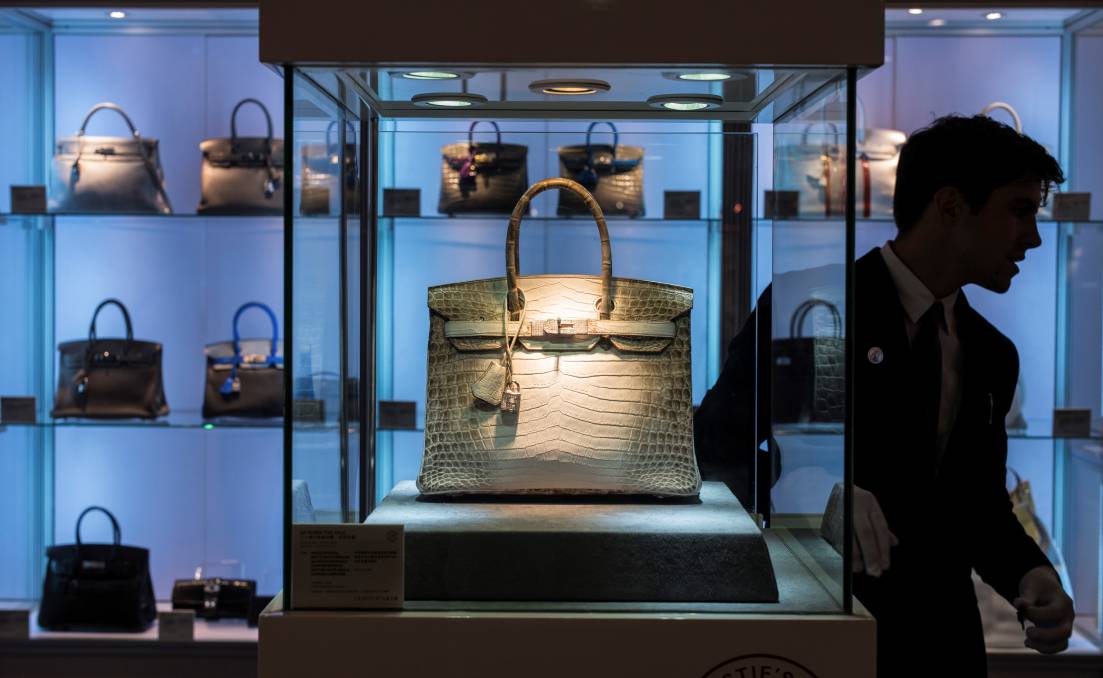 THIS Hermes Birkin crocodile handbag set with diamonds, on display at the Christe’s Auction in Hong Kong, sold to a private collector for a total of $300,168, just over the standard retail price of $280,000.

IT’S almost beyond comprehension that someone would have the money or desire to hand over a cool US$300,000 for a handbag but Australia’s emerging crocodile industry is counting on it being a permanent whim.

Solid money is being invested in upgrading infrastructure on crocodile farms to target the ultra premium skin market - fashion labels like Hermes, Luis Vuitton and Prada who are retailing exclusive luxury leather items that the uber wealthy go on ten-year waiting lists for.

To secure their supply of saltwater skins, recognised around the globe as the highest quality and most sought-after crocodilian product, high end fashion houses are even buying up northern Australian farms.

Industry estimates have around 80 per cent of the production capacity across the 14 crocodile farms in the Northern Territory, Queensland and Western Australia now in the hands of offshore fashion interests. 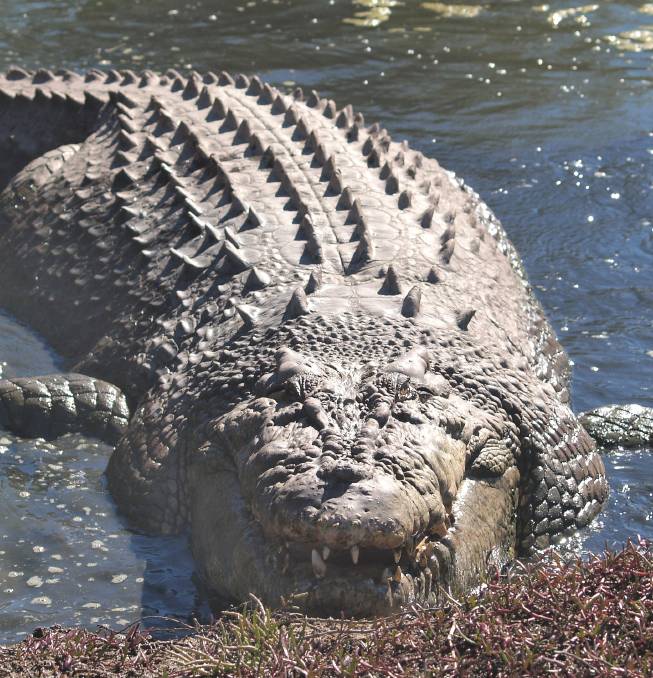 A croc from Koorana Farm in Central Queensland.

More than $30m a year in saltwater skins is being exported to tanneries around the world. The top grade processed skins go to brands producing the likes of handbags, belts and boots while second and third grade skins go into products like watchbands.

Australian farmers aim to turn off crocodiles at 1.8m long, 20 to 25 kilograms, at between three and four years, which produces a skin which, if it makes the top grade, brings $1000.

Farmers say typically less than half their turnoff makes the top grade. Third and fourth grades drop in price by half.

Ironically, during the global financial crisis, the luxury fashion market grew by 19pc.

“The affluent wanted to prove they were still really affluent,” said scientist Dr Sally Isberg, who has a PhD in crocodile genetics and runs the consultancy company, Centre for Crocodile Research.

There is an oversupply of lower grade skins at the moment but demand for the premium product can’t be met.

“Everybody aims for that top grade because the premium is enormous but it’s becoming tougher and tougher to meet the blemish-free standards,” said Central Queensland producer John Lever, Koorana Crocodile Farm at Coorooman.

“What we are doing is building more single pens, which allow us to isolate crocs for the final nine months to a year.”

The single pens come at a cost of $500 but provide time for blemishes to heal and significantly reduces competitive stress on the animals.

Crocodile industry leaders believe there is also big potential to increase value in the meat market, which currently brings around $100 from that 1.8m animal.

Most goes to the domestic market, for everything from steaks and kebabs to burgers, pies and stews. 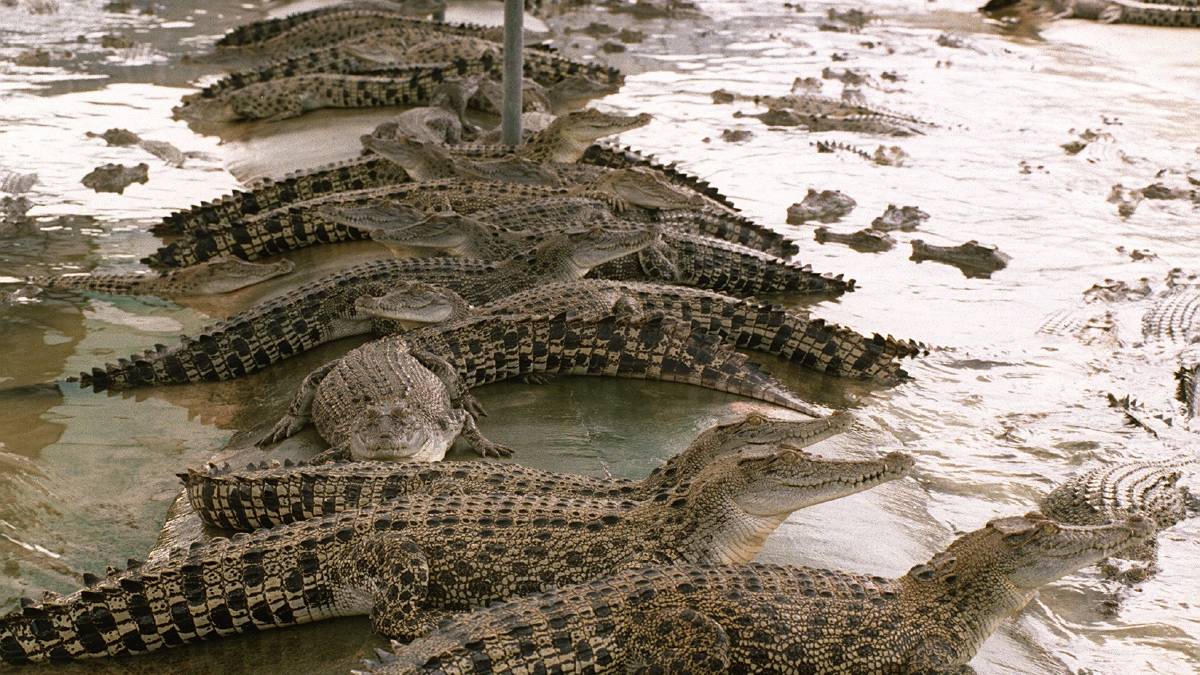 What is holding back demand appears to be a lack of marketing, consumer education on how to prepare the meat and poor experiences via imported croc meat that is generally very tough.

Mr Lever said he had exported meat to Japan in the past but was unable to supply at the volumes required consistently, so customers were forced to look to Vietnam and Cambodia instead.

And in a story typical of Australia’s red meat industry, a lack of trade access in China is costing farmers.

“We’ve had visits from hospital kitchen managers in Beijing wanting a whole year’s production, bone-in, which means less production costs for us so it would be a very lucrative market,” Mr Lever said.

“They make it into soups and a chowder and want it because of it’s proven anti-arthritic and anti-carcinogenic properties.

“But we can’t do it because there are no protocols for Australian crocodile meat into China.”

Other byproducts, such as gut and bone, are sold as dog food, which is snapped up quickly because the protein is different to red meat and credited with making coats glow and providing an alternative food for dogs with skin allergies.

Farmed crocodiles are produced via captive breeding or the regulated sustainable harvesting of eggs from the wild.

In the Lever’s case, a croc removal service has provided breeders which now produce around 2000 eggs a year and they harvest around 4000 eggs from the NT. 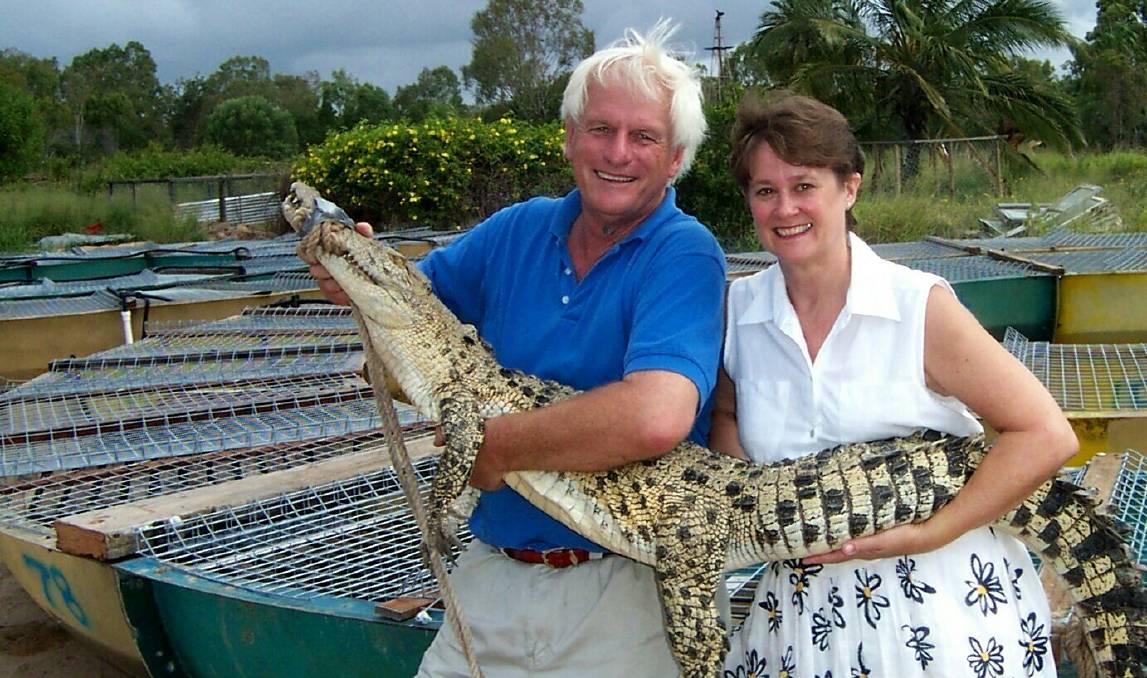 The incubation period takes 82 days at 32.5 degrees, then animals are moved to a temperature-controlled hatchling facility then to outdoor concrete rearing pens.

“When we first started in early 80s we had a target of 500 skins a year but the value of the skin has not kept up with cost of production increases so we’ve had to get bigger and deal in quality,” Mr Lever said.

Koorana skins go to a tanner in Italy.

Feed is the main cost of production.

They start off with wild pig meat or beef, with vitamins and minerals, powdered seaweed and amino acids mixed in, and are then weaned onto chicken.

Dr Isberg said Australian producers needed to find ways to gain a comparative advantage in nutrition because their competitors are third world countries with far cheaper costs of production.

Work is underway on artificial feed and pelletised diets.

Dr Isberg says there are now 185,000 production crocodiles in captivity.

She says “farming the cousins of dinosaurs” faces the same challenges as any other  intensive animal husbandry business.

“But crocs had a very different starting point to most - it started from obliteration of wild populations,” she said. 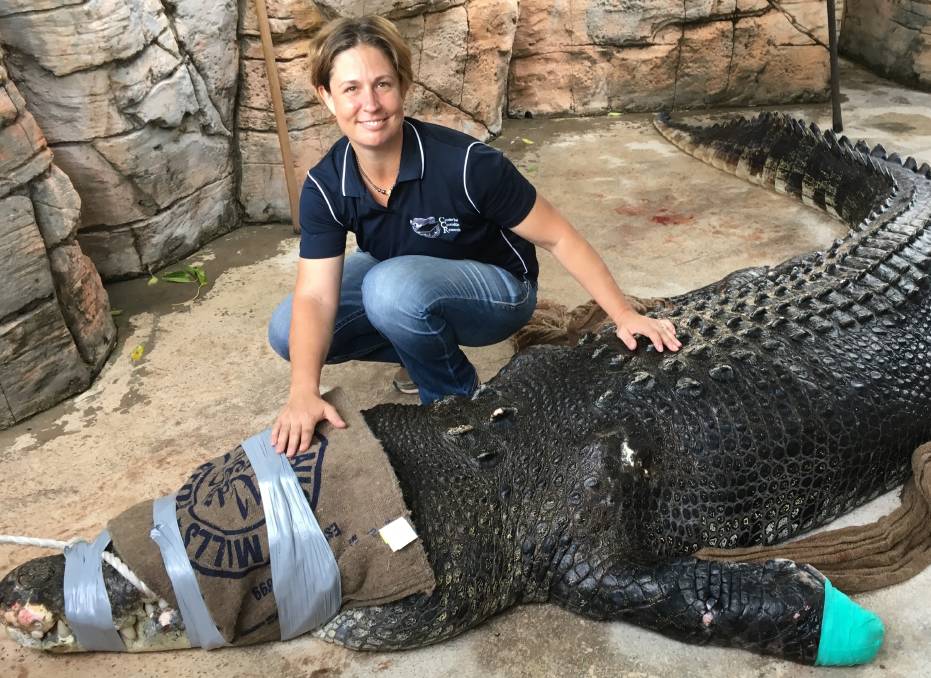 In the 1950s and 60s demand for skins made eradication of crocodiles economically attractive and saltwater crocodiles were almost hunted to extinction.

By 1974, they were officially protected throughout Australia.

Still, there was no incentive to conserve the species - they had no value, Dr Isberg explained.

“Cattle producers were losing stock to crocs so they would still shoot them.

“So some intelligent people said let’s wild harvest eggs to raise them in captivity. That will give the animals a value, allow us to compensate landowners to conserve them and also  put a value on their habitat so that is also conserved.

“Numbers are now back to pre-hunting so in terms of a conservation success story, this has been a worldwide gold standard.

“The eggs we now collect per annum could be tripled and still not have an impact on the wild population.”

Given that, and the demand, the industry is forecast to double over the next five years.

“Whatever global demand can’t be filled with saltwater skins, they fill with Nile croc and then American alligator,” Dr Isberg said. 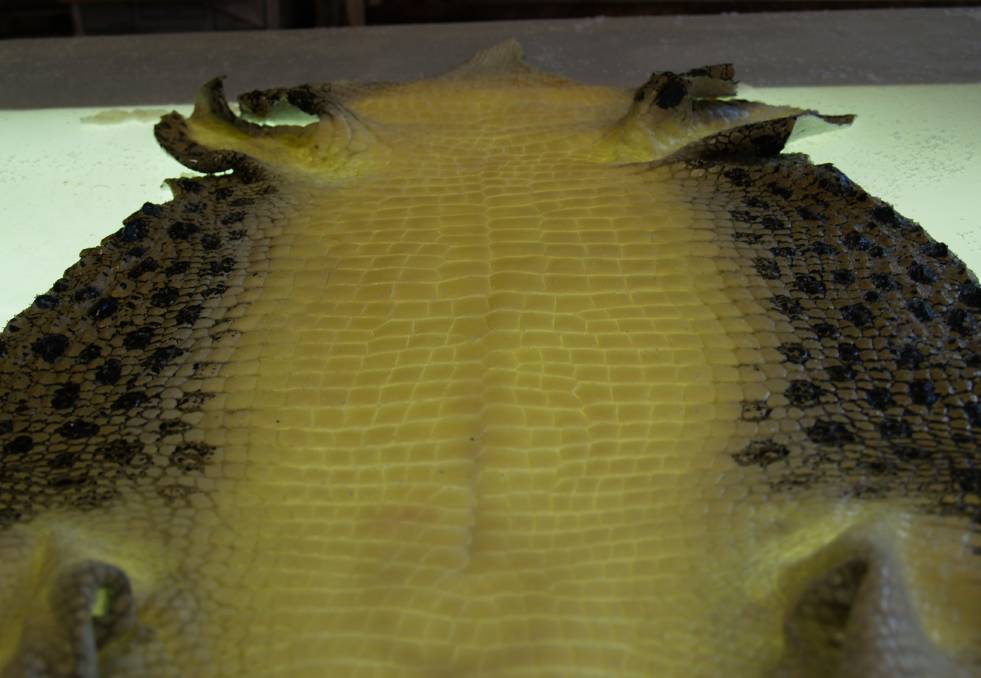 The saltwater premium comes from the large belly skin and the cross hatch pattern.

The most revered product is the Hermes Birkin handbag in a shade called Himalayan. One of these sold for US$350,00 recently - and it was second hand, Dr Isberg said.

“These handbags return around 10pc growth per annum. Only 19,000 are produced each year,” she said.

“So there are a lot more croc skins produced than make it to this market.”

“We as producers struggle to identify on the live animal what we should and shouldn’t harvest because these tiny flaws can’t be seen until the skin is on a light table post slaughter,” she said.

“No domestication equals no genetic selection - we have no idea when we collect a nest of eggs how they will do in captivity,” she said.

“We need to move into genomic selection. If, at the point of hatch, we could cull the 10pc that won’t perform we could increase our production efficiency substantially.” 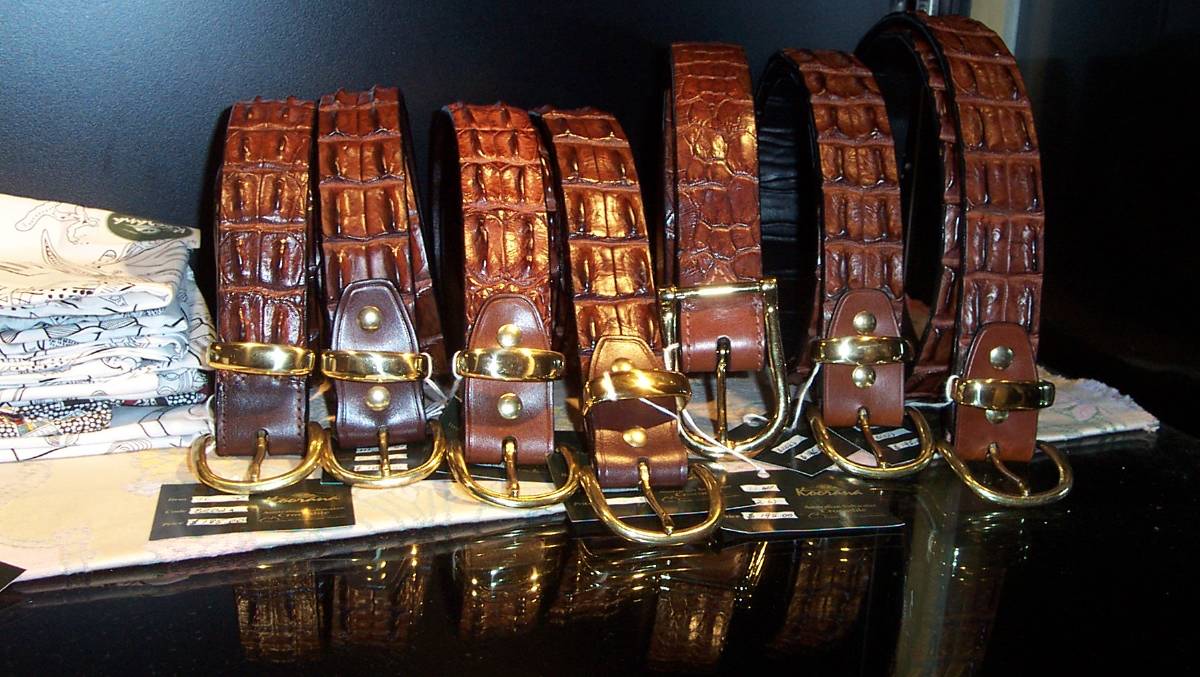 “While we don’t have an issue with them trying to eat other, as some people think, their eye tooth protrudes so as they slide over the top of each other they scratch the keratin layer on each other’s skin,” Dr Isberg said.

“They have to behaviourally thermoregulate, so we need to supply them with warmth during cool times of year and we need to think about heat stress.

“And they are semi aquatic. We have to give them land and water areas deep enough to allow them to submerge.”