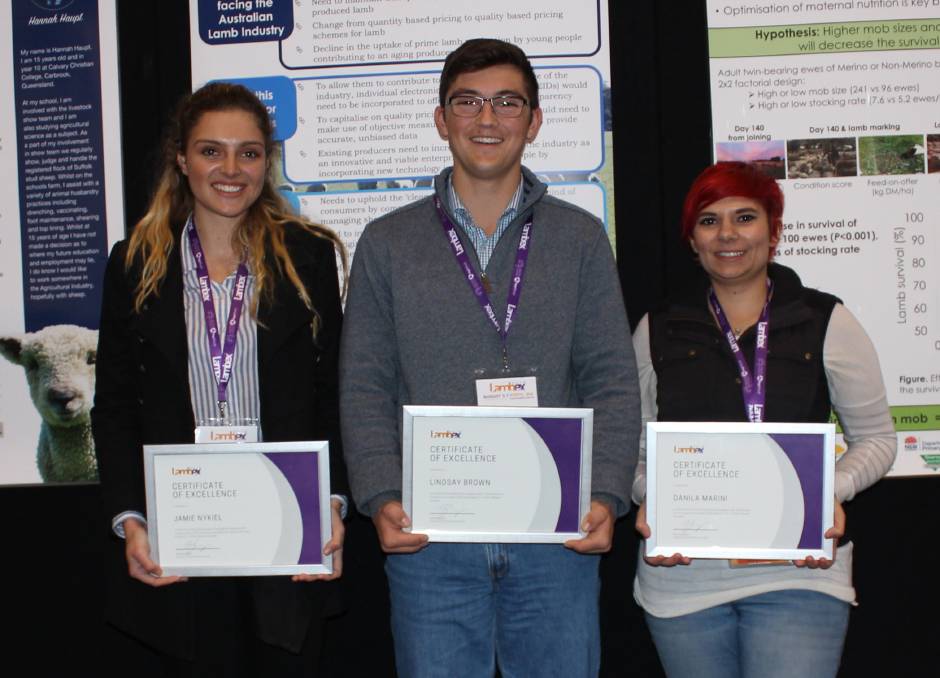 A NSW researcher, a WA uni student and a NSW high school student have taken out the honours.

They were selected from a field of nine finalists over categories covering young producers and professionals, undergraduate and postgraduate students and years 10-12 secondary school students.

The finalists were presented to the Monday afternoon session of LambEx 2018 at Perth Convention and Exhibition Centre before the winners in each category were announced.

Dr Marini, 27, who is undertaking post-doctorate research on virtual herding technologies at University of New England as part of the Rural R&D for Profit programme, said she was very appreciative of the competition and prize.

“It is just fantastic to be involved in the industry in this way and for LambEx to embrace the upcoming generation of students and professionals,” Dr Marini said after her win.

“It is also great to see that the work we (researchers) are doing is of interest to the industry and can make a difference,” she said.

A member of NSW Farmers and their animal welfare committee, she moved to Armidale from South Australia in 2013 after obtaining a Bachelor of Animal Science at the University of Adelaide with first class honours for her thesis on the effects of intrauterine growth restriction on stress responses in sheep.

Just returned from a study tour of China which included visits to sheep and cattle enterprises there, third-year Murdoch University Bachelor of Science student majoring in animal science and animal health, Ms Nykiel, 22, was also appreciative of LambEx and the Young Guns competition.

“I’m extremely excited to have won, it means (the industry) is leaning towards a brighter future and wanting to have a good representation of the younger generation coming up,” Ms Nykiel said.

Originally from Queensland and now living on campus, she represented WA at the National Merino Challenge and attended the UQBS Sheep Meat Value Chain training program.

Last year she was an associate judge for the Merino section at the IGA Perth Royal Show and also attended the AgVivo SIBI Sheep Camp.

“Winning was a bonus, I’m just happy to come across to Perth for LambEx,” he said.

Raised on a sheep and winter cropping farm near Beckom in the Riverina, Lindsay recently bought his own mob of 20 first cross ewes to produce his own prime lambs with the White Suffolk sires he has selected.

He is also involved with his school’s White Suffolk stud and ram sales, showing sheep at shows and participating in junior judging competitions, including the Sydney Royal Easter show at the state final.

He has already completed a Certificate IV in Woolclassing.

Lindsay said he planned a “gap year” helping on his parents’ farm, doing some wool classing and some work for the local wool broker when he completes secondary school.

“Then it’ll probably be off to university or whatever else comes up,” he said.

The competition aims to reward and encourage young and upcoming producers, industry professionals and scientists to consider a future or career in the lamb industry.

Each of the finalists had to get through a first round which included identifying and discussing key opportunities that in future will affect the Australian lamb and sheepmeat industry currently worth an estimated $4.38 billion to the national economy.

In the second round they had to design a poster and make an in-person presentation with questions from the four judges.

They were assessed on communication style, whether their presentation helped the audience understand the topic and how the audience reacted at a professional development workshop on the Sunday before LambEx was formally opened.

Sponsored by
Planting to kick off in the next week in southern NSW.
Test
'Every Australian dairy business plays a critical role in driving progress towards our 2030 goals.'
Test
Fonterra reviews ownership options for Australian business, including considering an IPO.
Test
SALRC announces it's 2021 award recipients
Test
Fewer deer are being hunted in Victoria despite the alarming rise in their numbers.
Test
The fake meat push has won the backing of some in Hollywood.
Test
Farmers want speedy access to another chemical to help combat the rapid spread of fall armyworm in sorghum and millet crops.
Test
First comprehensive review of Australian dairy processing industry's economic and broader contribution to Australian economy.
Test