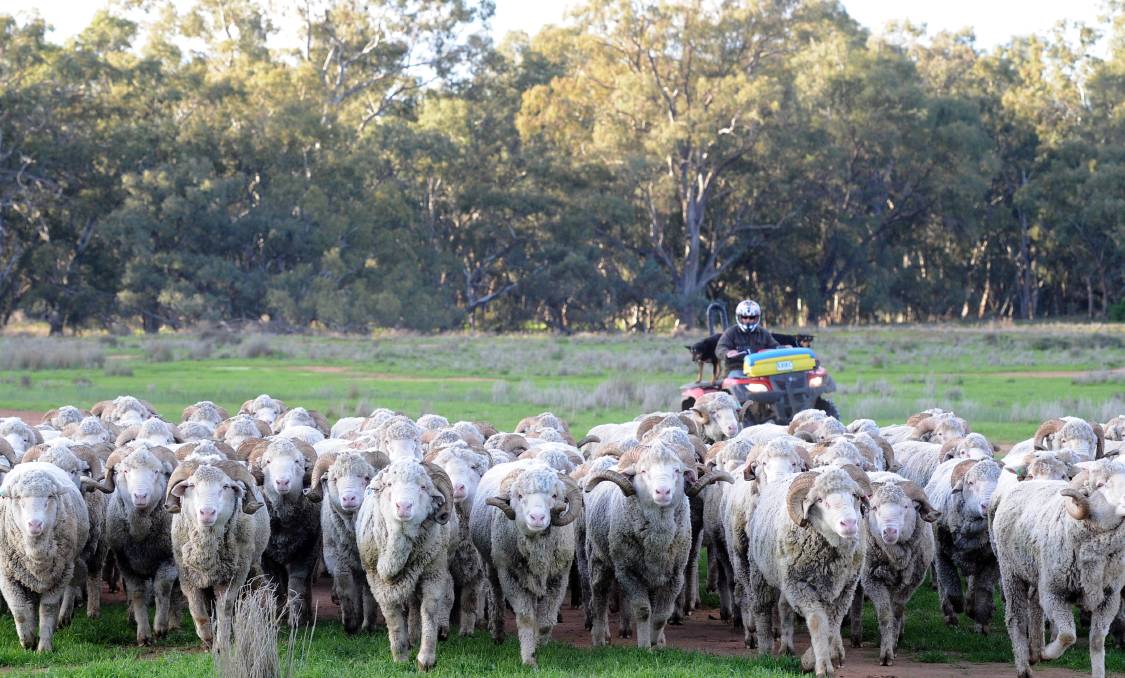 Mustering Merino rams on "Borambil" in southern NSW, one of more than 30 holdings in Paraway Pastoral's livestock property portfolio which now grows by another three after the the Hassad Australia sell-off.

Macquarie Group has confirmed it has wrapped up a deal with the Qatari-owned Hassad Food Group to buy more than 100,000 hectares of farmland Australia-wide.

No price has been disclosed, but industry observers have previously estimated the sale to be worth about $300 million.

The newly-launched Viridis Ag is understood to be taking over seven of the Hassad holdings in Western Australia, South Australia and NSW, primarily for grain production.

Viridis bought its first property the 16,500-hectare, “The Grange” at Dongara, WA, in January from livestock exporter, Mauro Balzarini, the chief executive of Wellard.

We are delighted with the transaction with Hassad and look forward to working together in the future” - Elizabeth O'Leary, Macquarie Infrastructure and Real Assets

The Hassad sell-off to Macquarie coincides with the Qatar Investment Authority, becoming an investor in one of MIRA’s agricultural portfolios through its Hassad subsidiary.

Hassad, which is now winding up its almost decade-long direct involvement in Australian agricultural production, said it had changed its investment direction after a strategic review of its business.

The review started a series of high profile property sales beginning two years ago with it offloading the first property it had purchased in Australia (in 2010), the 2632-hectare Kaladbro Station in Victoria, sold to SA pastoralists, Tom and Pat Brinkworth in late 2016.

That was followed by the mid-2017 sale of the former Clyde Agriculture aggregation, the  125,300ha Clover Downs, then aggregations “Glendale” near Clare, and “Ungarra” on SA’ Eyre Peninsula and the 9782-hectare Raby Station in Central West NSW late in the year.

However, it has declined to say which MIRA fund it has bought into, or how much it has contributed.

MIRA’s head of agriculture, Elizabeth O’Leary, said the asset management business was delighted with its transaction with Hassad and “we look forward to working together in the future”.

The Macquarie enterprise has built up an agricultural platform spanning more than 4 million hectares in the past decade, becoming one of Australia’s largest diversified farming operations.

Paraway Pastoral and Viridis Ag also gain the more than 40 staff who currently make up the on-farm management teams on the Hassad properties.

MIRA also plans to expand management teams at Orange, where Paraway is based, and Albury, which is headquarters for Viridis and Lawsons Grains.

Ms O’Leary described the Hassad farms as high quality assets, which would aid the investment group’s strategy of developing large-scale and diversified cropping and livestock production portfolios in Australia.

She said all necessary regulatory approvals had been obtained and the transition of the new properties was expected to be completed by year’s end.

Sponsored by
Years of love, sweat and tears have paid off for the owners of one of Australia's oldest pubs located in a small southern NSW town.
Test
Cooradigbee Homestead really should be blowing up bubbles from the bottom of the Burrunjuck Dam.
Test
Seasonal conditions across Australia were favorable leading to an improvement of nearly $3 million on the previous financial year's sales.
Test
South Australian dairy farmer Rick Gladigau was elected the president of the Australian Dairy Farmers board at its annual general meeting on Thursday.
Test
US investigation reveals how JBS cyber attack unfolded
Test
New director elections at the 2021 MLA AGM
Test
You can blame pandemic travel restrictions for Victoria falling short of one million fox scalps collected in the only government reward scheme of its type in Australia.
Test
Mutual looks to put farmers in the driving seat as carbon, bio markets emerge
Test