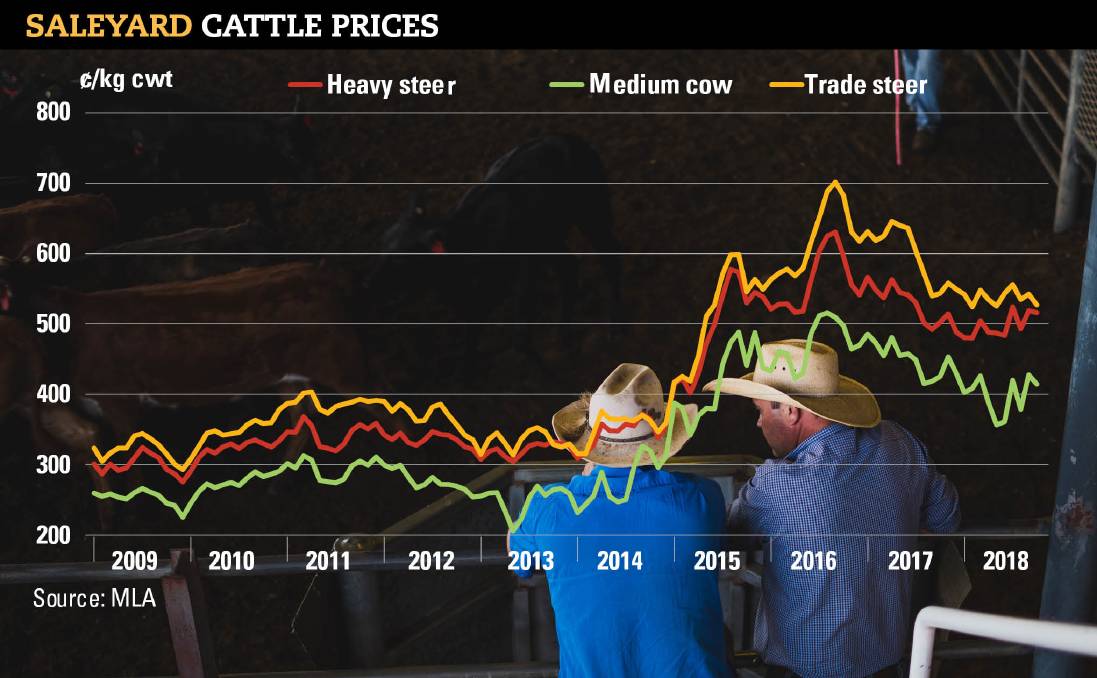 SHIFTS: By mid 2018, prices of finished cattle and those suitable to feed had held firm but the weather-driven market for young cattle was under heavy pressure.

IN April, the Eastern Young Cattle Indicator dipped below the 500 mark for the first time since mid-2015, when the Australian herd rebuild began in earnest.

It followed a mostly downward trajectory during May, finishing the month at 466.5c/kg.

By the end of July, despite a few upticks in the form of a little bit of rain here and there, a low Australian dollar and the ongoing strength of beef export markets, it was accepted the herd rebuild was off.

Projections were altered to have the national herd reaching its pre-drought levels by 2020.

“The recovery has by no means been uniform and so the availability of slaughter cattle has been variable right across the nation,” the National Livestock Reporting Service’s Brendan Wade explained.

MLA analysts in July spoke about a divergence in the cattle market.

Prices for finished cattle and those suitable to feed had either held firm or risen slightly, they said.

On the other hand, the weather-driven market for young cattle was under heavy pressure.

While the EYCI fell 8pc during the June quarter, other Eastern States saleyard indicators were more resilient.

Feeder steers fell just 1pc, with lot feeders maintaining a strong presence in saleyards, and the heavy steer indicator managed a 2pc gain over the quarter.

Big numbers of lighter and poorer condition cattle poured into saleyards through August.

Vealers typically have a premium on yearlings but that dynamic switched during this period.

The margin between better-conditioned and poorer cattle also widened.

Mecardo’s Angus Brown says the strong female slaughter should see a herd decline between one and four percent, heavily dependent on marking rates in Queensland.

“A  2pc decline in the herd will see it fall back to 2016 lows and we all know what that did to cattle prices when the rain finally came,” he said.

Despite a brief dip below 500c/kg in June, the Western Young Cattle Indicator has performed well in 2018, averaging 549c/kg cwt, up 41c or eight per cent on the five-year average.

By the end of October, the WYCI was at 565c/kg, up 68c on the five-year October average. Continuing a trend that has been apparent throughout 2018, the WYCI sat at a 27c, or 5pc, premium to the EYCI by the latter part of the year.

That reflected closer-to-average seasonal conditions in southwest WA compared to production regions in the eastern states.