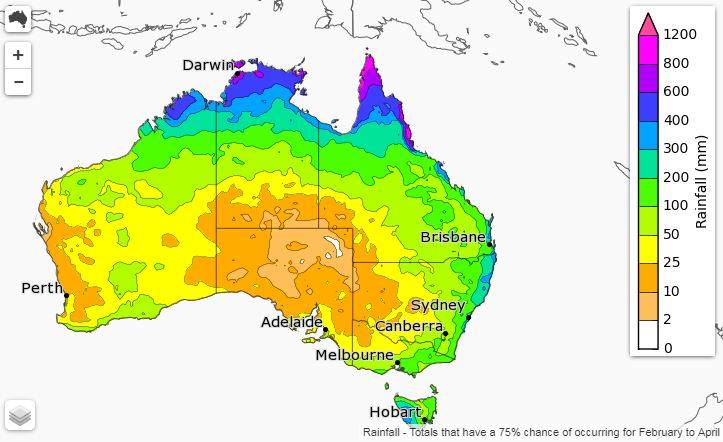 Rainfall totals that have a 75 per cent chance of occurring for February to April. Released by the BoM on January 17.

The Bureau of Meteorology has downgraded its ENSO Outlook to "El Niño Watch".

The Bureau of Meteorology has downgraded its ENSO Outlook to "El Niño Watch" meaning the chance of an El Niño forming this year is 50 per cent, or roughly double the normal likelihood.

The Outlook was previously at "El Niño Alert", meaning there was a 70 per cent chance of formation.

Bureau climatologist Felicity Gamble said there had been some observed changes in the tropical Pacific Ocean which reduced the likelihood of formation in the coming few months.

"The Pacific Ocean remains warmer than normal, but it has cooled in recent weeks which has reduced the chances of an El Niño taking hold for now," Ms Gamble said.

"However, with the temperatures in the Pacific Ocean still elevated, a number of climate models are predicting the possibility of an El Niño forming in mid-2019.

"The Bureau of Meteorology is closely monitoring the situation and will continue to provide the Australian public with regular updates."

El Niños have traditionally resulted in warmer and drier conditions for eastern and southern Australia, however the strength of an El Niño does not necessarily correspond with its impact on Australian rainfall.

Ms Gamble said despite the ENSO Outlook being downgraded, the potential for El Niño remained, and this along with other local climate drivers meant the next three months were expected to be warmer and drier than average for many parts of the country.

Meanwhile the Bureau has released its February to April 2019 climate outlook, pointing to a drier than normal three months for most of WA, western parts of northern NT and SA, and much of eastern mainland Australia.

The rest of the country shows no strong push towards a wetter or drier than median season.

Warmer than median days and nights are likely for almost all of Australia for February to April.

For daytime temperatures, the chances of being warmer than median are very high, greater than 80pc for most of the country. 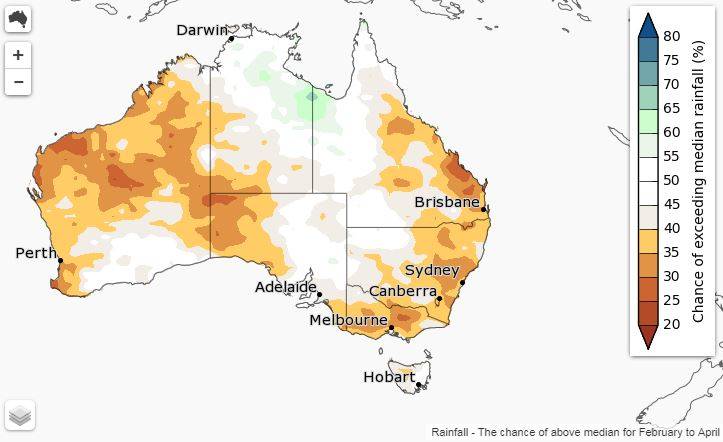 The change of above median rainfall for February to April.

Historical outlook accuracy for February to April is moderate across most of mainland Australia and northern Tasmania.

However, over southwestern Australia, southern SA, western and central Victoria, and southern Tasmania accuracy is low to very low.